Despite the occupation they endured, even confronted by pellet guns, Kashmiris have always taken time to rally for Palestine, the Rohingya, the Syrian Arab Spring, Central Africa, little Asifa. Just every once in a while someone of them would express frustration that so little solidarity came their way. Of course, mostly that was due to the news blackout which prevailed until Kashmiri activists began using social media to educate & campaign for #azaadi. Wouldn’t you give anything for them to know at such a dark time for them that for the first time, as a result of their painstaking work on social media, an international movement of solidarity with Kashmir is taking shape? They no longer stand alone.

A few years ago, after reading articles about Indian hydroelectric projects in Kashmir, I asked Kashmiris to discuss that here on Facebook. They collectively presented volumes of information about India’s economic exploitation of Kashmir, including but not only hydroelectric power for India. Opposition to Kashmiri self-determination is not just a real estate matter. In that regard, this comment by Jairus Banaji in his piece today on Kashmir should be highlighted: “A facebook friend commented that the annexation of Kashmir has been driven by “a desire to put Muslims in their place and have them crawl before their Hindu masters” (comment by Amitabha Pande). To this one might add that the true target of Kashmir’s subsumption into what is rapidly becoming a Hindu state is Article 35A, because that is widely perceived as a hindrance to “freeing” the resources of the Valley and to its unfettered economic exploitation (euphemisically called “vikas”) by powerful business interests linked to the present government.”

Believe it or not, I try not to post too much. But in a crisis I go into campaign mode & don’t want to leave a stone unturned. It’s the way I deal with anxiety about what’s happening. If it’s getting on your nerves, just mute me for awhile cause I’m incorrigible that way.

Since fascist Eva Bartlett has never made a secret of her associations with dangerous screwballs like David Icke (who believes the world is run by extraterrestrial reptiles morphed into Jewish bankers) or European fascist leaders, it’s hard to understand why Assadists & Stalinists aren’t at least a little uncomfortable touring her around & inviting her along on all their “peace delegations” to denounce popular movements & suck up to dictators. Not that they don’t see eye to eye with her stinking rotten politics but there is that little matter of image to keep pulling the wool over the eyes of deep conspiracy thinkers like Tariq Ali, Robert Fisk, or cultist Jeff Mackler.

Fascist propaganda must pay well since she just spent time with her handlers in Damascus & now is in Moscow to denounce the protests as orchestrated by the nefarious forces of democracy to carry out a “regime-change operation.” She’s got that right. Russians don’t like dictators any more than Syrians or Venezuelans. But hapless Eva, who looks more & more like the Joker, should consider the company she hangs out with if she wants to keep the honoraria & honorifics flowing her way. This creep is Robert Bridge, an American writer for RT who lives in Moscow. Bridge openly campaigns against LGBT rights & is homophobic up to his hairy eyeballs. He is an avowed white supremacist who agrees with Tucker Carlson of Fox News that white supremacy is a hoax & thinks medications cause the massacres by white nationalists in the US, not racism. The poor boys were overdosed on antidepressants, not hatred for Blacks, Latinos, immigrants, & women as they proclaim in their manifestos. He is openly anti-immigration & xenophobic & promotes a barrier wall around Europe to keep refugees out. He works for RT because he’s Putin’s little lap dog & because his politics stink. One only has to look at his FB or Twitter walls to see what a contemptible swine he is along with being Bartlett’s friend & colleague.

(Photo of Bartlett & Bridge from FB)

Pakistan Prime Minister Imran Khan has called on Trump to mediate on Kashmir. After declaring Jerusalem the capital of Israel? After the scam called ‘the deal of the century’ selling Palestinians down the river? After incitement to violence against Muslims, Blacks, Mexicans, women, immigrants & refugees? This alone should get Khan declared legally insane.

Hundreds of Indians in Delhi protest military onslaught against Kashmir. 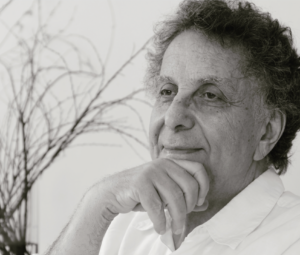 Palestinian artist Kamal Boullata has died in Berlin at the age of 77. I met him in 1970 as an activist in Palestine solidarity at the University of Minnesota. He was instrumental in educating me about the Palestinian struggle & in forging my commitment to it. He was a deeply intellectual person & has left an entire body of writings on Arabic art along with his magnificent body of art work & many political posters. I will be forever grateful to him for giving me a visceral as well as a political commitment to Palestinians. May he Rest In Peace.

Tulsi Gabbard said, “I will talk with brutal dictators anywhere in the world if I can prevent one of my brother & sisters in uniform from dying on foreign soil in senseless regime change wars.”

Sana Saeed of Al Jazeera asks, “Will Gabbard, who has supported Modi/BJP, condemn the Modi government’s bastardization of the Indian constitution & placing over 7 million under lockdown, revoking their rights? She’s said in the past she doesn’t “agree with all the practices” of the Indian government – what about this?”

One never knows what will set off a Facebook censor & incur a suspension but we’ve known for a long time that they target Kashmiris & their supporters right & left. Last year, I spent three months on suspension for offenses that amounted to nonsense, including one comparing the Palestinian & Kashmiri struggles. I’m blunt-spoken but hate is no part of my nature–at least if you distinguish sarcasm from hate. I want to #standwithKashmir & can’t be looking over my shoulder for the censors every time I make a post. If they nab me on some silly hate speech charge (like the Kashmiri video which 2,000 others also shared), please follow me on Twitter or on my blog. But above all, you can continue to read & share posts from: https://www.facebook.com/StandWithKashmir/? 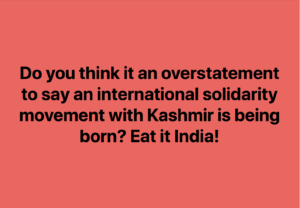