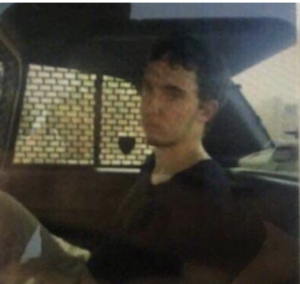 Patrick Crusias, a 21-year-old white guy from Dallas, Texas shot up a Walmart in El Paso, Texas today, killing 20 shoppers & injuring dozens of others. He is a Trump supporter & white supremacist who opposes immigration & “race-mixing.” This kind of incident & these kinds of creeps will continue to come out from under their rocks until we build a massive counter-movement to the Trump agenda & inflammatory rhetoric which pits whites against Blacks, Latinos, immigrants, refugees.

Our sincere condolences to the families & friends of those killed. As one of millions living on the US border with Mexico, we are keenly aware that this could have happened to us.

No human being is alien to us.

Perhaps some think I hammer away at the corruption of the antiwar movement way too much. But I consider its endorsement of the Assad dictatorship & Syrian & Russian bombing of Syria combined with its complete inaction against US military intervention in Syria, Iraq, Afghanistan, Yemen, Somalia, & elsewhere to be a betrayal of antiwar principles of historic proportions which has destroyed the movement beyond repair. A new movement must be built which incorporates the Palestinian, Kashmiri, Rohingya, Venezuelan, & Uyghur struggles. Building a new movement is not an easy mission. But we can use social media to forge a movement that is truly international in perspective & leadership, uncompromising in opposition to militarism,  fearless & constant in support for those on the front lines of oppression. 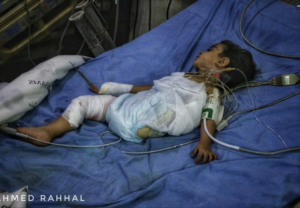 This is little Yara Badawi from Ariha, Idlib who lost her leg in a Syrian or Russian airstrike. Her mother was seriously injured & her father was killed. Assad officials & propagandists claim this is the work of terrorists; the corrupted antiwar movement goes even further & says there are no civilians in Idlib, only terrorists. So can they tell us which al-Qaeda group this little girl was commanding when Syrian or Russian bombers caught up with her? And was this “worth it”, as Madeleine Albright would say, to prevent a “US regime-change operation”? 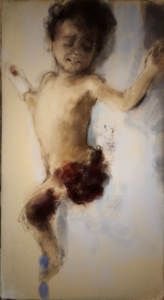 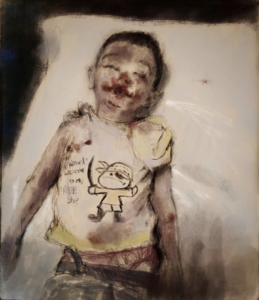 A child in Idlib injured in Syrian or Russian bombing of homes, schools, hospitals, mosques, farm fields: we don’t know if this child recovered physically. We only know that if he did, war will mark his life forever as war, concentration camps, occupation, & genocide always do. 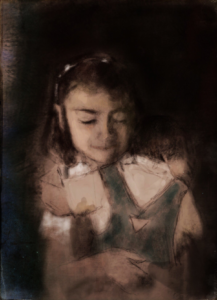 If you wonder why the antiwar movement is corrupted beyond redemption & has lost the capacity, with its present misleaders, to transform itself, it can only be explained by white supremacy & acceptance of the Islamophobic ideology of the so-called ‘war on terror’. How else do you explain that they are holding forums on how persecuted Putin & Russia are or on the legal problems of a handful of grandstanders who occupied an abandoned embassy in Washington DC rather than organizing rallies against the slaughter of children & civilians in Idlib? In fact, there isn’t a single recorded objection to the bombing of Idlib by those long associated with the antiwar movement.

This sketch by artist Marc Nelson is a tribute to five-year-old Riham al-Abdullah who died last month trying to save her baby sister after a Syrian or Russian airstrike on their residence in Idlib province. She died along with her mother & three-year-old sister. May they Rest In Peace.

The most imperative mission of our times is to rebuild an international antiwar movement on a principled basis. When we see the absolute silence on the carpet bombing of Idlib, the relative passivity on the genocide in Gaza, & note that there is no antiwar response in India to the massive buildup of troops in Kashmir, we can see the problem is not just with western political forces but is an international problem. There needs to be an assessment about how this corruption of principles came to be & that analysis will be part of rebuilding a movement rooted in long-established antiwar principles, including the principle that ‘an injury to one is an injury to all.’

A useful article on the buildup of Indian troops in Kashmir:

“One of the well-placed CRPF officers revealed to The Quint on the condition of anonymity that the actual number of paramilitary personnel being ferried to the Valley, over the last eight days, had touched its target of 180,000.”

“As the Indian state launches a fresh assault on Kashmiris, not a single protest is happening in mainland India, not even a candlelight protest. Tells you how the civil society in India, if any, is OK, and in fact complicit, with the brutalization, the dehumanization of Kashmiris.”

A woman who claimed to support the Kashmiri struggle blocked me after I posted about the Palestinian Nakba creating over 12 million refugees. The political parallels between Kashmir & Palestine are inescapable from their roots in the treacheries of British colonialism, the comparable ideological roles of Zionism & Hindutva nationalism, colonialism & brutal military occupations, Intifada & resistance, the military alliance between Israel & India. It’s hard to understand how she can grasp one reality & not the other but cognitive dissonance plays a big part in politics as we see also in the Assadist alliance between Stalinists & fascists with confusionists who denounce US military intervention in Syria but support dictatorship & Syrian & Russian bombing of civilians. 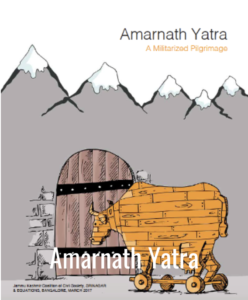 No slouches at colonial treachery, the UK, Germany, & Australia issued travel advisories to their citizens against traveling to Jammu & Kashmir after J&K officials issued a security alert claiming they had intelligence about planned terrorist attacks on Hindu pilgrims. In 2017, the Jammu & Kashmir Coalition of Civil Society (JKCCS) issued a report on the Amarnath Yatra Hindu pilgrimage titled “Amarnath Yatra: A Militarized Pilgrimage” which is worth rereading to see how that pilgrimage is used as part of the occupation. The pilgrims are not & never were in any danger from Kashmiris despite its politicized character.