Last week some UN committee voted to prod the Security Council to refer North Korea to the International Criminal Court for indictment on crimes against humanity. Today North Korea gave a mighty riposte in response to the murder of Michael Brown & the grand jury verdict letting the killer walk by calling the US “a tundra of human rights.” Anybody want to argue with that?

Who would imagine the US media would be a source of truth on the grand jury verdict allowing the killer cop to walk? Perhaps a section of the ruling elite has the perspicacity & survival instincts to recognize what a colossally stupid political mistake that was–generating outrage & resistance around this country & elsewhere. But reporter Lawrence O’Donnell on MSNBC reported the Assistant Prosecutor intentionally misled the grand jury by using a 1979 Missouri law declared unconstitutional by the US Supreme Court about the use of deadly force against a fleeing suspect.

Does anyone have any ideas? Please listen to this brief description of the mockery of justice & think about what we might do:

So a couple days ago the New York Times had the headline “Should Immigrants Have Human Rights?” The article is behind a paywall so without a subscription you can’t access it but the question alone stands as a monument to neoliberal stupidity, insularity, & barbarism. What human rights do they think should be denied immigrants? Food? Healthcare? Housing? Education? Do they even consider those human rights? If you talk to most working people, our set of human rights does include them but if you talk to the powers-that-be, those rights are behind a paywall.

The Universal Declaration of Human Rights formulated by the UN isn’t much use in clarifying those rights but it does talk about freedom from torture, enslavement, arbitrary incarceration, asylum, due process, religious freedom, & no arbitrary deprivation of property. When you read it, you realize almost every country on earth should be indicted on multiple counts. The US has a rap sheet so long it’ll take decades of special tribunals to address them all. The murder of Michael Brown & the denial of the Bill of Rights in Ferguson are only the latest instance of charges that also include Afghanistan, Iraq, Somalia, Palestine, Mexico, Guatemala, & too many other places to mention–all in violation of the Universal Declaration of Human Rights. Because if there is one thing at odds with human rights, it is neoliberalism, the barbaric phase of capitalism. The force of that system respects nothing & mows everything & everyone down before it that stand in the way of massive profiteering.

The NY Times cannot be accused of stupidity. Duplicity yes, but not stupidity. They know damn well immigrants are denied all human rights in this country–including safety protections, due process, asylum, arbitrary arrest & incarceration. Is the NY Times trying to get a popular mandate from it’s elite readership on continuing that policy?

The answer can only be “Of course immigrants should have human rights–every damn one of them–for no other reason than they are human.”

There’s a few compelling reasons to participate tomorrow in Black Friday Walmart to support Walmart workers: full-time workers earn chump change, are forced to seek government assistance for health care, & are “food insecure” (the polite euphemism for starving hungry). They are also treated in such a demeaning way that my younger brother with a learning disability refused to even apply when he couldn’t find work elsewhere.

A second reason is their central involvement in the sweatshop economy & the flagrancy of their response to catastrophes like the fire at Tazreen Fashions & collapse of Rana Plaza in Dhaka, Bangladesh. They have not altered safety standards nor provided compensation to those who lost beloved family members.

Putting the big squeeze on Walmart puts a chokehold on their super-exploitation of human beings in their retail stores & among their suppliers. It signals the beginning–& just the beginning–of the end of sweatshop labor.

If you can’t join the picket lines around the stores, for heaven’s sake consider yourself felonious if you enter the store to shop. There are some things that are just unpardonable.

Let me speculate a bit since I haven’t finished investigating what’s going on in Ferguson. When 90 people (including myself) were arrested at an animal rights protest in Minneapolis in 2001, US police were again using riot cops, tear gas, pepper spray against unarmed peaceful protesters. They had relaunched aggressive police methods at the 1999 WTO protests in Seattle–methods which the Civil Rights Movement had defeated along with the antiwar movement.

Of the 90 people arrested, nearly half were released as undercover cops. Most activists opted out of trial but I’ll be damned if I would. One of the smug-faced, nasty-assed undercover cops came to testify against me & the two other defendants. Videos disproved her testimony & proved ours.

Before people get carried away about looting & burning in Ferguson, it might be wiser to think police agents instigating trouble to discredit the Black community. Nice try but that won’t stop the rebirth of Black power. It will however justify repression in Ferguson so solidarity actions which are going on in 37 US states are of paramount importance. 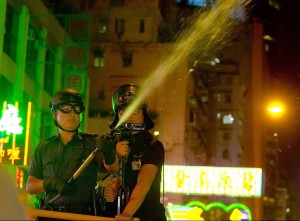 Riot cops armed with pepper spray hoses & beating on students with truncheons began clearing out the democracy encampment in the Mong Kok district of Hong Kong. They did so under a court order granted a minibus company in the district claiming the encampment was hurting its business. It would have been unseemly to grant the court order to one of the strip bars or brothels in the area whose business was most affected. While police attacked protesters there was the ironic spectacle of brothel owners & strip club bouncers standing on the sidelines cheering. As he gave a thumbs-up to the police one said, “The Communist Party will never surrender.” Eyeyey!

The 7,000 cops deployed didn’t have an easy go of the removal as hundreds more joined the protests in defense. As the work day ended, hundreds more just off work also entered the fray. As riot cops moved in with pepper spray hoses, protesters took to social media Twittering for reinforcements: “Bring helmets, goggles, shields, umbrellas, towels & be careful!”

It appears the now two-month protests will not force a retreat on the undemocratic election procedures which ignited the uprising. But that doesn’t make them a defeat. Social transformation is a more difficult & protracted struggle than that. Beijing & the Hong Kong tycoons would love to unleash the kind of terror they used in Tiananmen Square in 1989 against democracy protesters but they are restrained in a way they weren’t then. Fear that a military assault on the Hong Kong protesters will trigger protest & solidarity on the mainland is the chief restraint. Hong Kong activists organize an annual protest commemorating Tiananmen Square & demanding justice. No matter how much Beijing blocks media reports on the mainland about the protests, news is certainly getting through–if only from the mainland shoppers at the upscale shopping mall in Mong Kok overlooking the protest site.

Media has started the image remake of Darren Wilson from killer cop to nice guy just doing his job. The ever-smarmy George Stephanopoulos on Good Morning America was just the right guy for the first volley. They may want to reconsider this strategy since Wilson doesn’t comport himself that well playing the real victim of his crime. He’s a cold-fish & his answers are coached as he tries to portray himself as an “ordinary guy” just working toward a decent pension. Ordinary guys don’t kill young people in cold blood.

Images of looting in Ferguson are starting to circulate. Expect to be inundated with them. It’s all about discrediting justice & justifying cop terror. Looting is always the main charge against Blacks from Ferguson to Hurricane Katrina to Haiti. Think combustible injustice. In a situation like Ferguson, think also agents provocateurs.

Shaking the naughty finger at looting is a moralistic, presbyterian response to acute social trauma. Use the finger for something more useful. 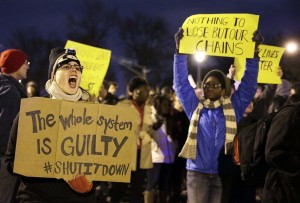 For days leading up to the grand jury verdict in Ferguson, state & police authorities prepared us for a violent backlash from the Black community if the killer cop wasn’t indicted. They called a state of emergency & deployed the National Guard & special operatives from the FBI in addition to having local & state troopers on high military readiness. The political purpose of all that was to portray the Black community as feral, violent, out of control & to justify any political violence against protests if the verdict was unfavorable–protests protected under the Bill of Rights. Whether police authorities like it or not, the Bill of Rights is supposed to prevail in the Black community also.

The Black community in this country has a long history of police SWAT teams. They well know what kind of police violence any extreme behavior (or just walking down the street) will provoke. There was a little looting reported last night & a cop car overturned. Some young people can get quite testy when you legitimize the right to shoot them down with impunity. And there’s also such a thing as agents provocateurs. But what’s going on in Ferguson has always been peaceful protesters facing off against a military operation attempting to deny them their freedoms under the Bill of Rights. The violence in Ferguson is one-sided. Justice stands on the other side.

Fullest solidarity with the Black community who are leading the formation of a new civil rights & Black power movement.

Obama called on the nation to accept the Ferguson grand jury decision not to indict the killer cop. Most of his speech was exhortations to the Black community not to vandalize or get violent. But they’re not the ones coming armed to the teeth with tear gas, stun grenades, armored vehicles. What about some exhortations to the cops?

He said, “In too many parts of this country, a deep distrust exists between law enforcement & communities of color. But there’s never an excuse for violence.” He should have been a preacher. Cause what this whole thing is about is unprovoked rampant police violence against Black teens in every city across this country including harassment, stop & frisk, outright murder, & a pipeline to jail for minor offenses.