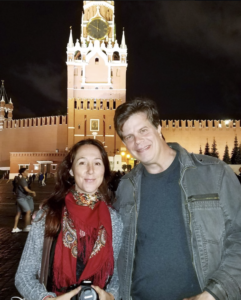 Since fascist Eva Bartlett has never made a secret of her associations with dangerous screwballs like David Icke (who believes the world is run by extraterrestrial reptiles morphed into Jewish bankers) or European fascist leaders, it’s hard to understand why Assadists & Stalinists aren’t at least a little uncomfortable touring her around & inviting her along on all their “peace delegations” to denounce popular movements & suck up to dictators. Not that they don’t see eye to eye with her stinking rotten politics but there is that little matter of image to keep pulling the wool over the eyes of deep conspiracy thinkers like Tariq Ali, Robert Fisk, or cultist Jeff Mackler.

Fascist propaganda must pay well since she just spent time with her handlers in Damascus & now is in Moscow to denounce the protests as orchestrated by the nefarious forces of democracy to carry out a “regime-change operation.” She’s got that right. Russians don’t like dictators any more than Syrians or Venezuelans. But hapless Eva, who looks more & more like the Joker, should consider the company she hangs out with if she wants to keep the honoraria & honorifics flowing her way. This creep is Robert Bridge, an American writer for RT who lives in Moscow. Bridge openly campaigns against LGBT rights & is homophobic up to his hairy eyeballs. He is an avowed white supremacist who agrees with Tucker Carlson of Fox News that white supremacy is a hoax & thinks medications cause the massacres by white nationalists in the US, not racism. The poor boys were overdosed on antidepressants, not hatred for Blacks, Latinos, immigrants, & women as they proclaim in their manifestos. He is openly anti-immigration & xenophobic & promotes a barrier wall around Europe to keep refugees out. He works for RT because he’s Putin’s little lap dog & because his politics stink. One only has to look at his FB or Twitter walls to see what a contemptible swine he is along with being Bartlett’s friend & colleague.

(Photo of Bartlett & Bridge from FB)