There are millions of working people, including small children, who earn their livings doing this kind of hard, dangerous work with no protection & every possibility of death or permanent disability. There’s a long list of possible injuries these two laborers in Dhaka, Bangladesh could sustain–from back injuries to ruptures to being crushed to death. If society has the capability of splitting atoms & rocketing to the moon & if it is producing billionaires in every country from our labor, it sure as hell can provide appropriate equipment to get the work done without risking people’s lives. 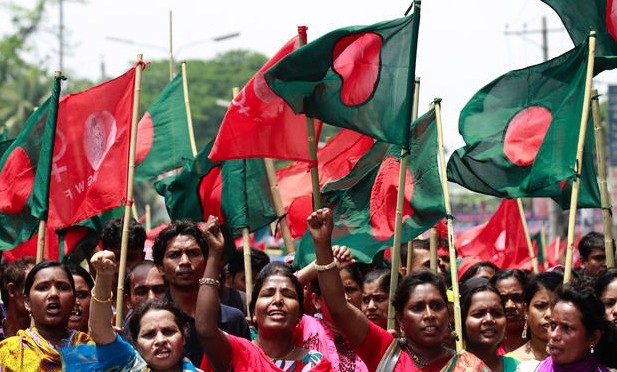 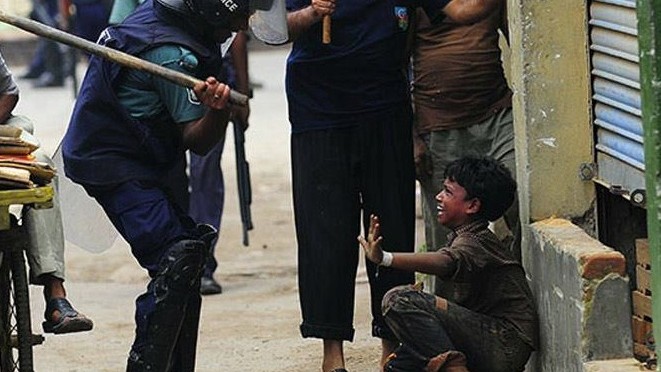 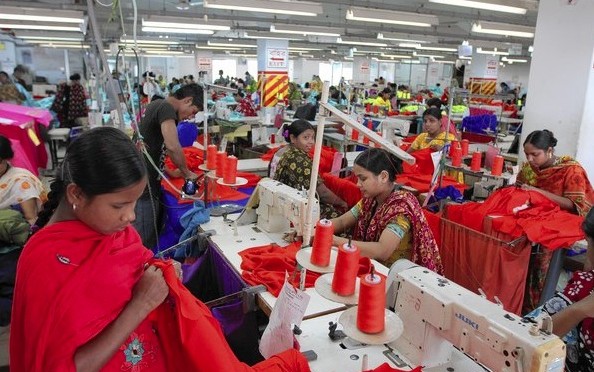 The sweatshop industry isn’t going down without a fight. To counter the harrowing images & news from Bangladesh & Cambodian garment factories, they’ve launched a public relations campaign. They’ve thrown down the gauntlet & are going to fight their way back from damnation to respectability. The first volley came in a Los Angeles Times series by a reporter named Kenneth R. Weiss. Our man Weiss holds many journalist awards–which says nothing about his talents but plenty about the state of US journalism. Suitably, he holds a bachelor’s degree in folklore & probably a minor in active imagination. He was given a grant from the Pulitzer Center on Crisis Reporting to fabricate fairy tales on sweatshop workers in Bangladesh.

In the banal journalistic style so popular today, Weiss picks out a single Bangladeshi woman to give testimony to the emancipating affects of sweatshop work on her life. He probably had to bribe her with a couple free meals since sweatshop wages aren’t enough to buy food.

Weiss does make an obligatory reference to “horrific industrial accidents & accusations of labor abuses” but says the picture of sweatshop labor “gets more complicated” when you account for the lack of options for women “in this poor, traditional Muslim society.” So our man makes the case for sweatshops as part of women’s liberation & gets to throw in an Islamophobic swipe as well.

More important than knowing your opponents in politics is knowing your allies because the phony ones line up to position themselves for a more bitter betrayal. Weiss quotes Sajeda Amin as an authority on how sweatshops have created greater independence for women in Bangladesh. Amin is a sociologist from Bangladesh working for the Population Council in New York & has a whole list of impressive credentials–particularly from the eugenics movement. She has a special interest in young women since she wants them all sterilized to address overpopulation & poverty. Sustainable wages are no part of her equations.

Then Weiss drags out Charles Kernaghan, the director of Global Labor & Human Rights & a frequent spokesperson on Democracy Now about sweatshops. Hopefully Kernaghan is misquoted when he reportedly said ‘It’s fantastic they have this common industry to put women to work.’ Sweatshops are just barely a step above outright slavery & Kernaghan considers them “fantastic” rather than deplorable?

We would be wise to ignore these pathetic fools & apologists for exploitation & listen to the voices of sweatshop workers in Bangladesh, Cambodia, Haiti, Nicaragua, Guatemala, & elsewhere around the world since sweatshop manufacturing is the wave of the future under neoliberalism, the barbaric phase of capitalism. They tell a different story, filled with violence. We must respond to the mythology being stitched in media newsrooms & eugenics think tanks with the truth about sweatshop workers & their increasing strikes & struggles for economic & political justice.

Weiss is also preparing a series on overpopulation, hunger, & women’s rights & is being treated as an authority. He’s no longer receiving a wage from the LA Times but there’s no need to wonder who his paymaster is now. He hit the double jackpot for media jackasses & is likely collecting checks from both the sweatshop & eugenics industries. Shame on his sorry ass!

This photo of a sweatshop in Bangladesh accompanied the article by Weiss. Please note how spiffy & clean it looks & how well-dressed the sewers. It probably cost Walmart a bundle to stage that tableau.