Thousands of Cubans standing in line to honor Castro seemed impressive till I remembered the hysterical crying when Kim Jong-il died in North Korea & when King Bhumibol died in Thailand.

There are better ways to size a person’s life up.

When right-wingers get tired of hating on Fidel Castro maybe they could direct some of that energy to Guantanamo on the other end of the island. Of course when the US waterboards & tortures people to death, it’s for a higher purpose; it’s humanitarian.

That isn’t to dismiss the accusations against Castro by comparison to US crimes. Human rights & justice don’t roll that way. But you can’t just repeat US Cold War propaganda like a ventriloquist dummy & expect your credibility to survive. That’s how loudmouths operate, not serious political people.

Cuba has some serious problems with democracy & some even more serious problems with economic survival. Some of its positions on international questions are reactionary–like a bantustate solution for Palestinians. But there isn’t a single instance of Cuba taking bombers & special forces after another country & turning it into a killing field.

Who do we contact when we come across fake news? Aren’t Google & Facebook supposed to be taking care of all that? Homeland Security is gonna have to hear about this.

You may not have to look up their contact info. Just leave a message about the fake news on your Facebook wall with a picture of the Palestinian flag.

The jeremiads about Trump’s election share one thing in common: the naive belief that US capitalism–a system of immense scope with international political, economic, & military entanglements–would leave its fortunes in the hands of one person & some hand-picked advisers. Does anyone really believe Wall Street & General Electric would invest trust in Donald Trump, Ben Carson, Mitt Romney?

The real analyses to be written are not about Trump’s election but about the possibility that Assad will defeat the popular movement against him in Syria. That is an imminent catastrophe with far-reaching consequences in the Middle East & on freedom struggles throughout the world.

No one would call me a slouch when it comes to criticism but there’s a difference in explaining, even in sharp terms, where you disagree with others on an issue & denouncing those who disagree with you as a fascist or the source of all evil in the world.

The first is a movement building approach, a belief that in the process of debate you & those you disagree with will come to better understand complicated political issues. The second is the politics of scapegoating, of hating on someone, of lashing out because you don’t want to reveal your politics or because you can’t elaborate them coherently.

The scapegoats now for the US elections are the “Dem-libs.” After 50 years in politics, I have no idea who the hell they are or why we all should hate on them. But I do know that if you want to build a movement in this country, liberals, including those who vote Democrat, are central to the process–from church to campus organizations they make up the majority of activists.

The scapegoats for right-wing social democrats who oppose Assad’s dictatorship & Russian intervention but promote US intervention are “leftists” or “antiwar leftists.” The fall of Aleppo to the Syrian regime is a tragedy of the greatest political consequence but the entire responsibility for that monstrous crime is Syrian & Russian bombing along with the sub rosa roles of the US, Iran, Hezbollah, & other forces. Trying to stick that on “leftists” is vindictive rubbish.

As an antiwar activist since Vietnam, I have struggled, as other antiwar activists have, to understand the vagaries of the antiwar movement from millions around the world to uncoordinated actions in a handful of major cities. I have repeatedly argued that the fragmentation & often sectarian character of antiwar forces has not allowed sufficient analysis of the dramatic fluxes in antiwar activity. If we do not understand why the millions of people who oppose wars are not mobilized against them we will not know how to approach effecting change in that–including the factional way left groups operate within the antiwar movement.

It’s time for the denunciation period to end. It’s time for debate to take the place of condemnations. They’re wearing thin & serve no useful purpose except to divide.

Those kids on “The Voice” have the most extraordinary singing voices. How is it possible to choose one over all the rest? There must be some way to encourage creative excellence without turning art into a horse race.

Those in the NYC area may want to attend this picket on Friday where Eva Bartlett & Vanessa Beeley will be speaking in defense of Assad’s dictatorship & Syrian & Russian carpet bombing of civilians.

They claim to be independent journalists but function solely as propagandists for the Assad regime. Their primary defense of Assad revolves around vilifying the rescue workers, ridiculing child victims of war, & smearing the continuing democratic opposition to Assad as “jihadist terrorists.”

No one opposes their right to free speech, odious as their ideas are.The purpose of the picket is to fight for the integrity of the US antiwar movement & not let it be hijacked by right-wing libertarian apologists for barbarism.

It would be fair to call me ruthless in deleting anti-Semitic comments. I detest them personally & politically. If you don’t get the problem, tough noogies. But don’t be surprised when they disappear since I’m as fast on the draw as when a women is called a bitch. Do yourself a favor & smarten up. 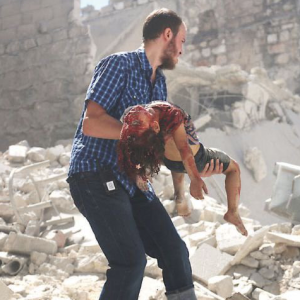 It’s hard to tell what’s going on in east Aleppo but it appears to be something of a rout by Syrian ground troops who now control several districts. It’s estimated about 10,000 civilians have fled whilst those tens of thousands who remain are without food or medical supplies & continue to sustain Syrian bombing.

Assad supporters cannot defend Syrian & Russian bombing of 250,000 civilians in east Aleppo so they avoid the issue or rail against “throat-cutting jihadists.” Now as the Syrian army advances, it is certain thousands of civilians who opposed Assad will pay the price of military defeat by the vengeful Assad dictatorship.

Apologists for the regime like Eva Bartlett & Max Blumenthal have now reduced the number of civilians in east Aleppo–Bartlett to 15,000; Blumenthal to 30,000. That will make it so much easier to explain those thousands forcibly disappeared, those dumped in Assad’s gulag, those murdered outright.

Blumenthal, Bartlett, Vanessa Beeley, & their ilk have every right to defend dictatorship & carpet bombing of civilians. The tragedy is that a faction of the antiwar movement has championed their corrupt politics & adopted them as spokespersons. Beeley & Bartlett, both ardently pro-Assad, have free entry & travel throughout Syria & access to Assad, unlike the restrictions on most journalists, including from major media. They will both be speaking on a panel this Friday in NYC along with a pro-Assad Syrian from New Jersey; Sara Flounders, an antiwar activist; & Margaret Kimberley from Black Agenda Report who claims barrel bombs are not a worse way to die than regular bombs.

We cannot allow such compromised political forces to miseducate & disorient antiwar activists. Nor can we allow those who call for US intervention & a No Fly Zone to be the only alternative. Either would be a historic catastrophe for Syrians. This gruesome photo is posted only to make clear what both those perspectives sanction in Syria.

Internationally, we must begin to gather & organize the forces of principled antiwar opposition to demand:

–the immediate cessation of Syrian & Russian bombing of civilians;

–the immediate cessation of US bombing;

–the immediate, unconditional withdrawal of all foreign military forces whether by land, sea, air, overt or covert.

(Photo of east Aleppo after Syrian & Russian bombing siege from earlier 2016, from Genocide in Syria)

Advice to the Trump transition team:

1) Close down his Twitter account;
2) Wean him off the tanning gun & bleach bottle;
3) There are already plenty of reasons to impeach him; pick one & run with it.