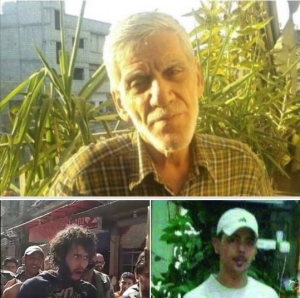 The Syria Solidarity Movement, an Assadist cult comprised of those with diminished or corrupted political capacity, issued a statement on “the liberation of Yarmouk” Palestinian refugee camp near Damascus. They congratulated the glorious Syrian army & admired the remarkable patience of the Assad regime in “allowing the Palestinian refugee population to try to reconcile its differences & take the lead in expelling ISIS & al-Qaeda” from Yarmouk.” But enough is enough & finally the regime lost patience & expelled ISIS & al-Qaeda by bombing the entire camp, including the civilian refugees, to smithereens. The Syrian Solidarity Movement says the regime handled “the delicate situation” of genocide quite skillfully, especially the looting of Palestinian homes without first checking for survivors in the rubble.

The Action Group for Palestinians of Syria, who speak for Palestinian refugees & not for the Assad regime, see things quite differently. They report that the Syrian army shot two young Palestinians in cold blood when they objected to the looting. They report that a mentally ill Palestinian man in Yarmouk accused by Syrian soldiers of being an ISIS operative was beaten, verbally abused, & disappeared. They also report that the family of an elderly Palestinian man & his wife are trying to find out the fate of their parents since they lost contact with them during the bombing. The glorious Syrian army is so busy looting it hasn’t had time to do search & rescue operations for survivors. Only White Helmets do that as part of their propaganda work. The glorious Syrian army has Bartlett & Beeley & their Islamophobic guppies in the Syrian Solidarity Movement to do the dirty work for them.

(Photos are Mohammed Zuhair Tawaklana whose family is looking for him, on top; Eissa Yehia Abu Zeid, the mentally ill man who has been disappeared, on left; & Rami Mohammed Salman who was shot in cold blood after objecting to the looting, on right)

If one did an archival search of NY Times articles on Kashmir prior to the 2016 Kashmiri uprising, one would find a dearth of any sustained analysis. There was a decades-long news blackout in most international media until Kashmiri activists (like Palestinians, Rohingyas, Uyghurs) began using social media to educate about their freedom struggle. Media had to end their blackout which allowed India to run wild in order to get ahead of the story, to control the narrative within the framework of the Islamophobic war on terror. They had to put the head-chopping jihadi Wahhabi/Salafi spin on the story even though there are probably less than 200 militants left in Kashmir since so many have been killed just this year. This is a very important article by Kashmiris Hafsa Kanjwal (who spoke at the NYC Gaza rally) & Mohamad Junaid answering a May 18th NY Times editorial titled “A Long shot in Kashmir” which attempts to make the Kashmiri freedom struggle a territorial dispute between India & Pakistan & which raises the specter of Islamist terrorism:

Palestinians wounded by Israeli snipers return to protest. Some of these young men will suffer their whole lives from these injuries. The injuries may effect the kind of work they can do & may cause permanent pain & disfigurement.

Palestinian solidarity means rallies & protests & honoring & building the economic boycott of Israel. Check every label to make sure its country of origin is not Israel.

This is the NYC Times Square rally for Palestine where Kashmiri Hafsa Kanjwal gave a brilliant speech tying the struggles of Palestinians & Kashmiris.

“Everywhere you go in Kashmir, you will find graffiti for Gaza, for Palestine, & for the Intifada. From Kashmir to Palestine, end the occupation now!”

Imagine that during a so-called ceasefire for Ramzan, Indian troops shot up Jamia Mosque & injured at least 100 people. Not content with that carnage, this creep journalist tried to whip up hysteria against “fringe mobster stone pelters.” There’s a rule of thumb in media, long evidenced in reports about Palestinians, Kashmiris, & feminists & now in reports about Syrians, Rohingyas, & most Muslims fighting tyranny: if the tone is hysteric alarm, you can be certain it is propaganda. As Kashmiri journalist Gowhar Geelani says: “This is what saboteurs, provocateurs, rabid elements, bigots, communal thugs, agitational terrorists, miscreants, paid maskharas & preachers of hate indulge in with the sole aim to spread panic & to create disharmony in Kashmir.”

Every once in a while when someone takes umbrage at what I post, they call me an old lady used in the form of an epithet. That would be right before I bounce their asses. The old lady thing is supposed to evoke all sorts of misogynist images including wrinkles, cataracts, & senility. Unfortunately for the snot-nosed punks who taunt us, old ladies are not what we’re thought of. Tolerance for snot-nosed crap diminishes by the decade so that by the time you’re 71, you’ve had it up to your eyeballs. We wear old lady with dignity & wield it like a baseball bat. So bring it on.

So many nationalist screwballs try to pick a fight on my wall, especially those from India & those who hate Muslims. So many screwballs, so little time. Take it from an older woman: you can’t change their minds. There’s so little of a mind to work with & what there is doesn’t function properly. We say a prayer for them, then kick ’em to the curb. Amen. Rot In Peace. 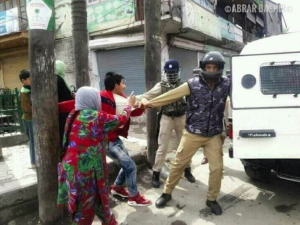 A Kashmiri mother trying to prevent her young son from getting arrested.