China is deploying special forces to Syria, joining the counter-revolution supporting Assad’s dictatorship & not for the first time. In 2013 they deployed 1,000 troops as well as warships & in 2015 they deployed 5,000 troops. China, along with Russia, also uses its veto powers in the UN Security Council to protect the interests of the Assad regime–as it does for the Burmese fascist military.

There’s a fair amount of triumphalism among Assad supporters, as if Assad & his counter-revolutionary allies have already decisively defeated the revolution. The deployment of Chinese special forces (i.e., psycho troops) may suggest the triumphalism is premature.
Syria claims there are 5,000 Uyghur militia fighters opposing the Assad regime. The Uyghur are Muslims persecuted in China. China stands united with Syria against Muslims as it stands with the Burmese generals & Suu Kyi against the Rohingya. The roots of the conflicts may not be Islam but it has certainly become of the essence.

Even though they’re all on the side of counter-revolution in Syria, you can see what’s shaping up in international politics with the US at odds with China & Russia. Not because one side is more progressive than the other but because economic competition & militarism are the nature of capitalism, especially in its barbaric phase.

Photo is residents in Atareb looking for survivors after an air raid. This bombing of civilians is what Assad supporters call fighting terrorism. 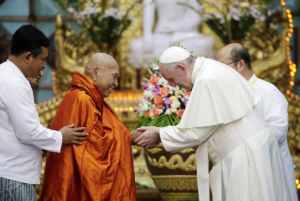 They’re giving Pope Francis the same alibi they used so long for Suu Kyi. Since 2012 when she went to pick up her Nobel, she couldn’t speak out against the Rohingya genocide because it would undermine the transition to democracy which she was leading. Gullibility is not a political virtue. They should have known her silence was of the deafening kind. Now the pope’s silence is being justified by claiming he didn’t speak out against the Rohingya genocide to protect Catholics in Burma from persecution. We haven’t all drawn the conclusion from history that the best way to avoid persecution is to lay low when another group is being exterminated. We’ve learned that solidarity is the only way to protect us all. Perhaps one of the many principled Catholic laity should send Pope Francis that famous statement by Martin Niemöller, a Protestant minister & one of the first Germans to speak out against the holocaust (& who spend several years in a concentration camp as a result):

Part of running interference for the pope is parsing his sermons for discreet signs of opposition to genocide. In one sermon he called for forgiveness & against taking revenge, saying “revenge is the not the way of Jesus.” Who is he addressing when he speaks of forgiveness & revenge in Burma? Revenge sure as hell isn’t the way of Jesus but neither is compromise with genocide–nor forgiveness without justice. He wasn’t known to speak in euphemisms either but took a horse whip after shysters hanging out in the temple.

Here the pope warmly greets Bhaddanta Kumarabhivasma, head of the supreme council of Buddhist monks, at a meeting with monks in Yangon. Since Buddhist monks play such a central role in the genocide, it would have been so important for the pope to lay them out. But he didn’t.

The pope bombed. Silence is collusion, not discretion. He disgraced himself & brought shame on the Catholic Church. Enough with the combing through evasions & ambiguities in Suu Kyi & the pope’s words to find a shred of human decency. It ain’t there.

A 48-year-old Palestinian farmer was fatally shot today by illegal Israeli squatters near South Nablus in the West Bank. He leaves a wife & children. He was shot & killed while farming his land — then his body was confiscated by the occupation. His name was Mahmoud Za’al Odeh & his death marks 336 Palestinians killed by the occupation since October 2015.

We can support Palestinians in their fight against occupation, apartheid, colonialism by honoring the economic & cultural boycott of Israel. Buy nothing with barcode beginning 729. 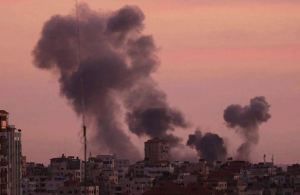 Israel is bombing Gaza again today in its ongoing determination to exterminate Palestinians. Shall we parse the distinction between ethnic cleansing & genocide here? Gaza is on the point of complete ruin as a result of years of Israeli bombing with Palestinians not even allowed to leave for life-saving medical care. Gaza isn’t just a hellhole & an open air prison but a death trap because of the Israeli embargo & bombing.

Rather than stand helpless, we can support Palestinians by honoring & promoting the economic & cultural boycott of Israel. Buy nothing with barcode beginning 729 & check every label. 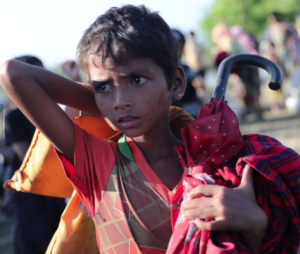 Just so there’s so misunderstanding about where the Vatican stands on the Rohingya genocide, Burmese Catholic Bishop John Hsane Hgyi & Fr. Mariano Soe Naing, spokesman for the Catholic Bishops’ Conference of Burma spoke at a news conference yesterday alongside Vatican spokesperson Greg Burke. It’s worth noting that Burke, who was appointed the pope’s spokesperson last year, is a former Fox News journalist & member of Opus Dei.

The purpose of the press conference was to lay out the Burmese Catholic Church’s view of the Rohingya genocide. The presence of the Vatican spokesperson can only mean Pope Francis is in agreement with the Burmese church. Bishop John Hsane Hgyi defended the Burmese government (a fasicst military junta) & suggested that reports about atrocities committed against the Rohingya–who he did not refer to by their proper name–were fake news. Burke piped up that the Rohingya genocide was not the purpose for the papal visit but was part of establishing formal diplomatic relations between the Vatican & Burma. What kind of spiritual leadership doesn’t just ignore genocide but denies it despite mountains of documentation? Burke denied that the pope has lost moral authority for his sniveling behavior in Burma. In fact, it is likely that his moral authority has grown considerably among fascists & the kind of people who consider Fox News legitimate.

Pope Francis really should have stayed at home because he has shown himself to be something of a monster. He traveled on to Bangladesh today sputtering praise for Bangladesh for humanitarian assistance to the ” massive influx of refugees from Rakhine State”–again refusing to call the Rohingya by their proper name or denounce genocide.

Everybody wants to believe the pope’s humble-pie schtick. We want to believe he’ll clean up the Vatican covering for pedophile priests; that he’ll loosen up the misogynist policies against women’s reproductive rights, that he’ll stand with human rights even though that hasn’t been the track record of the Vatican. Does Pope Francis want the Catholic Church to become the spiritual wing of Fox News & fascism? Most Catholics do not & they do not deserve that kind of compromised leadership.

Photo is Rohingya child who Pope Francis refuses to acknowledge except in evasions.

It’s hard to understand the angst many men are expressing about the tsunami of men charged with sexual assault. If you don’t engage in such aggression against women or children, why the nervous twitching in sympathy with perverts? The litany of political objections the twitchers (& sometimes perpetrators) use to impugn women accusers are all about false accusations, due process–that day in court thing. Very compelling. But not so much when you know that sexual assault laws are so weak in most countries & so stacked against women that out of the 60 women who accused Bill Cosby, only one met the legal standards for prosecution. When I sued a corporation for sexual harassment in the 1980s, there were no laws in place to protect women. There still aren’t. Sexual assault still doesn’t meet the standards of criminality.

Let me suggest that the twitchers not resort to mansplaining sexual assault when their day in court stuff falls on deaf ears. Stop when you’re ahead & maybe even try listening to women, many of whom were children when they were assaulted. Do keep in mind that a large number of those assaulted are little kids, including boys.

Mansplaining sexual assault leads you down a road you don’t want to go if you want to keep your dignity & not face the ‘slings & arrows’ of contempt. It’s led men to making statements that make them look more like whipped puppies or psycho-perverts than ‘manly men’ they claim to be. For heaven’s sake, hold on to your dignity. It’s all you’ll have when women get a load of how pathetic you are. How hot do you think you’ll look when you say “I wonder if all these angry, vengeful women are going to turn more men gay”? Or if you say “Because I grew up with the explosion of feminism, I have always been made to feel ashamed of being male”? Or if you say “All this anger from women is not going to help anything. It will only further divide the sexes & make sexual violence more probable”? Or if in desperation you go all evo-psycho & claim men are hardwired to rape? Or if you claim that Weinstein & the other accused are being scapegoated for not deferring to women all the time?

The last word of advice is don’t play stupid. You don’t have to be female or feminist to understand what kind of behavior toward women & children is “inappropriate”, degrading, & violent. You only have to be a decent human being & you can demonstrate that by standing with women against sexual harassment & assault rather than twitching in sympathy with criminal perverts.

So media thinks the worst of Trump tweeting hateful, deceitful Islamophobic videos is that it caused tension with Theresa May of the UK, not that it threatens Muslims with assaults. His press secretary Sarah Sanders (daughter of Mike Huckabee, so she never had a chance to develop intellectually or as a human being) says even if the videos are fake, the threat of Muslims is real. Before such malignancy, one can only march under the banner “Take ’em down.”

In the town of Brownsville, Texas, about an hour from here on the border with Mexico, there is an ugly monument to Jefferson Davis, the president of the Confederacy. It was vandalized a few months ago with anti-KKK & anti-Trump graffiti. Tonight the city council will hold a town meeting to determine the fate of the damn thing. Local news interviewed a city council member who wants it removed because ‘it’s like Germans putting up monuments to the Third Reich’. Other than the fact that the monuments are great big fat historic lies, that’s one of the best arguments I’ve ever heard in favor of taking those ugly-assed monuments down.

Dumb-as-a-Stump Trump retweeted three videos from a British white supremacist, Islamophobe, & xenophobe which were all reportedly exposed long ago as fake news. One is an “Islamist mob” pushing a boy off a roof & beating him to death; another is a Muslim destroying a statue of the Blessed Virgin Mary; & the third is a “Muslim migrant” beating up a Dutch boy on crutches.

Forget Russia. Doesn’t this, along with the thirteen women who’ve accused him of sexual assault, constitute grounds for impeaching his ugly ass sky high?

Premature triumphalism among Assad supporters about the strength of counter-revolution in Syria has emboldened many to more openly express their political affinities with fascism. Several are more openly hateful toward Jews, Muslims, women, & about their denial of the Bosniak (Bosnian Muslims) & Rohingya genocides. It’s too late for many to retreat from this unsavory alliance with fascist forces worldwide. But politics are complicated so everyone has a right to be occasionally confused & taken in by skillful propagandists. But when Assadists have exposed who they are politically & their alliance with fascist forces around the world, it’s time for men & women of good will to jump ship & return to the side of the oppressed.