We can hardly wait to see how Assad supporters will do their regime-change narrative in Iran to coincide with the regime’s foreign agent portrayal of hundreds of thousands of protesters across Iran. It’s only farce if we reject it with the contempt it deserves. Because of Iran’s military involvement with Assad & the Syrian counter-revolution, Assad propagandists will swing into action just as soon as they get the line from headquarters in Damascus. Beeley & Bartlett will be heading off to Tehran by invitation of supreme leader Ayatollah Khamenei & president Hassan Rouhani. How they’re gonna spin that theocracy to jibe with their crap about the secular Assad regime is gonna be a conceptual pretzel but believe me, they will try. 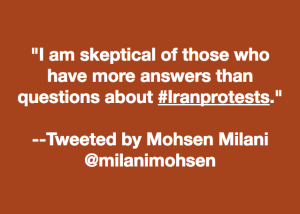 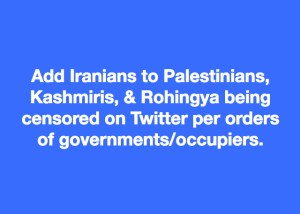 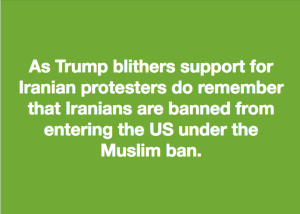 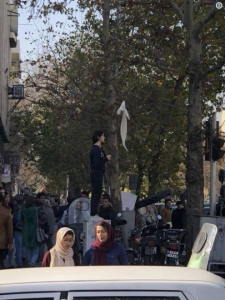 For four days, thousands of anti-government protestors have taken to the streets in at least 25 different cities in Iran. Protesters confronting riot police with water cannons, tear gas, truncheons, & gunfire are chanting “death to Khamenei” & tearing down pictures of supreme leader Ayatollah Khamenei & president Hassan Rouhani. Hundreds have been arrested & two protesters have been killed.

It’s not clear from media reports if the protests are spontaneous eruptions of anger or organized by beleaguered political groups. According to one Iranian commentator on social media, young workers most affected by exorbitant prices, unemployment & economic inequality are the majority of protesters. Women are also a large component of the protesters, including many who removed their headscarves to protest the theocracy’s dress code. Many are reportedly protesting Iran’s foreign policies but it’s hard to tell the character of the political demands. Some reports make the demands sound xenophobic but there are likely to be a majority who oppose Iran’s role in supporting the Assad regime if for no other reason than the impact of war on the Iranian economy.

The photo is a young woman taking off her mandatory headscarf at a protest in Revolution Square in Tehran.

Reading through my posts today, there are new year greetings mixed with reports about violence in Palestine, Kashmir, Syria, & elsewhere. We know millions of refugees are crammed into squalid camps in almost concentration camp conditions or forced to live & sleep outside. They’re all our sisters & brothers & what happens to them is our concern. 2017 was a lousy year for them, just like the ones before it. We don’t have the right to turn away because the suffering is overwhelming. We just keep stepping to build solidarity because the future of all humanity rests on the victory of the oppressed & our support for their struggles. The new year just means a recommitment to active solidarity.

Once upon a time, I had a Facebook friend who was progressive on everything except her own country of Thailand. She had one of those nationalist blind spots. She loved the king (the one who croaked), loved the military junta & supported them when they refused to let Rohingya refugees land in May 2015. Thousands who drowned are still unaccounted for. Our friendship was not one made in heaven.

Recently, she again began following & commenting on my posts. Since I am an admirer of the writings of Thai dissident in exile Giles Ji Ungpakorn & even posted his brilliant & merciless obituary for that king, I knew it would be a matter of time before she stormed off in a huff. She’s not a bad egg but nationalism has a peculiar hold on people’s minds. Believe me, I know that from growing up in the McCarthy era. In life you have to decide whether you stand with the oppressed or the oppressors & you make no exceptions to that commitment.

Israel just launched a $75 million program, partially funded by the government & partially by international Zionist groups, to fight the Boycott, Divestment & Sanctions movement which has proven so effective in educating about Israeli apartheid & ethnic cleansing. We can expect more attacks on free speech & civil liberties, especially on campuses, in an attempt to destroy Palestinian solidarity. Buckle up for the bumpy ride ahead. The fight for Palestinian justice is now yoked to the struggle for civil liberties in our own countries. 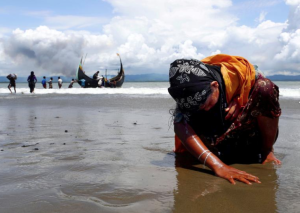 No concessions can be made to the Burmese & Bangladeshi governments’ proposal to forcibly repatriate Rohingya refugees. It is solely up to the Rohingya people to decide their fate–not the genocidaires & their accomplices.

Now there is a proposal floating for the establishment of safe zones in Arakan state administered by multinational security forces to protect Rohingya refugees forced against their wills to return. That would be a UN occupation like in the DR Congo & Haiti where cholera epidemics, rape, & child sex trafficking accompanied the troops. That is not a solution. There can be no safe zones for the Rohingya in Burma as long as the fascist Burmese junta is in power, armed to the teeth by China & Russia, & protected by the mythology of a civilian government trying to forge democracy. We need to pressure our governments to impose harsh economic & military sanctions on the Burmese regime & we need to boycott all Burmese products. That is a campaign whose time is long overdue.

We cannot be accomplices to forcibly sending refugees back to the killing fields of Arakan state so that the Burmese government can finish the genocide it is committed to. Our mission is to support Rohingya demands for safe asylum in countries around the world, visas & work papers, humanitarian aid, schools, & medical care.

This photo is an exhausted Rohingya woman reaching asylum in Bangladesh on September 11th. Who would presume authority to send her back against her will?