You might be a redneck socialist, or just a redneck, if you’re heavy into that debate about Kautsky vs. Lenin but support Assad & aren’t concerned even a bit about those concentration camps forming on the US southern border.

My sharp tongue can get the best of me sometimes. Like everybody else, I’m distraught about these concentration camps & haven’t got it in me right now to be pedagogical when racists leave their droppings on my wall evincing not an iota of human feelings for little kids. If I offend your sense of how to handle things, I’d apologize but my approach to idiocy is more ‘tough love’, if you know what I mean. 😉

An anti-refugee racist claimed on my post that the photo of the refugee child with the poopy diaper was staged. Reading too much fascists Eva Bartlett & Vanessa Beeley, is she, where Syrian children being bombed feign trauma & play dead on command from the White Helmets?

On Twitter, several are making fun of a video showing Ivanka Trump butting in to a conversation with & getting the cold shoulder from Christine Lagarde, Theresa May, Justin Trudeau, & Emmanuel Macron–referred to as “actual world leaders.” No question Trump’s girl Ivanka is an amoral halfwit but how any one could hold the other four in higher esteem than they hold a cockroach is a marvel of political idiocy. 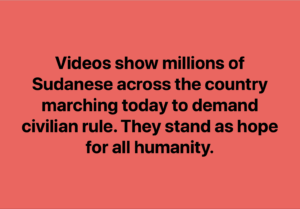 Most US media has an editorial policy of using the word ‘migrant’, defined as ‘a person who moves from one place to another in order to find work or better living conditions.’ The correct term, which media refuses to use, is ‘refugee’, defined as a person forced to leave their country in order to escape war, persecution, or natural disaster.’ To which we may add forced also to leave because of sweatshop economics & neoliberal economic plunder.
Most of us just prefer to see them as fellow human beings, working people, brothers & sisters. No human being is alien to us & we have no intention of letting war, occupation, plunder, genocide chase them or us from our homelands.

Trump’s barbaric policies toward refugees are US policy. But this political cartoon captures the amorality of the US concentration camp guard-in-chief. Just two days ago, Trump’s top immigration official Ken Cuccinelli actually blamed Salvadoran father Óscar Alberto Martínez Ramírez for his own drowning & that of his 23-month-old daughter Valeria. Cuccinelli told an interviewer that Martinez drowned because “that father didn’t want to wait to go through the asylum process in the legal fashion, so decided to cross the river.” In fact, even if Óscar Ramirez had waited outside in sweltering temperatures in lines that go on for nearly a mile, it is most likely his application for asylum would have been denied.

Michael de Adder who did this political cartoon highlighting the amorality of Trump’s immigration & refugee policies was fired for it by his employer the Brunswick News in New Brunswick, Canada & they refused to publish it. It has since gone viral.

Open the borders. Immigration & asylum for refugees is a human right.

Acting Homeland Security Secretary Kevin McAleenan told a US Senate hearing that 60,000 child refugees–both unaccompanied & kidnapped from their families–were arrested at the US-Mexico border & stuffed into concentration camps just between April 25th & June 11th. There were already thousands being held & thousands arrested since.

Trump’s officials, including from immigration agencies, the Justice Department, Homeland Security, Health & Human Services are all defending these camps & promoting his racist, xenophobic, & pathologically nationalist ‘zero-tolerance’ policy. We should not for one moment forget that Trump’s policies are US policy. He remains in office despite overwhelming evidence that he is deranged & stupid because he so well serves the extreme right-wing section of the capitalist class which now dominates US politics.

These are refugees at one of the now notorious El Paso, Texas concentration camps. 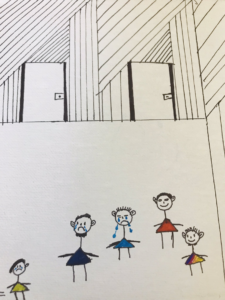 Such is the state of US politics, that overwhelming response to images from the children’s concentration camps is either send money for humanitarian assistance or vote Trump out of office. There can surely be no objection to either. But the strongest reaction to end these concentration camps is to organize national protests, including at the border, demanding they close down these torture camps & open the damn borders.

This is a drawing by a child released from the McAllen, Texas concentration camp for children. The children call the camp ‘La Perrera’ meaning ‘the kennel’ in English.

During the Democratic presidential debate last week, several of them denounced Trump’s concentration camps for refugees (although they did not refer to them as such) & afterwards flocked to the camps to make a grandstanding electoral gesture. Has any one of these US congresspersons taken any legislative action whatsoever, or even made a whimper of protest on the floor of the House or Senate, against Trump’s egregious violations of human rights for refugees & child welfare?