Just to be clear: when Hillary Clinton heralds the 1.7 million Hong Kong protesters, she isn’t doing it because she feels any political affinity with the protesters. She isn’t doing it to impugn socialism of the Chinese Stalinist kind: sweatshops, child labor, Uyghur genocide,Tibet occupation, arming Rohingya genocide, neoliberal plunder of Africa, political repression, gulag, environmentally reckless, working people living in dog kennels. She managed that kind of oppression as US Secretary of State, most egregiously in turning Haiti into a sweatshop nation, in supporting dictatorships all over the world, & promoting the several US wars. The reason she’s doing it is to mock & get her knocks in against the very notion & possibility of human society free of exploitation, inequality, racism, war.

In the 1980s, I took a quite valuable course on interpreting media at the University of Massachusetts. During one segment, we were addressed by the NY Times reporter who covered the 1968 uprising in Czechoslovakia against Soviet rule. Media in the USSR was reporting it as an uprising against socialism to justify the occupation by Soviet troops. So was the NY Times, but to make it appear that socialism was an oppressive system. Several other media sources around the world, including Le Monde, were publishing manifestos, documents, reports from the Czech protesters themselves proving they were not trying to overthrow socialism but to democratize it, to get rid of Soviet domination, the gulag, & bureaucratic rule. The evidence for that was massive & irrefutable. The reporter agreed with me when I presented those manifestos. But when I asked him why the NY Times coverage corresponded with USSR coverage & didn’t report about democratization, he went all weepy that I had cornered him unfairly. Maybe he didn’t control what the NY Times published from what he reported. But, as a retired journalist, he could have just stated that rather than whimper like a whipped puppy when questioned about the contrast in reporting.

The point is that when media favorably reports such protests as Hong Kong or in Venezuela, their political agenda is entirely different from those of us who want to build societies suitable for human beings to live & love in. Such societies would necessarily exclude the Stalinist barbarisms of the Soviet & Chinese kind. 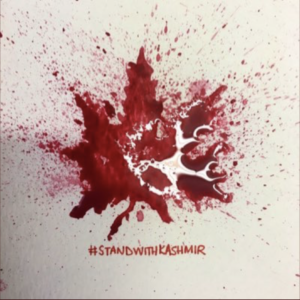 South African artist Shubnum Khan drew & posted this image as an act of solidarity with Kashmiris just after India’s siege began. She reported today that Twitter notified her of a complaint from India that the image “violates the laws of India.” Indian ‘democracy’ is beginning to look more & more like a circus sideshow.

There was a #StandWithKashmir rally in Auckland, New Zealand on August 10th, 2019. 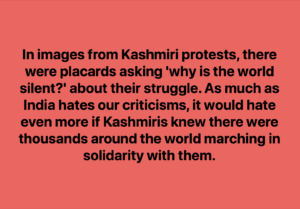 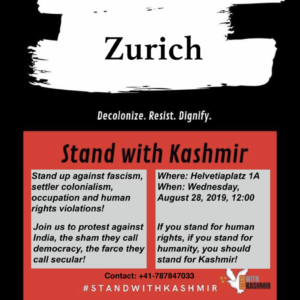 A brilliant presentation of the history of the Kashmiri struggle by Kashmiri activists living in India:

When I came of age politically in the period of the Vietnam War, the antiwar movement was international, with millions protesting that war on every continent. As they did the Iraq War nearly 30 years later. Now the Stalinist & Assadist cult that’s destroyed & replaced the antiwar movement claims they cannot speak out against Russian bombing in Syria because only “US regime-change operations” are their concern. That might explain their complete silence on India’s siege of Kashmir & the Burmese genocide of Rohingya. But it doesn’t explain why they’re so voluble in denouncing the Hong Kong protesters in China unless they’re making the deranged claim that 1.7 million protesters are a “US regime-change operation” against China. But indeed, they are making that claim. Marx once said that history repeats itself, first as tragedy, then as farce. With Stalinism & Assadism, you can’t distinguish which is which.

Trump offered to mediate the “explosive” situation in Kashmir by talking to Modi this weekend. A rabid white supremacist & commander-in-chief of seven US wars ‘mediating’ with a rabid Hindu nationalist & fascist? What could be the possible outcome except more suffering for the Kashmiri people? Showing his political grasp of the situation, Trump said, “Kashmir is a very complicated place. You have Hindus & you have the Muslims & I wouldn’t say they get along so great.” His intellectual insipidity is only matched by the depth of his malice & his groveling before power.

There are three-million Syrians, including 1.5 million children, living in Idlib today. Hundreds have been killed, thousands wounded, & at least 500,000 forcibly displaced by Syrian & Russian bombers & ground troops. The borders to Turkey & Jordan have been sealed to prevent refugees from entering & they are being forcibly returned to Syria by the Turkish & Lebanese governments.

Stinking rotten Assadist & former UN arms inspector Scott Ritter tweeted: “Political guilt refers to the responsibility of ordinary citizens for the actions of the government that they had supported or tolerated. There can be no doubt if you live in Idlib today, it is because you support or tolerate al-Qaeda.”

What an absolutely putrid lack of understanding & solidarity with those being bombed to smithereens by Syrian & Russian bombers. Ritter understands nothing about war, occupation, genocide. God help his rotten soul.

A synopsis of international media’s misgivings (hardly condemnations) about the siege of Kashmir: