This testimony to the UN by Susannah Sirkin from Physicians for Human Rights about the bombing campaigns against civilians in Syria blows all of Assad’s propagandists & apologists out of the water. The glaring distinctions between propaganda & forensic investigation of what is actually going on are laid bare in her powerful exposé & emotional condemnation.

Please take the time to listen & then compare her testimony to the shabby lies of Assad propagandist Vanessa Beeley in this video: https://www.youtube.com/watchtime_continue=242&v=_LTR2SUvt3c. It is of note that Beeley attributes her inspiration to her father Harold Beeley, a British diplomat directly involved in the partition of Palestine.

This is a heartbreaking account by Bilal Ahmad that gives insight into the emotional devastation caused by the forcible disappearance of loved ones. Kashmiris have lost between 8,000 & 10,000 of their young to forcible disappearances by occupying forces & Kashmiri human rights activists like Khurram Parvez play a leading role in the international fight against its use by nearly 50 countries.

No one in the political arena is above criticism. That’s the character of debate when understanding complex social & political problems is involved. Nevertheless, it’s hard to criticize someone like Ali Abunimah when he plays such a central role in Palestinian solidarity. His political judgements however, outside of Palestine & Israel, are often quite conservative. On the issue of the Assad dictatorship & the Syrian Arab Spring, including the role of Palestinian refugees, his politics are hopelessly mired in Assadism.

Not to insult his intelligence, but it seemed he was too influenced by such people as Ben Norton & Max Blumenthal. In fact, his father Hasan Abu Nimah lost his home in the West Bank after the 1967 War, became a Palestinian resident of Jordan, & served as a
career diplomat for the Jordanian monarchy for many years until his retirement. He has written several articles about Syria, all of which take a strong Assadist position. It’s likely that as a diplomat he had exchanges with the Assad dynasty & may even know them on a personal basis. What’s unfortunate is that neither Abunimah has grasped the problems faced by Palestinian refugees in Syria who sided with the Syrian Arab Spring. Many have been disappeared, arrested, tortured, & murdered in Assad’s gulag. Thousands have been displaced by regime & Russian bombing. Jordan long ago sealed off its borders to them as Turkey later did. The issue involved in their political blindness most likely has to do with class since Palestinian refugees in Syria could not go from being refugees into a diplomatic post.

Tulsi Gabbard did herself in with hard-core Assad propagandists several months ago when she characterized Assad as a ‘brutal dictator’ who used chemical weapons against Syrian civilians. Bartlett & Beeley & their disciples treat Assad like a demigod, not least of all because he signs their paychecks. Now Gabbard has blown it with the Medea Benjamin/Code Pink & Ali Abunimah type of Assadists by voting for H. Res. 246, the US House resolution which denounces BDS & swears fealty to Israel.

Not even a month ago, Abunimah was tweeting favorable comments about Gabbard like “I’m open minded about Tulsi Gabbard & skeptical about a lot of what’s being said about her. Some criticisms are fair & some are smears.” Days later he tweeted, “Tulsi Gabbard: end the wars & give everyone free, quality healthcare. What’s not to like?” Since Gabbard has been a Hindutva nationalist, General Sisi supporter, Zionist, & anti-Semite for a long time, there’s a lot not to like & it’s hard to understand what took Abunimah so long to catch on though it’s good he finally has. Now maybe we can catch him up to speed about Assad.

This photo of Gabbard with leading Zionists Miriam Adelson & Rabbi Shmuley from May 2019 was posted on Twitter & published in Haaretz & other media venues. What’s not to get about her politics on Palestinians?

“This Is My 21th Account I Created Today On 28/7/19. Dear Authorities Please Stop Censoring Me.”

Rand Paul, a Republican dirt ball much publicly admired & honored by Assadist Vanessa Beeley, has offered to buy a ticket for Ilhan Omar to return to Somalia so she will be grateful to now be an American. We leave it to American Assadists who look to Beeley as an authority on Syria & the White Helmets to worm their way out of that dilemma. They weren’t careful in their judgements so they are judged by the fascist company they keep. 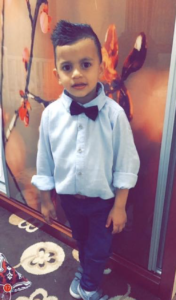 The ruthless little stone pelter, three-year-old Palestinian Mohammad Rabee Alayan, who has one of the most high-tech, fully-loaded armies in the world up in arms. He could be sentenced to 20 years in an Israeli military prison for lobbing rocks at police & army jeeps. Israel should be facing Nuremberg charges for traumatizing a little guy like this. 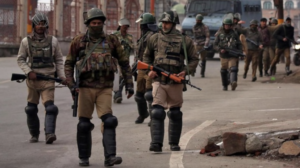 India has about 800,000 troops deployed to Jammu & Kashmir making it the most militarized region in the world with a ratio of nearly one soldier to every 15 residents. It’s hard to imagine the psychological magnitude of such an overwhelming fully-armed & hostile presence. At the request of the J&K state government, India is now deploying & airlifting in another 10,000 paramilitary forces on top of 10,000 additional forces deployed last February & 40,000 recently deployed for the Hindu pilgrimage to Amarnath. It would be safe to call this a massive provocation & a threat to public safety.

We should be afraid for Kashmiris & outraged that they, for the most part, stand alone on the front lines of oppression without international support. It should be our commitment to, at the least, educate others about their struggle against occupation & colonialism &, at the most, begin to build an active solidarity movement to support their struggle for political power.

(Photo of Indian troops from Reuters) 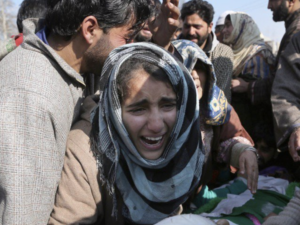 This very powerful image is from December 15, 2018 when Indian occupying forces opened fire at unarmed Kashmiris (in the Pulwama district about 45 km south of Srinagar) marching toward the site where three militants had been killed in a hunt to kill operation. Eleven Kashmiri civilians died & over 200 were injured. Medical personnel treating the victims said all of the injuries were to the head, abdomen, & neck, proving the occupying army intended to kill the civilian protesters.

Nationalism is so corrupting & hateful that in response to this photo, a Hindutva creep posted a cartoon depiction of independence leader Syed Ali Geelani manhandling a small child, with the inscription: “The dangerous teacher in Kashmir: terrorism plus stone pelting equals azadi.” Hindutva nationalism, Zionism, Assadism are on a continuum of political amorality that dehumanizes the oppressed. It’s a fatal amorality if not silenced by political power, as the US Civil Rights Movement demonstrated so powerfully.

This photo is a Kashmiri woman grieving over a civilian during his funeral prayers at Prichoo village in the Pulwama district.

Mehbooba Mufti & Omar Abdullah are going at each other on Twitter. As chief minister of Jammu & Kashmir, Abdullah introduced pellet munitions & in her tenure as chief minister, Mufti endorsed their use against unarmed protesters. Hopefully they’ll clobber the hell out of each other since Kashmiris are done with them. May they rot in hell.