That ain’t the half of what they do to unaccompanied kids crossing the US-Mexico border from Mexico & Central America who end up in detention centers.

Last Saturday, hours after Trump signed the Muslim ban, a mosque in Victoria, Texas (about 3.5 hours drive from here) burned to the ground. Fire forensics have not been concluded so they don’t know if was arson & a hate crime. But a GoFundMe page was set up & already over $975,000 has been raised to rebuild.

Of course if those donors haven’t denounced all of the crimes of the past 100 years in US politics & marched against every injustice, then they were indeed presumptuous for showing such generosity of spirit & someone ought to denounce them.

If you would like to brave damnation, here is the GoFundMe page:

Could a Rohingya friend explain why–actually if–we should mourn Ko Ni? I certainly do not agree with his assassination but he was a legal adviser to Aung San Suu Kyi & her party & remained a loyal supporter of Suu Kyi throughout this monstrous offensive against Rohingya.

He was a Muslim &, while not Rohingya, still persecuted as a Muslim in Myanmar. Or did his class status exempt him from that? There are no reports he objected to the genocide of Rohingya Muslims.

So I’m sorry he was shot down in the street & think whoever did it should be prosecuted, but I don’t want to waste my tears on a guy who stood silent about genocide.

Partly what’s motivating this reactionary nonsense is cynicism & misanthropy: nothing people do is ever good enough. Even when they’re making history in the most massive protests in human history for women’s & refugee rights.

The lion’s share of what’s behind the sneering at protesters is reluctant support for Trump. Some are uncomfortably discovering that their politics are going south & they’re morphing into right-wingers. Must be alarming to see yourself move right but don’t lash out at those who stay the course for justice.

We take our cues from fighters, from Palestinians, Kashmiris, Syrian revolutionists, anti-caste fighters. Not from Global Research. Stop reading the stuff that rots the brain & demoralizes the human spirit. Get your ass off the sofa & join the protesters making history. You’ll come to see in action that human beings are a marvelous species & you may get over the misanthropy. If your politics are based on hating & sneering, you’re moving in the wrong direction.

Pope Francis is a case study in the politics of ambiguity. He’s a master of proffering the empty gesture to the oppressed & solidarity to the power elite. Since he became pope in 2013, he has often expressed concern about the conflict in Syria, called for ceasefires & held prayer vigils. Diplomatic messages between him & Assad began then & continue till today. But Pope Francis speaks in passionate abstractions, takes no sides, makes no condemnations.

Not even the pope can play both sides of the street in a revolution against ruthless dictatorship. Especially the pope, who provides spiritual leadership to 1.3 billion Catholics, cannot equivocate. Catholic theology does not sanction mass murder nor teach that Assad will go to heaven if he makes an act of contrition before he dies. In accordance with church teachings, the pope ought to speak in an unequivocal voice & denounce Assad.

But perhaps Pope Francis isn’t so equivocal after all. In October 2016, he named archbishop Mario Zenari, the papal envoy to Syria, as a new cardinal, the highest office in the church which makes him eligible to be pope. Zenari would remain papal envoy.

Cardinal Zenari also speaks in hand-wringing abstractions about bombing & chemical attacks on civilians. One can’t tell from his statements who he is giving the naughty finger to since they can hardly be called denunciations. Would he be deported for speaking frankly? So what? Nearly half a million people have lost their lives & nearly 8 million are refugees. Zenari would merely take a plane back home. Or is it possible his political sympathies are with the Assad regime?

SANA, Syrian state media, reported January 21st that Zenari visited Aleppo to participate “in the atmosphere of joy after defeating terrorism in Aleppo.” He told a group of military, religious, & regime officials he “affirmed that Syria will achieve triumph over terrorism” & that Pope Francis considers cooperation with the Assad regime necessary. That is no longer equivocation; it is endorsement of the Assad regime & accords with other photos of Zenari meeting with Assad to deliver diplomatic messages from the pope where the two are clearly affably engaged.

On the same day SANA posted its report, Syrian journalist Kinana Allouche posted this photo on FB of herself with Cardinal Zenari. Here’s the problem with that association: in April 2016, Allouche, a reporter for pro-Assad Syrian TV, posted selfies of herself radiantly smiling with Syrian soldiers in front of the bodies of rebel soldiers. There was so much outrage on social media that Allouche was forced to take the photos down. Again, in July 2016, a video circulated seeming to show Alllouche laughing over the bodies of children killed in Aleppo while men, presumably the fathers or rescuers, are shouting at her in anger.

As we know from the conduct of US soldiers since the Vietnam War, desecrating the corpses of “enemy combatants” is a war crime & that includes posing for photos with them. Do Cardinal Zenari & Pope Francis really want to be associated with that kind of politics? Because if they do, it blows their ambiguities to hell.

KKK guy David Duke endorses Tulsi Gabbard for her trip to Syria & endorsement of Assad. Of course Beeley & Bartlett, Assad’s posse of paid propagandists & their followers also enthusiastically do. Global Research, the very font of crazy-assed libertarianism is jubilant. They all expect to launch the apocalyptic battles against the Illuminati from Syria after Muslims are driven out.

Is there a difference between a cesspool & the Hands Off Syria Coalition?

Reports are circulating that Assad is bedridden or may have died. How will they know for sure when he’s croaked? Poke him with a cattle prod?

Apparently this isn’t the first time some have let their wishful thinking get away with them. He’s been rumored dead before. Whether he’s alive or dead only matters if it will weaken his regime & strengthen the revolution against him.

One thing we do know: nearly half-a-million Syrians have died & several millions are refugees. Whenever he croaks the requiems will be a hallelujah chorus.

Assad expressed great umbrage to Syrian-state media that Russian insiders blabbed about his exhaustion from six years of carpet bombing civilians. On the contrary. That twitch in his left eye has nothing to do with with shot nerves. His capacity for barbarity & mass murder of revolutionists is undiminished.

Vanessa Beeley confirms this in an article chastising those who demonize Assad. She believes Assad is the reincarnation of Hugo Chavez dressed in Armani & that he’s trained the Syrian Army in the ethos of Gandhi. She prefers to demonize baby Omran who makes bombing civilians a problematic for propagandists to explain. Assad however laughed at the suggestion that bombing children troubled him. He is a dictator after all.

The denunciations & hating on liberals seems inexhaustible. But mostly irrational. Perhaps those who make such vituperations the essence of their politics could tell us how many times they marched against Obama’s wars? If ever. 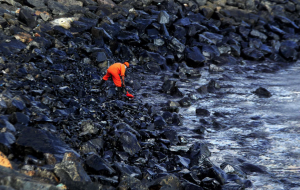 Two oil tankers collided early Saturday morning outside Kamarajar Port (formerly named Ennore Port) near Chennai, India. Port officials called it a minor accident, announced there was no damage to the environment, & said the movement of ships was not affected.

Coast Guard officials in Chennai said they were assessing the situation but “Kamarajar Port has the wherewithal to arrest the spill, which is a minor one” with a containment boom (a floating barrier used to contain oil spills).

It’s a red alert that Kamarajar Port is the first privatized port in India under the Modi government’s neoliberal economic policies to move port management of all Indian ports from state-owned to a corporate, landlord model.

This photo of a pollution response officer collecting samples of the oil spill near Kamarajar Port documents that this was not a minor spill. And likely not the last.