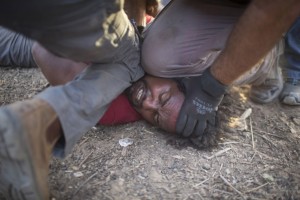 Zionism had a different kind of dream than Martin Luther King. In opposing US apartheid (called Jim Crow), Dr. King said “We hold these truths to be self evident: that all men are created equal” & “With this faith we will be able to hew out of the mountain of despair a stone of hope.” It was that kind of vision that inspired the great US Civil Rights Movement, which while it lasted ended the worst savageries of US apartheid & inspired millions of oppressed around the world to stand against tyranny & colonialism.

Zionism isn’t built on equality & all that hope stuff; it’s built on a cynical & twisted sense of Jewish superiority, separating Jews from other ethnicities in a shtetl surrounded by an apartheid wall & fortified by one of the most heavily armed militaries in the world. From earliest on, those who opposed the Zionist project of Israel claimed it would be a death trap for Jews. It has proven worse than that.

Right now Israel is engaged in a murderous bombing campaign over Gaza & a jackboot occupation of the West Bank, brutalizing & rounding up hundreds of Palestinians. Politicians are inciting Israelis to barbarous acts of violence against Palestinian youth as revenge for the murder of the three teenage settlers–when no investigation, charges, legal proceedings have even been initiated. In other words, mob rule is in force in place of legal justice.

And in this photo, an Israeli cop & immigration officer brutalize an African asylum seeker who along with 1,000 others left Holot immigration jail in Israel & marched to the Egyptian border to get the hell out of the country. They preferred to return to their own war-torn countries or to make the perilous trek across the Mediterranean Sea than to stay in the hellhole called Israel. It doesn’t get more damning or more wretched than that.

Supporting Palestinian justice & opposing Israeli apartheid is the only vision that ‘will be able to hew hope out of the mountain of despair’ that is Israel. Boycott all Israeli products (barcode beginning 729); support the cultural boycott of Israel, & demand “No military aid to Israel!” 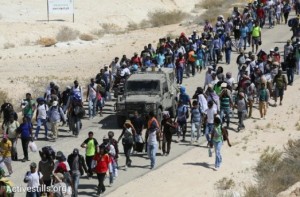