The presidential campaign has eight excruciating months to go. It couldn’t be said they bring out the best in people. Just today, in commenting on Bernie Sanders’ support for drone bombing (which he expressed in a March 23rd interview with the LA Times), one of his supporters said, “Nobody is perfect.”

US drone bombings have killed & injured thousands of people in Afghanistan, Pakistan, Yemen, Somalia, Iraq, & Syria. Somehow I doubt if “Nobody is perfect” would work for them or their grieving families.

Jill Stein is now making overtures to Sanders & even said she would be open to working in a Sanders administration because of their evident ideological & policy affinities on a range of issues like free college tuition & economic inequality. But what about those drones? Shouldn’t they be what you call a deal breaker? Is it possible to provide free tuition & equality with all those bombers to launch?

War & bombing other people to smithereens is just not an issue you can compromise on. It involves not just structural racism but colonialism, barbarism, exploitation, mass murder. There’s no way you can be mealy-mouthed & equivocating about drones & still stake a claim as progressive. If “Nobody is perfect” cuts it as a political defense, then US democracy is in much deeper crisis than it appears. But of course, over half the US electorate doesn’t bother to register or vote because they recognize a travesty when they see one.

As a people living under an occupation which is camouflaged within a patina of democratic set-up & draconian laws, there is a constant erasure of our bodies, memories & identities. We are inflicted with active forgetting in order to survive. At the border where the direct gaze of prose is constricted with barbed wires of multiple coercions, poetry spurts forth. Poetry makes one a witness, rather than just an archivist. One’s life-blood, all that is political & emotional; lived, remaining, & forgotten coagulates into a poem.

Abode of the God?

I am the bones under this earth

where you plan to plant

tulips, daffodils (so dear to my soil)

your rooms are clinging to their walls –

the abode of God, looks less so –

no diviner dare carry a broom

to erase my trace,

in this dank darkness, tinged red

I am not yet done etching tremulous lines on walls

I am not done memorizing faces that are gone,

I am not done counting and keeping time which passed,

there are still dead – dying in certain rooms

Color me mystified by the banal & increasing polemics against identity politics. Not that anyone can define what they are with any coherence. Can women stop violence & discrimination by denying our identity? Will that overthrow patriarchy? Can black & brown peoples put an end to the violence & monstrous practices of structural racism by denying their identity? And what about Muslims who are being targeted precisely for their religious identity to serve US-European militarism? What about Dalits & other oppressed castes in India? What about Rohingya & other victims of genocide?

What’s behind this political campaign is an attempt to discredit feminism & all forms of political resistance to racism that aren’t controlled by whites & males. They try to make it sound avant-garde by blithering about unity of the class but it is racism & misogyny that are disruptive, not the struggle against them. It’s a massive accommodation to social hatred. I’d like to be gentler in my assessment but color me also disgusted with the banality of supremacist apologetics. 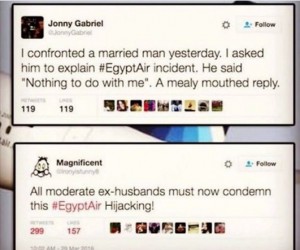 “All moderate ex-husbands must now condemn this ‪#‎EgyptAir‬ hijacking.”

This is a powerful statement by Khurram Parvez, a human rights defender in Kashmir, about Kashmiri Women’s Struggle for Truth & Justice. It was written as a press release on March 8th, International Women’s Day.

What’s remarkable about it is that it shows the leading role played by women in that struggle against occupation, just as women were leading activists in the Arab uprisings. Kashmir is also a predominantly Muslim society so these women put the lie to Islamophobic hysteria which is again crescendoing after the bombings in Brussels & Lahore.

It acknowledges that “women have suffered both at the hands of the militarized occupation & the patriarchal society” & that makes their role all the more inspiring & instructive.

In Jammu and Kashmir, women have suffered both at the hands of the militarized occupation and the patriarchal society. Last 26 years of brutal military response against the freedom struggle in Jammu and Kashmir has increased the sufferings of the women. More than 70,000 people, mostly men have been killed, around 8,000 people subjected to enforced disappearances, thousands of women raped and molested. There are more than 1500 wives waiting for their disappeared husbands, who are referred to as Half Widows due to the legal uncertainty in their lives.

Kashmiri women have dominated the struggle for justice in these cases of killings, disappearances and rapes. It is the women who have always been the first to protest on streets, file cases in the courts, campaign for justice and also sustain the memory of the sufferings.

Whether the mothers, wives, sisters and daughters of the killed and the disappeared or the women who were raped or molested, the women in Jammu and Kashmir have shown exemplary courage in fighting against the injustice. Despite the institutionalized denial of justice, the women continue their unrelenting campaign to know the truth about their disappeared loved ones and the justice for those who have been killed or wronged by the State forces.

On this day let us also pledge to work against patriarchy and hence reduce the vulnerability of our women and give no opportunity to the Indian state to use patriarchy as a tool of repression against Kashmiris. Let us pledge to stand by the women who have sacrificed for resistance and suffer at the hands of the society.

Local news reported about a teenager who committed suicide & interviewed a counselor who urged troubled teens not to “take the easy way out” but to seek help. After struggling with depression & being plagued by personal & social conflicts, overcoming the instinct for survival is not “the easy way out” but what many come to feel is the only way out of profound suffering.

I remember once being smug about suicide, thinking it an act of aggression. Experiencing suicide in my family taught me not to talk through my hat about things I know nothing about–& to understand how vulnerable even strong human beings can be.

Suicide is not an act of aggression nor “the easy way out” but an act of profound grief, loneliness, loss, sadness, & hopelessness. If anyone is considering it they should certainly seek help but often that is insufficient to deter because the pain is so debilitating.

I found help as a survivor from the Samaritans support group.

The real question in this campaign, which has gone unaddressed, is: are we ready for an orange president who bleaches his hair yellow?

Judging from the size of crowds, Sanders is the clear winner over Clinton by tens of thousands. Yet she is foreordained as the candidate. How does that work? Could it be a rigged system?

For that matter, the same is true of Drumpf & Cruz & but it would take a miracle for Drumpf to become nominated. He doesn’t seem to know how government works–as administrators for bank & corporate policies–& you can’t have a schnook that stupid in office. 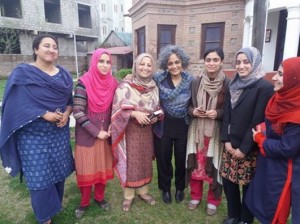 Arundhati Roy is in Srinagar, Kashmir today with the authors of “Do You Remember Kunan Poshpora?”, the book about the 1991 case of mass rape
by the Indian army.

A salute to the authors for their investigation & exposé & to Roy for standing with justice.

(The book can be ordered online)

There is a caricature of Hillary Clinton circulating on FB called “Hillary has big “hands” by artist Anthony Freda. It portrays her lasciviously & naked as a macho man & is a take-off of one done about Trump called “Trump has small hands.”

Despite the progressive critique probably intended by the caricaturist, it is profoundly misogynist & offensive. Regrettably, it is done in the satiric genre of Charlie Hebdo–which is hateful & takes inappropriate license–in this case, not with Clinton’s politics but with her gender.

That shouldn’t have to be spelled out. But to be clear, power politics have to do with capitalism, not gender–not even if you drag in epithets against the patriarchy. After Margaret Thatcher, Golda Meir, Indira Gandhi, Hillary Clinton, & so many other treacherous political women, how can anyone regard corrupt power as just machismo & male? In a subtle way, the caricature disempowers women more than it skewers Clinton.

Wielding social hatred in the form of caricature is not a new phenomenon & didn’t just emerge with Charlie Hebdo. There is probably no more democratic art form than political cartooning which emerged in the 17th century after the democratic revolutions that overthrew feudalism & brought in capitalist nation-states. Cartooning signals the shift in power relations between church, monarchies, & plebeians by the ability to lampoon power. The obsequious posture of serfs is replaced with defiance & ridicule.

But because colonialism was a political feature of those states, racist caricature has always been part of cartooning–particularly in depictions of the Irish, Jews, Blacks, Arabs. George Cruikshank, the great English cartoonist of the 19th century, originated the simian comparison with the Irish.

Thomas Nast, in the 19th century, considered the pioneer of US cartooning, also portrayed the Irish as simian. Nast was an ardent supporter of the Civil War & Black Reconstruction but his depictions of Blacks are outrageously simian. Although he championed Chinese immigration at a time when they were under attack, his caricatures of them are racist & he attributed the violence to Irish immigrants.

The simian portrayal of Blacks has long been used to incite violence & social hatred & plagues caricature to this day–including of Obama & elite athletes. Degrading portrayals of women are no less pernicious.

Caricaturing is not the same as writing a book. It’s a visceral art & shouldn’t require long political tracts of explanation. Granted that racism & misogyny make satire more difficult because whites & men cannot take the easy way out in lampooning. If you can’t tell the distinction between political critique & social hatred, that’s a problem. It should be considered a creative challenge by satirists & caricaturists, not an impediment of their free speech.