It’s not in sync with youth culture or being cool, but I object to using coarse language in discussions on my wall. We’re talking the eff-word. It’s inappropriate in an international forum & always lowers the level of discourse from ideas to epithets. You’ll do yourself a world of good by learning to use a thesaurus & coming up with more full-bodied terms of abuse that don’t offend.

For the first over 25 years of my political life, many of us defended Soviet dissidents against the Stalinist regime. So many remarkable & courageous men & women died in the gulag while Stalinist disciples around the world excoriated them as traitors. Now, those disciples are posting photos of Stalin & going all out for Putin. What is it about Stalinism that loves dictatorship, repression, gulags? What kind of people are attracted to that kind of politics?

Yesterday, the Grand Mufti of Syria Ahmad Hassoun met with Kashmir’s Chief Minister Mehbooba Mufti in Srinagar. Several other Syrian diplomats accompanied the mufti on the trip to India & Kashmir which was coordinated by the Indian Council of Cultural Relations (ICCR), a government agency that does “cultural diplomacy”.

Just so we know who our man the Grand Mufti is: according to the Amnesty report on Saydnaya prison in Syria–part of Assad’s gulag where at least 13,000 political prisoners were hung–the doctors, prison officials, guards, & judges they interviewed said the mufti was one of those deputized by Assad to sign off on torture & execution. This is the guy that Stalinists claiming to represent the US antiwar movement met with, that Islamophobe Tulsi Gabbard met with, that white supremacist & anti-Semite David Duke met with, that fascists Vanessa Beeley & Eva Bartlett hang with & who Beeley calls a “genuinely compassionate & forgiving human being”.

The ICCR did not bring the chief executioner of Syria to India & Kashmir on a cultural exchange. They shuffled him around to legitimize the occupation of Kashmir, India’s persecution of Muslims, & its campaign against Rohingya refugees. It comes as no surprise that India collaborates with the most reactionary political forces in the world like Assad, Suu Kyi Netanyahu, Putin, Trump but isn’t it noteworthy that they use corrupt Muslim religious figures like the grand executioner to legitimize their violent campaigns against Muslims?

According to Kashmiri media reports, the executioner & India’s chief official in Kashmir discussed “the need to weed out the cult of violence from Muslim society” & “the need for inculcating values of peace, tolerance & coexistence among the younger generation.” See how that works? It is no longer persecution, occupation, & genocide but a Muslim “cult of violence.” This is to render dignity to stinking rotten claims that Kashmiris & the Rohingya people are influenced by ‘Wahhabi/Salafi jihadists’ trained in Saudi Arabia which they used to vilify the revolution against Assad’s dictatorship.

The Chief Minister invited the Syrian executioner & his delegation to visit Kashmir again & he extended an invitation for her to visit Syria. This relationship between India, Syria, & India’s representative in Kashmir bodes not well for the people of Kashmir, for Muslims in India, & for Rohingya refugees. But it necessitates collaboration between Kashmiris, Rohingya, Indian Muslims, Palestinians, Uyghars, & their supporters in the struggles against war, occupation, genocide.

(Photo of the executioner & chief minister from Kashmir Life)

Hefner made it sophisticated & progressive to trash women by claiming he was for civil rights & LGBT rights. What about Black, Latino, & lesbian women? Don’t they count? He also tried to turn feminists who objected into blue-nosed man-haters. That’s because we don’t do nuance when it comes to women hating. We leave that to fools. 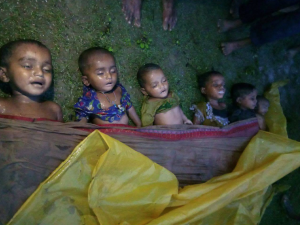 Normally, I don’t post gruesome images, especially death images, because it can be disrespectful. But I do so now so that others may bear witness & oppose the genocide the Rohingya people are living through. Thousands continue to flee for their lives from Burma; many drown in crossing the border river to Bangladesh. Eight small children & several adults drowned a couple days ago when their boat capsized in choppy waters. These are among the babies who died laid out in preparation for burial. This is the face of genocide. May their sweet souls Rest In Peace.

Stand with the Rohingya people in their struggle against genocide & for full human, democratic, civil, & refugee rights. No human being is alien to us. 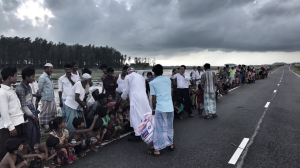 Whatever the criticisms of the Bangladeshi government in its misconduct with Rohingya refugees, Bangladeshi citizens continue to show the greatest humanity by rushing to the border to assist & provide food & water. Here a Bangladeshi family has arrived with sacks of food they’re handing out to a line of refugees. God bless them.

(Photo by filmmaker Shafiur Rahman who has been providing coverage of this crisis since it began.)

Lot of mansplaining going on in the Hefner obituaries. Did you know that the guy who reduced women to a couple body parts was in the forefront of feminism before it even existed & was a pioneer of the sexual revolution? No, I didn’t either. Did you know that ‘on average, pornographers are among the best people ever’? No, I didn’t either. These are the alternative facts of a post truth truthiness world which most often show up in the obituaries of dirt-balls. Better to teach our children to respect the best of humanity, not the exploiters of others.

Hugh Hefner croaked after a lifetime committed to reducing women to our sexuality & to making it culturally acceptable to treat us as toys or objects of abuse. He was the nemesis of feminism. May he rot in hell. Amen.

PS: In my youth, building the first women’s liberation march on August 26th 1970, I was arrested along with two other women for wallpapering the windows of the Playboy Club in NYC with march posters. It’s not an action that brought Hefner to his knees but it sure as hell was fun.

The former FBI & CIA agents who led the shabby little US antiwar movement into the ground just gave Seymour Hersh an award for integrity. One can hardly wait to see who they’ll fete next. There are so many Assadist hacks to choose from. May we suggest John Pilger who will be speaking with fascist Vanessa Beeley next month?

Until social media became a forum for the oppressed to present their case to human rights activists around the world, most of us never knew anything, or at least much, about the Rohingya, Kashmir, Palestine nor did we really understand the international scope of persecution against Muslims. This Pakistan Today article is important for describing the persecution of Uyghur Muslims in China which there is almost no reporting about. If we don’t know about it, we cannot understand what is going on in the world nor grasp the importance of standing with Muslims against persecution, occupation, & genocide.