If it has to be repeated till the cows come home, then so be it: calling on the US or Saudi Arabia to intervene on behalf of the Syrian revolution against Assad is the height of political imbecility. It betrays profound confusion about the character of the US Pentagon, about Saudi & US bombing in Yemen, about the US role in Syria, Iraq, Afghanistan. Worst of all, it undermines defense of Syrians, Yemenis, Afghanis, Iraqis, Palestinians, Libyans, Somalis & hands Assadists a weapon to justify their US regime change crap.

The sophisticates who justify US or Saudi humanitarian intervention into Syria think a principled antiwar position is just so naive & stuck in yesterday. It would be a pleasure to debate any one of them & make chopped liver of their support for militarism.

Assad supporters have no idea how deranged & corrupt they sound when they claim civilian victims of aerial & artillery attacks in Eastern Ghouta are terrorists, actors, & now human shields for terrorists & that a ceasefire is only to allow the terrorists to regroup. When you think like that, you have become politically unhinged beyond the possibility of persuasion. You have gone beyond Islamophobia to outright fascism.

Judging from social media, Assadist political forces significantly outnumber those who stand with the Syrian revolution against Assad’s dictatorship. Imagine how it seems to Syrians under aerial & artillery bombardment now for seven years against an alliance of some of the most barbaric military forces in the world with relatively small international antiwar response & shouted down on social media by Assadists. Palestinians, Rohingya, Kashmiris, Afghans, Iraqis, Somalis, Libyans, & others sustain the same barbarisms & vilifications.

There is no hope for social change if we spiral into cynicism, demoralization, & hopelessness. We never toy with the odds but stand steadfast against war, occupation, persecution, genocide, knowing that the majority of human beings agree with us & reach out to them with confidence & commitment. The problem of popular passivity is the problem of confusion & hopelessness. Our mission is to trust in the good will of most human beings & challenge the propagandists, trolls, & Islamophobic fellow travelers who make up the lion’s share of Assadism on social media. If we want a world suitable for children to come of age in, to live & love in, we have no other choice.

Denouncing Russiagate rather than protesting Russian warplanes bombing Eastern Ghouta is even more deranged than Nero fiddling while Rome burned. 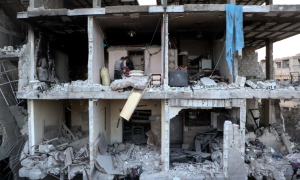 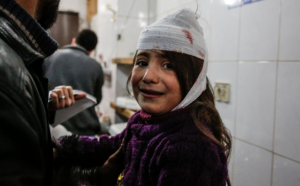 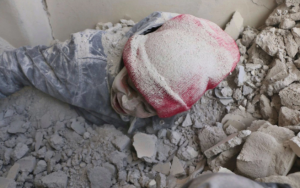 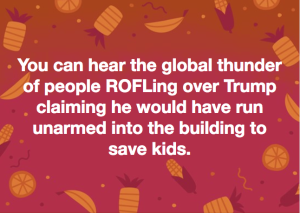 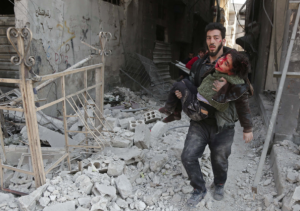 Robin Yassin-Kassab, who co-authored the brilliant book “Burning Country: Syrians in Revolution & War,” has often expressed inexplicable confusions about the political character of regimes other than Russia & Syria. It’s a confusion caused by his estrangement & even disdain for social movements & his reliance on power politics to address the questions of revolution & counterrevolution, & not just in Syria. Instead of looking to rebuilding the antiwar movement, he looks to the US or Saudi Arabia to militarily intervene on behalf of the revolution. How can he be so lost about their counterrevolutionary roles & even bombing of civilians in Yemen, Iraq, Afghanistan, Libya, & Syria that he would look to them to oppose the Assad dictatorship?

In a recent article titled “How Arabs are complicit in massacring Eastern Ghouta’s people,” he lays out some of his confusions about the political character of Arab regimes & their role in Syria, the role of the US in the so-called war on terror, the corruption of the antiwar movement, & his assessment of Arab & Muslim popular opposition to war in Syria. All of his political confusions appear to derive from his peculiar dismissal & assessment of the Arab Spring uprisings in Tunisia, Egypt, Yemen, Bahrain, Libya, Syria, with reverberations in Morocco, Jordan, & Iraq. If one scratches the surface of his misunderstandings, it becomes clear that he looks to power politics & militarism, not popular social movements, including those of a revolutionary character, to bring about social change.

There have been mountains of rubbish written about the Arab Spring uprisings, including the Assadist denial that any of them ever happened or that they were orchestrated by the CIA & Mossad. Others dismissed them as Islamist in political character. In uprisings that have not been seen since the post-WWII anti-colonial uprisings including in Vietnam, millions of Arabs were drawn into action beginning in January 2011 to demand the ouster of dictators & the entire gamut of democratic rights, with Palestinian solidarity in the forefront of their political demands. It took massive deceptions about the character of the army in Egypt, the duplicitous character of the Morsi regime (ruled in fact by the military), the massacre of the Muslim Brotherhood in the streets, the incarceration, torture, disappearance of thousands, ongoing repression on an epic scale, & US & European collusion to reverse the Egyptian revolution. It has taken three years of carpet bombing by a UK & US backed Saudi coalition in Yemen, six years of repression, incarceration, torture, & military policing in Bahrain, & now seven years of carpet bombing in Syria–all with US, European, Iranian collusion–to crush the Arab Spring revolts. Instead of respecting the epic, historic, & continuing struggles of the Arab peoples for democracy, small-minded legalists & snotty cynics dismiss them as failures that only brought more suffering & should never have happened.

When Yassin-Kassab addresses the issue of protests in Arab or Muslim countries–all of them sustaining war, occupation, or brutal repression–in solidarity with the Syrian revolution, he comes perilously close to the parameters of orientalism. In fact, we have heard the exact some questions he asks from Islamophobes who support Assad:

“Ghouta residents may wonder why furious Muslim crowds can be roused all over the ummah by symbolic insults (blasphemous cartoons, or YouTube videos), but not by the actual murder, rape & torture of Muslims in Syria. Why does the regular incineration of Syrian mosques not provoke the rage reserved for occasional Quran-burning Texan provocateurs?….Why were angry Arab protests (rightly) unleashed by Israeli crimes in Palestine, & by American crimes in Iraq, but not by Iranian & Russian crimes in Syria?”

Perhaps Yassin-Kassab missed the hundreds of thousands of Muslims living under severe repression who poured into the streets recently to protest the Rohingya genocide or the frequent protests of solidarity in occupied Kashmir. But he continues with this regrettable analysis:

“Arab states used to sometimes permit rallies against Israel or America. So long as popular rage was channelled towards external enemies, & not directed inwards at Arab regimes or Arab failures, it could fulfill functions beyond just letting off steam. Israel’s apparently overwhelming power – exaggerated further in the paranoid & conspiratorial atmosphere cultivated by dictatorship – even helped excuse Arab weakness.”

Did he look at the epic Arab Spring uprisings of millions of unarmed Arabs against powerful military dictatorships & see weakness or just letting off steam? But again, he continues his regrettable jeremiad:

“But seven years have passed since then {the Arab Spring}. Stunned by the repression that followed the uprisings, terrified by the monsters (like IS) that chaos unleashed, bombarded by misinformation, or simply struggling through the humiliations of daily life, the Arabs seem to barely notice Syria’s tragedy.”

Which Arabs is he talking about who are terrified of monsters? Those in Yemen who have sustained three years of Saudi carpet bombing & where tens of thousands of children are dying of malnutrition? Those in Egypt or Bahrain enduring brutal military repression? Or those in Gaza, the West Bank, & East Jerusalem who have been fighting for 70 years against colonialism, including bombing sieges & military occupation?

Because Yassin-Kassab is estranged from activism & social movements, he cannot grasp the political psychology of thousands who risked everything, who saw their comrades & beloved shot down in the streets or jailed, tortured, raped, disappeared in the struggle for freedom. Social revolutions are powerful events that ask not less than everything from participants & when they are set back or defeated, it can take years to recover from the terror & the shock & the distrust. They have to assess under conditions of repression & informants what happened, what the revolution might have done differently, how it got reversed, how it can be rebuilt.

Does Vijay Prashad, the great ‘Marxist’ & would-be educator of the social movements, have nothing to say about the carpet bombing of civilians in Eastern Ghouta? Does his Marxism allow for barrel bombs, sarin, chlorine gas & incendiary bombs? Did he support US coalition bombing in Raqqa & Mosul? If he does, he should close down his new institute & skulk away in infamy. He has nothing to teach anyone.