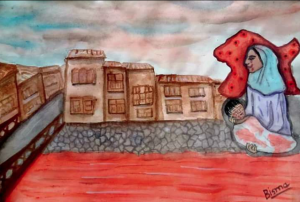 There is so much moral outrage about the policeman beaten to death after shooting into a crowd of unarmed protesters last Friday. Many Kashmiris expressed indignation & condolences to the family since violence is not the character of their resistance to occupation & colonialism.

But when those who have never expressed a word of opposition to the monstrous crimes committed by the Indian army in Kashmir get on their high horse about that killing, it rings hollow & sounds more like sanctimony.

May the officer Rest In Peace & will nationalists please stop using his death to defame the Kashmiri struggle to end the occupation.
Let the voice of little Bisma be heard about the crimes committed by the Indian army in Kashmir.

(Thank you to Kaiser Rather for the drawing)

Noam Chomsky may be profoundly rightwing on Palestinian self-determination, BDS, & the Syrian revolution against Assad, but he did nail Slavoj Žižek as an intellectual fraud. Žižek, once hailed by left intellectuals as the “Elvis of Marxism,” did his best work on the hermeneutics of toilets & exposed his racism, xenophobia, Islamophobia on the issue of refugees.

The question is: does he still get paid honoraria by left intellectuals to talk his gibberish? Or have they moved on to some other fool?

Zizek on the hermeneutics of toilets:

According to Assad supporters, we’re supposed to believe Seymour Hersh that Assad does not gas civilians because of his reporting on My Lai & Abu Ghraib. If Assad does not use gas, is it okay with them that Syrian & Russian bombers use barrel & thermonuclear bombs to kill civilians?

Hersh toured campuses in 1970 reporting about the My Lai massacre & was reamed by antiwar activists because he blamed the massacre on Lt. Calley’s psychology & refused to indict the US government for deploying troops to Vietnam.

If the best response Assadists can make to Bellingcat’s critique of Hersh is to personally smear him for working in a lingerie factory, then perhaps they should consider switching from political commentary to gossip columnist.

Trump’s health plan tanked only because Congress knew from protests around the country that voters would hand them their asses if they voted for it.

Now we should mobilize to go beyond Obamacare & achieve socialized medicine. Enough with the premiums & copays. Free health care is a human ri

There must have been a strategy in letting Trump take an election he didn’t win & clearly isn’t fit for but it was a shortsighted plan. Trump has been a one-man demolition derby to the at least formal dignity of the US presidency.

The young are watching this fiasco where the White House, Congress, Supreme Court, & intelligence agencies all function like incompetent fools. That disrespect, if not contempt, will not redound to the advantage of government stability in the future. Hopefully I’ll live long enough to see chickens coming home to roost for putting us through the presidency of the contemptible orange ass named Trump.

The schnauzer & the three-legged chihuahua escaped the yard again today. After an hour chasing them I just gave up & came home knowing they would come when they were ready. They didn’t & it was dark so I went searching again. I nailed them at 9 pm in an alley a few blocks away.

When I got home there was a car with an irate neighbor blocking my entry. Sophie & Franky had attacked her chickens & killed five of them & she was demanding $25 or she would call the police. What could I say? She had every right to be irate & demand payment. I’m only grateful she didn’t throttle me.

Wonder if Seymour Hersh’s anonymous military & intelligence sources are the retired CIA & FBI agents or military officers who now lead the US antiwar movement to support Assad’s dictatorship & Putin’s intervention in Syria? Maybe they’re not so retired after all.

Bellingcat did a thorough job taking down Seymour Hersh’s latest article denying Assad bombed civilians with gas in Khan Sheikhoun. They did not however take up the strategy of deconfliction which Hersh described as a military collaboration between the US & Russia & through Russia with Syria.

According to him, there are deconfliction monitors aboard surveillance planes constantly patrolling the war zones. This is how Hersh describes it:

“In an important pre-strike process known as deconfliction, US & Russian officers routinely supply one another with advance details of planned flight paths & target coordinates, to ensure that there is no risk of collision or accidental encounter (the Russians speak on behalf of the Syrian military). This information is supplied daily to the American AWACS surveillance planes that monitor the flights once airborne.

Deconfliction’s success & importance can be measured by the fact that there has yet to be one collision, or even a near miss, among the high-powered supersonic American, Allied, Russian & Syrian fighter bombers.”

Assadists have some explaining to do. Like how does deconfliction fit in with their regime change scenario? How can you take down a regime if you’re collaborating with them militarily? Wouldn’t that put you on the same side?

Can anyone remember in US military history when deconfliction was ever before employed as a strategy? It doesn’t make a damn bit of military sense unless the US, Russia, Syria, Iran, & other governments are all part of the counter-revolutionary campaign to bring down the revolution, not the Assad regime. The one thing these governments agree on is that they cannot tolerate popular uprisings demanding democracy; they find dictatorships, military juntas, & feudal autocracy much more conducive to an economic & political stranglehold over the Middle East.

The only principled antiwar demands are: the immediate cessation of Syrian bombing of civilians & the immediate, unconditional withdrawal of all US, Russian, Iranian, & other foreign military forces from Syria.

It’s small-minded to suggest age is the reason for the political degeneration of so many celebrity journalists like Seymour Hersh, Tariq Ali, Patrick Cockburn, Robert Fisk, John Pilger, Noam Chomsky on the issue of Syria. It isn’t age at all but the shabby investigative & theoretical methods they have always exhibited in their writings. They could get away with it in analyzing less complex issues than the Syrian revolution against Assad & before they bought whole-hog into Islamophobia. But mostly they get away with it because of the unquestioning deference they get. They’re still being asked to write & speak when they have nothing left to say as if they were oracular rather than windbags.

How did it happen that the whole gang of them are now defending Assad’s dictatorship against a popular revolution for democracy in Syria? How did they become flunkeys for Assad? Their mutation into apologists didn’t happen overnight but was inchoate in their writings going back decades, evident to those not dazzled by celebrity. It took the emergence of Islamophobia as a propaganda method & the defeats of the Arab Spring to bring their theoretical decrepitude into full relief.

Their analytical skills are not up to revolution because they cannot get past decaying notions about Arabs, about Islam, & about the transformative potential of Arab working people. So be it. They aren’t the first journalists & intellectuals to degenerate around the question of war. History is filled with political corpses who could not withstand the polarizations caused by war & revolution because they are rooted in nothing but their own overblown egos & view themselves as demigods.

There’s a lesson here which is not to defer to experts & authorities but to scrutinize, investigate, question. No man is a god when it comes to the complexities of war & revolution. There are telltale signs in their writings & chief among them are: “What is their attitude toward working people? How do they see the role of working people in social transformation? Do they express racism in any of its malignant forms? If Islamophobia isn’t fundamentally racism, then what the hell is it?

Some guy just sent me a nasty-gram saying he dumped me because I’m full of shit. I’d be devastated if I could remember who the hell he was.