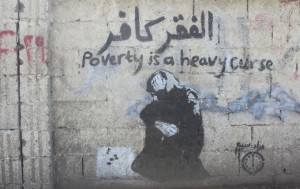 This is a graffiti mural from Sana’a, Yemen but it’s uncertain if it is part of the 12th hour graffiti campaign or was already there–since graffiti has long been a form of political protest in Yemen & played a prominent role during & after the uprising in 2011.

We are told the purpose of this mural was to depict the disproportionate impact of poverty on women. The poignant & powerful image is universal, resonating with the oppressed everywhere.

Many try so hard to divide the human race by religion, gender, ethnicity, & everything else under the sun that makes us different. Artists & poets are here to silence the cacophony & disharmony & remind us to keep perspective; that we are all human beings with far more in common than at odds.

Once we rid this magnificent planet of the things that stink it up like injustice & inequality, the human race has a brilliant future. 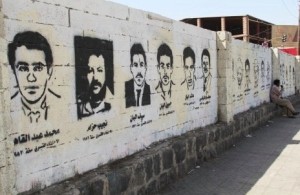