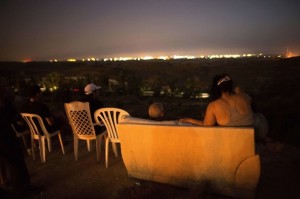 So let’s talk about Sderot for a minute since it played such a big role in exposing the Exodus narrative as an orchestrated fairy tale. On the one hand, there is burlesque involved because they were whimpering about Hamas rockets while sitting in the direct line of fire. But on the other hand, it is deeply troubling that Zionism has corrupted people so profoundly that they could set up parlors to watch & cheer ethnic cleansing with equanimity. And their children were witness to this derangement. Will anyone who saw this scene & know it went on day after day ever be able to forget it?

When you read Zionist apologetics for Operation Ethnic Cleansing & their attempts to rationalize it with that crap about human shields, you realize what a corrosive ideology Zionism is & how it rots the human spirit. That is what makes so many skeptical that there can ever be a democratic secular state where Jews & Palestinians live together. The end of slavery was wrenching for the plantation class too. There’s a lot of things like that in history but justice must be respected whether everybody likes it or not. No one said it would be easy or without some scuffles.

If Sderot stands for anything, it is the transformative power of the Palestinian struggle over the rancidity of Zionism which is rooted in 19th century racism & colonialism. No one need feel pity but neither should we feel superior to Israelis who’ve been schooled in this supremacy. Truth of the matter is, it’s a manifestation of the white supremacy that continues to justify a dozen wars & neoliberal colonialism. Most of us live under regimes up to their eyeballs in this plunder.

Sderot isn’t just a symbol or a metaphor because it happened but it sure as hell provides insight into what happens if you let your government use racism as a weapon against anyone. There isn’t a person on planet Earth that doesn’t know what that means. 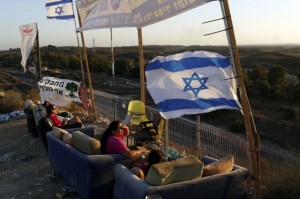 From lawn chairs to setting up the parlor so they don’t miss a moment of the ethnic cleansing going on in Gaza. When we say there is a deep psychosis in Zionism that makes it irredeemable, this would be the proof. We need to continue anatomizing this rancid ideology but this scene would be the pièce de résistance of condemnation. 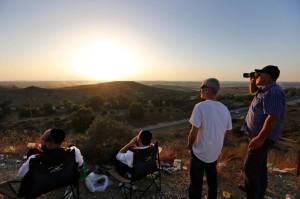