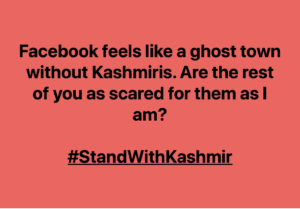 What a colossal act of aggression that India would shut down every form of telecommunication with Kashmir. The personal & political magnitude of that is mind-boggling. The modern world pivots around communication with everyone having personal phones in hand at all times & constant use of computers. Those Kashmiris abroad with ailing or aging parents, with family that may be in vulnerable situations (especially with the disability rate caused by pellet guns), or are worried about how their families are doing under this siege are torn with distress & worry. It’s a cowardly, malicious act of unspeakable dimensions.

One wonders how the government does that. They don’t just flip a switch. Don’t they have to order workers to shut down operations? Aren’t those workers on our side? Or at least shouldn’t they be? We need to look into how they did it because if we are going to change this world & end the ugliness & violence, communicating with each other is imperative & we can’t let them take that away from us again. Amen.

Correct me if I’m wrong, but India’s current military onslaught against Kashmir is the first time there has been such a wide expression of solidarity from Palestinian groups & individuals. Not because they did not support the Kashmiri struggle but because the news blackout that prevailed for so long kept them in the dark, as it did the rest of us. Because of the political & military links between India & Israel to sustain their military occupations & because India has adopted the Israeli form of colonialism–a colonial settler state–the bonds of solidarity between Palestinians & Kashmiris & including Rohingya are massively important, even a ‘game changer’ in terms of building a consistent, active, committed international solidarity & anti-colonial movement. India & Israel may come to regret scrapping Article 370 as the action that helped unite the oppressed in a mighty uncompromising force. 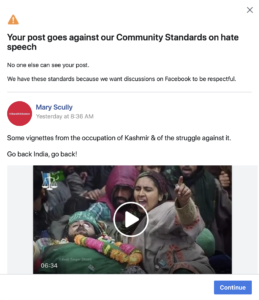 The video about Kashmir that Facebook suspended me for yesterday was shared almost two-thousand times before Facebook censors determined I had violated their standards on hate speech. The video was simply a progression of images from protests & funerals in Kashmir. It was a Kashmiri protest against occupation without any hatred expressed except for colonialism & occupation.

Just coincidentally, I watched a Bollywood movie last night titled “Wazir.” It was cinematically dreadful & politically detestable. The bad guy in the film was a Kashmiri politician who, according to the improbable plot, had been a member of a terrorist gang that massacred everyone in a Kashmiri village, kidnapped a surviving little girl & forced her to pose as his daughter so that when Indian troops moved in to save the day, he could escape. That’s a dystopian tale without a shred of reality. But see how magically it serves nationalist propaganda? It reminded me the entire time of the John Wayne movies I grew up with which glorified WWII & the role of US militarism. Only worse. 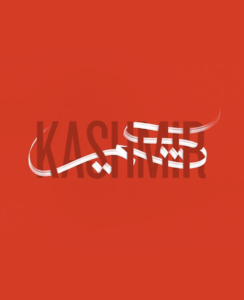 We, the Palestinian Youth Movement, express our solidarity with the people of Kashmir as they continue to bravely resist occupation by Indian military forces.

For decades, the people of Kashmir have fought for their right to political sovereignty and autonomous recognition as a nation and a people. Article 370 of the Indian Constitution
guaranteed these rights and gave Kashmir special status that maintained its autonomy. This month, the Indian government revoked Article 370, resulting in the loss of Kashmir’s special administrative status. The Indian government has effectively stripped Kashmiris of their right to self-determination and forced them to answer to the government in New Delhi.

To enforce this decision on an unwilling people, India has deployed around one million Indian military forces to Kashmir, who are currently occupying universities, student hostels, police stations, court chambers, and other government buildings. It is expected that all telephone and internet services will soon be shut down to prevent communication to the outside world.

We firmly stand with the people of Kashmir in their struggle for liberation as they continue to bravely resist occupation of their land. #StandWithKashmir #Kashmir

If you want to protest for Kashmiris & there are no groups to work with where you live, the easiest way is to call around the local mosques to see if they would initiate a call. In the Rio Grande Valley on the border with Mexico, the mosques have consistently & repeatedly rallied for Palestinians, the Egyptian & Syrian Arab Springs, the Rohingya, & now for Kashmir. The Imams speak, bring their congregations, & always have impressive banners. You’ll also meet a lot of wonderful people. 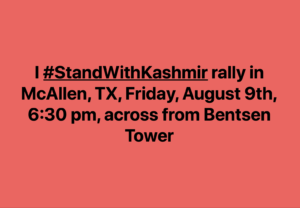