Nothing exposes the cynicism, corruption, & deceits of Assad propagandists more than their defense of Syria bombing the Yarmouk Palestinian refugee camp near Damascus. Eva Bartlett, Vanessa Beeley, & their ilk claim Assad is bombing the refugee camp to clear out ISIS & al Qaeda operatives but they neglect to mention that thousands of Palestinian civilians still live there & are being bombed to smithereens. Reports are now coming in about the bombing of Yarmouk from activist & human rights groups comprised of Palestinians & Syrians. How long will apologists for Assad drown out their voices & instead take the word of white people from the west who’ve spent a matter of weeks in Syria embedded with & on the payroll of the Assad regime?

This is an appeal about Yarmouk from Palestinian & Syrian writers & intellectuals who would not take money to spew the lies that roll off the lips of the detestable Bartlett & Beeley:

This is a quite long report by the Democratic Republic Studies Center (France), the Action Group for Palestinians of Syria (UK), and the Syrian Center for Media and Freedom of Expression on the Syrian bombing of Yarmouk titled “Yarmouk Camp Set on Fire”:

This is 15-year-old Azzam Awida, a Palestinian boy who died this morning from a bullet wound in the head, inflicted by Israeli snipers at yesterday’s Great Return March. May he Rest In Peace.

Israeli sharpshooters are directly targeting children & youth because that is the modus operandi of military occupation. It was a massacre in Gaza yesterday, followed by Israeli bombing. It is long-since time for Palestinian supporters to mobilize in public protest demanding Israel stop the bloodbath & recognize the right of return for millions of Palestinian refugees.

(Photos of Azzam from Great Return March on Twitter) 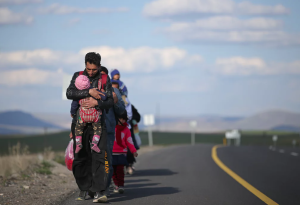 There has been a sustained news blackout on the international refugee crises & it is not because war reporting has dominated the media. Because of its location & certainly not because of its receptivity to refugees, Turkey is ground zero for refugees from Syria, Afghanistan, Pakistan, & Bangladesh. That’s why in 2016 Angela Merkel, on behalf of the European Union, brokered an unsavory cash deal with Turkey to prevent refugees from entering Turkey & to accept refugees deported back from Europe. The scheme applied to Syrians, Afghans, Pakistanis, & other nationalities deemed not qualified for asylum in Europe. It was a scheme that preempted international law about the rights of war refugees & every standard of human decency, especially because Turkey & European countries are involved up to their military eyeballs in creating the refugee crises.

These Afghan refugees arriving in Turkey are part of an estimated 20,000 refugees who have fled war in Afghanistan just in the past three months. They cross through Iran into Turkey’s eastern borders mostly on foot to the major city of Erzurum. As part of its devil’s pact with the EU, Turkey is on a deportation rampage & has hunted down & sent at least 7,000 Afghan refugees on several chartered flights back to Kabul. The Turkish Interior Ministry said the Afghans crossed into Turkey due to “ongoing terrorist activities & economic troubles” in Afghanistan without mentioning the US occupation & massive bombing. In Kabul, a spokesperson for the Ministry of Refugees & Repatriations, flush with CIA payola & functioning as a ventriloquist dummy for the US Pentagon, insisted the refugees who had just transited 2,947 kilometers (1,831 miles) were coming back home of their own free will. Color him bought.

The most powerful way to stand with Afghan, Syrian, Pakistani, & other war refugees is to demand the immediate, unconditional withdrawal of all foreign military forces from Afghanistan, Syria, Iraq, & wherever else they are.

Refugee rights are human rights. Open the borders. No human being is alien to us.

These Rohingya refugees are in the no man’s land border zone between Burma & Bangladesh. It’s a 40-acre (16.2 hectare) buffer zone along the border with a razor wire fence on the Burma side & a creek on the other. Between 6,000 & 10,000 people have been living there in makeshift tents since August 2017 when they fled genocide in Arakan/Rakhine state. In January, Burma & Bangladesh worked out a deportation deal to return thousands of Rohingya to barrack housing in concentration camps since the military has commandeered or razed most of their lands & villages. The Rohingya will have nothing to do with that scheme which would only provide Burmese genocidaires a chance to finish their genocidal onslaught. Reportedly, only one family has agreed to go back. Burma has increased troop numbers on their side of no man’s land in an attempt to intimidate the refugees & accuse ARSA of having infiltrated the camps. One can only hope ARSA militants got out of Arakan alive.

One would think in such a vulnerable situation that Rohingya refugees would be cowed. But despite the military show of force & the coming monsoon season, a camp spokesperson named Dil Mohamed told reporters that they would not be intimidated into returning to concentration camps in Burma & refused to move forward to refugee camps in Bangladesh. “We have no intention to enter Bangladesh. We are not Bengali, we are Myanmar original citizens,” Mohamed told reporters. He said they would return to Burma only if they were guaranteed safety, compensation for the homes torched by the military, & with permission to resettle in their old villages. They would not accept the concentration camps.

This leaves the deportation plan in utter disarray, where it belongs. Decisions about the fate of the Rohingya is for them to decide, not for Burmese genocidaires & the Bangladeshi government.

“According to government figures, there were only 150 militants in the state last year. Do you need 700,000 soldiers to fight 150 militants?”

Check out the absolute lawlessness of Indian occupying forces in Kashmir. They probably get pretty aggressive when with 700,000 troops they have the highest military to civilian ratio in the world–nearly three times what US counterinsurgency experts recommend. India claims it sends troops to quell protesters & stone pelters. But if they withdrew, there would be no protesters & no stone pelters. And no deaths, disappearances, torture, mass rapes, executions.

Probably no one understands better what a nightmare Palestinians are living through than Kashmiris, Rohingya, & those living in the war zones of Syria, Afghanistan, Iraq, Yemen, & Libya. But mother of God, it is truly a living hell to even witness. And you feel like an ass just saying so if you’ve never endured such conditions. All you can do is commit yourself to doing your damnedest to build solidarity so that someday they will win their struggle. But what a hell of a toll it’s taken on them in grief & loss. 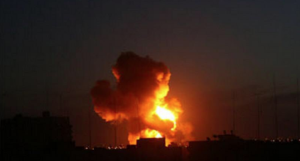 As if today’s massacre at the Great Return March was not enough, it’s being reported that Israeli bombers are now pummeling different areas in Gaza.

Solidarity rallies around the world are not too much for Palestinians to ask. 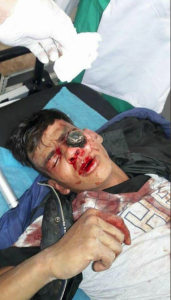 This is a young Palestinian boy struck in the eye by a tear gas canister at the Great Return March today. Several investigative sources report that Israeli snipers are intentionally targeting children at the march. But of course. Just as Israel was accused by human rights groups of intentionally targeting children in its seven-week carpet bombing siege of Gaza in 2014. That is a modus operandi used by Israel against Palestinians, India against Kashmiris, Burma against Rohingya, Syria against revolutionists.

This is a useful article from Electronic Intifada about the targeting of children at the Great Return March: 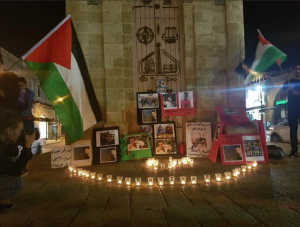 A memorial ceremony in Jaffa, Israel near Tel Aviv for the victims of the Gaza massacre.