A couple Hindutva guys posted Wikipedia entries on my wall (since deleted) about Kashmiri Pandits (Hindus) to discredit the Kashmiri struggle. Jimmy Wales, the owner of Wikipedia, is a Zionist who was honored by Israel in 2015 with a $1 million Dan David Prize for services rendered. That explains why almost everything Wikipedia has to say about Israel or the Palestinian struggle is worthless. That’s just as true of its entries about Kashmir. Nothing they say can be trusted except the geographical locations on a map. They should try not to make fools of themselves by citing Wikipedia as a source. They ought to try reading a few books by reputable, preferably Kashmiri, scholars.

If you are more concerned about the forensics on Jeffrey Epstein’s death than you are about Kashmir, the slaughter in Idlib, or Israeli bombing of Gaza going on right now, maybe you missed your calling as a gossip columnist. Politics may be just over your head & that’s okay. No one will judge you. But first you have to stop parading yourself around like a leader of the revolution. Capitalism has never been so secure under such ‘leaders’.

Artist Marc Nelson’s tribute to the several White Helmet rescue workers recently killed in ‘double tap’ bombing sorties: a double-tap strike means bombing a target, waiting a period of minutes, often during which first responders arrive, & then bombing the target a second or even third time. Syrian & Russian bombers do it for the sole purpose of killing White Helmet rescue workers.

White Helmets have been maligned in the worst possible ways by Assadist two-bit propagandists like Bartlett & Beeley because the courageous humanitarian work of these men & women exposes the criminality of the Assad regime. History will record things quite differently: Bartlett & Beeley will be shamed as the Ann Coulter & Leni Riefenstahl of the Assad dictatorship. Those political deadbeats who fell for & promoted their lies will be shamed right along with them but have already become politically corrupted & irrelevant. Syria is not a complicated issue. Either you stand with the civilians being persecuted & bombed for trying to build a democratic society or you stand with Syrian, Russian, Iranian, Hezbollah, & US-coalition forces working in their own ways to pulverize the Syrian Arab Spring.

A salute to the work of the White Helmets. May they Rest In Peace after sacrificing their lives to trying to make this world a humane place to live. 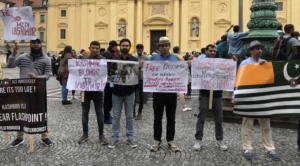 Beside the massive protests in London & Lahore yesterday, there were protests reported in Germany, Italy, France, Belgium, & Portugal. It’s not certain what German city this protest was in. 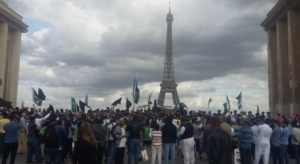 China’s genocidal persecution of the Uyghur Muslims puts it in no position to speak with any moral authority on India’s onslaught in Kashmir. So maybe that’s why they came out with this pitiful statement when they would have better kept their traps shut: “The Kashmir issue should be resolved properly through peaceful means in accordance with the UN Charter, relevant Security Council resolutions & bilateral agreement.” By “peaceful means” do they mean like the concentration camps they employ against Uyghur Muslims?

Foreign Minister of Pakistan Shah Mahmood Qureshi tweeted that the UN Security Council meeting “validated Pakistan’s clear view that the matter of IOK is a global one & that India’s unilateral action is unacceptable. It has confirmed that a peaceful negotiated solution is the only way forward.” There are stronger condemnations of children picking their noses in public. Genocidal conditions in Kashmir demand a lot more than this kind of diplomatic hogwash which doesn’t even amount to shaking the naughty finger at India.

Images & videos from the Birmingham, UK #StandWithKashmir rally. We also know that activists from Birmingham attended the London rally of thousands yesterday.

A very good article on the idiocy & political blunder of Israel & the US barring US Congresswomen Omar & Tlaib from visiting Palestine.

You read so much about evil in the world that honestly you think there may be no hope, that the human race is doomed. Then you see thousands, nay millions, of people like Palestinians, Kashmiris, Rohingya, Uyghur, Syrians, Yemenis, Afghans, & others stand up against oppression against seemingly insuperable odds & thousands of others around the world protesting with them & you know the human race still has a fighting chance. Those on the front lines of oppression are leading the struggle to make this world a suitable place for human beings to live & love in. That’s why we stand with them. And may it be said, that Muslims are the predominant forces involved which is why the Islamophobic ‘war on terror’ has become the oppressor’s battle cry of our times.