There is considerable lobbying by progressives, including Black progressives like Danny Glover, against covering the controversial mural in San Francisco’s George Washington High school which realistically portrays George Washington as a slave owner engaged in the extermination of Native Americans. Their arguments are compelling. But not as compelling as the Black students & parents who object to the mural for portraying them in a demeaning way, even though the artist’s intentions were to protest that treatment.

We only have to remember the very similar dispute over Mark Twain’s “Huckleberry Finn,” once required reading in the high school curriculum, read & swooned over by whites who saw it as an anthem against racism & slavery. It portrays a little white street kid saving a Black adult slave on the run & is the very origins & matrix of white savior culture in American literature, art, & film. It’s a farce & a mockery with Twain putting minstrel language in Jim, the slave’s mouth. It was Black parents who saw their children disturbed & traumatized by the depiction of themselves as helpless buffoons who finally challenged its place in the curriculum.

We have to respect the sensitivities & judgements of Black children & parents, not malign them for attempting to whitewash & censor American history. As one Native American demanding the removal of the murals said, they represent “American history from the colonizers’ perspective.” It is often from the mouthes of children  & certainly from the oppressed that we best understand our own history, our own political blindnesses, our own compromises with white savior rancidity.

The mural will not be destroyed; it will be covered, hopefully with positive images of the monumental achievements & contributions of Blacks & Native Americans to world culture, science, & emancipatory theoretics.

There are moments when the oppression & tragedies sustained by Palestinians, Kashmiris, Syrians, Rohingya, Uyghur, Afghans, Yemenis, Iraqis, Somalis, Indigenous tribes of the Amazon, refugees, & so many others are just overwhelming & we feel PTSD symptoms coming on just from witnessing them. We take a breather & then come back after remembering that millions of children are enduring the tragedies we cannot even bear to witness. That’s the responsibility of those fortunate enough not to be on the front lines of oppression.

The news from Kashmir just gets worse & worse. We can parse & quibble over whether Indian fascism in Kashmir is comparable with German fascism but you’d have to be a fool to deny that what India is imposing in Kashmir is fascism & genocide.

After transferring my FB posts to my blog, I realized how much I post every day. There is an overwhelming amount of material in media about Kashmir where before there were decades of a news blackout. That did not change until Kashmiri activists on social media began educating us & campaigning about their freedom struggle. Their voices have been silenced & it isn’t necessarily safe for Kashmiris living outside Kashmir to speak out because they have families in Kashmir to consider. We have to run with this political opportunity & that means excessive posting so that non-Kashmiris know how important their struggle for self-determination is. I hate to keep saying it, but if my wall is just too much, I wouldn’t blame you if you muted me awhile.

J&K police have filed cases against Kashmiris for ‘posting “sensitive remarks” on Facebook that could disturb law & order in the state.” They are not only threatening prosecution but cancellation of visas or passports. How does that distinguish itself from fascism?

This is a report about 17-year-old Palestinian Ismail B. Ajjawi who was scheduled to begin classes at Harvard on a scholarship. After landing in Boston’s Logan Airport, he was interrogated for several hours & then immediately deported when immigration officials found social media posts on his mobile from his friends critical of US policy. 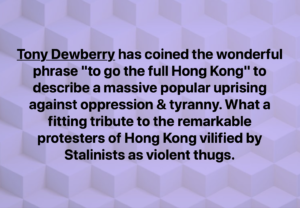 “Dalits who seek the annihilation of caste must boycott Mayawati {an Indian politician & leading political figure for oppressed castes}, a champion of Brahminical-colonialism, and her BSP, a party of the Brahminical-colonial Indian ‘mainstream’. And Mayawati should start reading Ambedkar to understand concepts such as caste and the nation-state. Maybe one day she’ll learn her lessons and begin speaking the truth. #StandWithKashmir”

“And if someone says we are just romantics, inveterate idealists, thinking the impossible, that the masses of people cannot become almost perfect human beings, we will have to answer a thousand & one times: Yes, it can be done; we are confident that humanity as a whole can advance.” 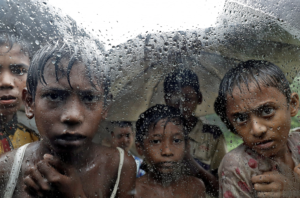 Amnesty reports are a mixed bag, often times blaming the oppressed for genocide against them. But this report on the denial of education to Rohingya children by the Bangladesh government is quite cogent.