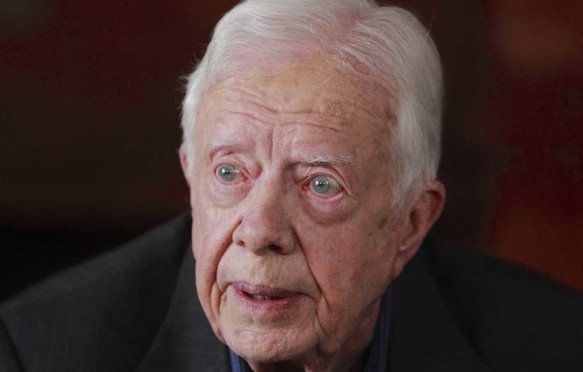 Former US president Jimmy Carter (who many naifs consider a saint) announced yesterday that he opposes BDS. He was speaking for The Elders, a group of senior political figures formed in 2007 by Nelson Mandela. Its membership includes Desmond Tutu & Mary Robinson, the former president of Ireland & UN official. Tutu, who has long supported BDS, has not spoken out to distinguish himself from the group position. One hopes such a disavowal is forthcoming.

Carter’s opposition to BDs may surprise those who thought his 2006 book, “Palestine: Peace Not Apartheid” an indictment of Israeli apartheid because of the immense furor it evoked in Zionist circles. Alan Dershowitz was among those who flew into orbit, challenging Carter to a debate. The book, in fact, was entirely equivocal in designating Zionist policies as apartheid but was damning in depicting the barbaric realities of those policies in the West Bank. A brief tip of the hat to Carter for standing the guff he took for writing the book.

But Carter is no champion of Palestinian justice. He isn’t just an outspoken promoter of the two-state, bantustate solution for Palestinians; he has blood on his hands from brokering the Camp David Accords in 1978 when he was president. Those accords, signed between Anwar Sadat of Egypt & Menachem Begin of Israel, were so flawed they were even rejected by the UN. Jordan & Syria refused to participate (at least openly) & Palestinian representatives were excluded. The Accords had nothing to do with Palestinian justice but with neutralizing Egypt & making it a partner with the US & Israel in isolating Palestinians. The Accord provisions established the framework for the arrant betrayal of Palestinian justice negotiated by Yasser Arafat in the Oslo Accords in 1993.

In return for massive trade concessions to Israel (including ending the boycott by Egypt & opening the Suez Canal to Israel), the US committed to billions of dollars in military aid to Egypt & established it as a military bulwark for US hegemony against Palestinians & in the entire region. Sadat was assassinated for his betrayal but the military arsenal created in Egypt under Mubarak, created by the Camp David Accords, made it possible to defeat the initial tsunami of the Egyptian uprising in 2013. That is the legacy of Jimmy Carter.

Many equivocate or outright oppose BDS saying the comparison with apartheid in South Africa is inexact; it’s only an approximation or is outright invalid. This isn’t just pedantic or sophistic thinking; it’s missing the forest for the trees. South Africa gave us the term “apartheid” but they didn’t invent the ignominious policies. It existed in the US South & throughout the Americas for hundreds of years before it was initiated in South Africa in the 20th century. The US Civil War ended slavery but in an attempt to reverse Black Reconstruction in the late 19th century, extreme racist segregation was reinstalled using paramilitary violence. US apartheid, called “Jim Crow,” was every bit as oppressive & violent as apartheid in South Africa.

Equivocators will point out differences between South African apartheid & US Jim Crow; there are plenty–as there are between South African & Israeli apartheid. It isn’t the differences that make them all apartheid but the common features: segregation in housing; economic, educational, & social disadvantages; denial of basic human, democratic, & civil rights; violence; repression; murder; incarceration. Need we list more!?

The BDS movement against Israeli apartheid & ethnic cleansing is separating the wheat from the chaff in international politics. The BDS movement is not just a potent economic lever against apartheid; it is playing a key role in countering the “Exodus” mythology about Israel & in delegitimizing the repugnant Zionist dystopia of an only-Jewish state–a ghetto writ large. The term ghetto was originally used to describe the city areas where Jews were restricted & segregated. Is a ghetto the Zionist vision of freedom!?

The economic impact of BDS in some ways has less importance than the political exposé of Zionism & its dystopic vision–a vision which not merely concedes ground to racism but joins the reactionary forces & pretends their methods of tyranny & supremacism are the road to freedom.