Indian media is reporting & nationalists are twittering with a fury that London authorities allowed “murderous Pakistani thugs,” “hooligans,” & “former terrorists” bussed in from all over the UK to protest outside the Indian High Commission today without amping up security. They’re denouncing London Mayor Sadiq Khan, Boris Johnson, & the UK Parliament, threatening diplomatic repercussions, & demanding an apology to India.

Indian media & nationalist twitterers are the only sources that claim the protesters were violent. The Times of India reports that they “threw eggs, glass bottles, shoes, plastic bottles of water, lighters, bananas, batteries, potatoes, hot coffee, their own placards, & apples. “One man who was holding an Indian flag was left covered with eggs. There were scores of eggs, vegetables, & bottles all over the ground.” Wouldn’t you love to have seen that!? But it’s entirely the figment of a fevered nationalist imagination. No other media source reports such a farcical scenario.

The estimated 10,000 protesters of many different nationalities came by bus, car, train from Birmingham, Luton, Bradford, Manchester, Nottingham, & elsewhere to express their opposition to India’s military siege in Kashmir & commitment to Kashmiri freedom. They had placards reading “Kashmir is Burning”, “Free Kashmir”, even “Modi: Make Tea Not War.” Indian media & nationalists denouncing unarmed, peaceful protesters in London who are exercising their democratic right to protest is of a piece with their full, psychopathic support for the occupation of Kashmir with nearly one-million troops, locking down the entire population in their homes, closing schools & mosques, a complete telecommunication blockade, & shooting pellet guns, rubber bullets, tear gas shells at unarmed protesters. That’s the character of their stinking, rotten politics. 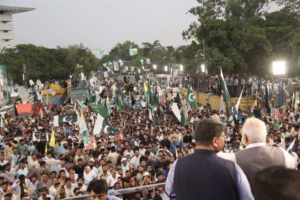 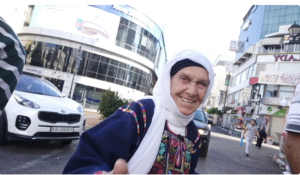 Didn’t Trump tell US congresswoman Rashida Tlaib to ‘go back where she came from’? That would be Detroit, But now he ‘supports & respects” Israel’s decision to bar her from entering Israel or the Palestinian occupied territories? Her grandmother & other relatives in the West Bank were looking forward to seeing her & now can’t because she has the temerity to speak up for Palestinian justice against Israeli colonialism & occupation. Now that’s democracy for you!

Photos from the London #StandWithKashmir protest of 10,000 today. 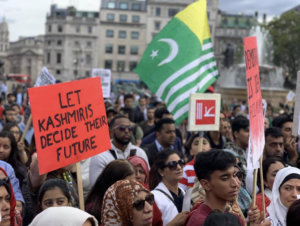 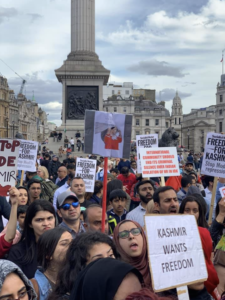 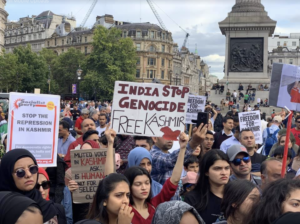 Israel is barring a visit by US congresswomen Rashida Tlaib & Ilhan Omar who planned on entering occupied Palestine. Israel, like India–& like Israel trying to destroy the US Bill of Rights by outlawing BDS. The US ambassador to Israel says US ‘supports & respects’ Israel’s decision.

No images yet, but there are #StandWithKashmir protests in New Delhi, Pakistan, & Toronto today as well as massive protests in London & NYC. 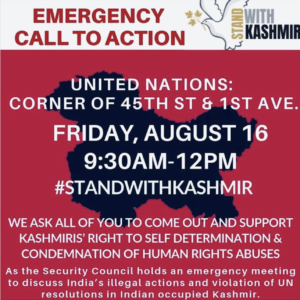