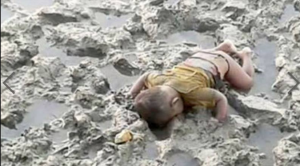 Many will remember the photo on top of 16-month-old Mohammed Shohayet, a Rohingya refugee who drowned with his mother, uncle, & 3-year-old brother last December when their boat capsized in the Naf river as they fled from genocide in Arakan state. He was called the Rohingya Aylan Kurdi after the Syrian child who drowned in September 2015 crossing from Turkey to Greece.

The child in the bottom photo is not identified by name but only as a Rohingya child who drowned in the Naf river a few days ago when the boat she was in capsized. Yeni Şafak, the conservative Turkish media source that reported her death, did not mention if her family survived the capsize but they were also fleeing genocide in Arakan state.

It’s likely Yeni Şafak reported this incident because of Erdogan’s feigned support for the Rohingya people which, like his support for Palestinians, often falls short in the execution, becoming all hot air & little action. When thousands of Rohingya refugees were fleeing in rickety boats in May 2015, Erdogan talked of sending Turkish navy ships to rescue them but never managed to give the order. The fate of thousands of Rohingya has never been investigated by any agency.

These are very tragic images not used to exploit the suffering of children but to expose the character of the genocide against the Rohingya people.

An article from Pakistan Today about forcible disappearances in Pakistan: 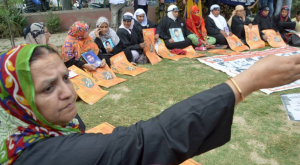 We should take a moment to honor Parveena Ahangar, known as “the iron lady of Kashmir” & the chairperson & co-founder of the Association of Parents of Disappeared Persons (APDP). She once said the APDP, which was formed in 1994, “originated out of my pain, & pain of hundreds of mothers like me.”

Her 17-year-old son Javed Ahmad Ahangar was disappeared in the middle of the night on August 18, 1990 by the NSG, an Indian special forces unit. She looked for him in jails across India.

That is her in the left foreground of this photo at the APDP protest today in Srinagar. 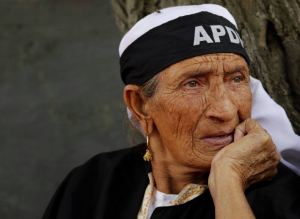 Hajira Begum is the iconic face of resistance to forcible disappearance in Kashmir. As an activist in the Association of Parents of Disappeared Persons (APDP), she is present at most of their protests. She once said “my only wish before death is to see the faces of my two sons who were disappeared.”

Her son Bashir Ahmad Sofi was picked up from his shop in 1995 by Indian counter-insurgency troops & has not been seen since. To avenge this, her sons Nazir Ahmad & Muhammad Rafiq joined a militant group & both were killed in separate encounters where Indian soldiers are paid bonuses or given promotions for every person killed. Her youngest son Aijaz Ahmad was later also disappeared. Her husband died from grief at the deaths & disappearances of his four sons.

She now lives in extreme poverty & requires assistance for medicines, food, & other necessities but remains a prominent activist in APDP.

We honor & stand with her & the APDP to stop the vile practice of forcible disappearances & to demand an accounting of every person disappeared by the Indian occupying army. 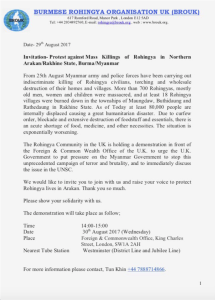 Rohingya activists in the UK have called a protest today against the genocidal campaign in Arakan state. The call, including time & place, is in this letter: 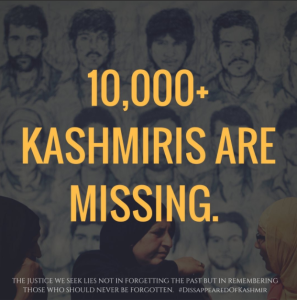 Between 8,000 to 10,000 Kashmiris have been disappeared since 1989–about one mostly men & boys every day for 28 years. Historical amnesia is not an option. Those who have lost beloved through forcible disappearances always create photo montages & protest with them decades after the crimes.

“The justice we seek lies not in forgetting the past but in remembering those who should never be forgotten.” #DisappearedOfKashmir

We protest forcible disappearances to stop the vile practice & to demand an accounting of every person disappeared by the Indian occupying army. 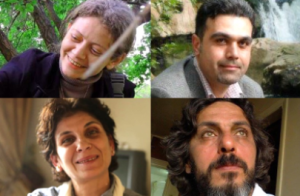 75,000 have been forcibly disappeared in Syria since 2011 by regime authorities or by armed groups.

Amnesty has initiated a campaign to highlight disappearances in Syria at: https://tensofthousands.amnesty.org/reported-missing/where they posted these photos of Razan Zeitouneh, Wael Hamada, Samira Khalil & Nazem Hammadi who they described as “peaceful Syrian activists who worked at the Violations Documentation Centre (VDC), an NGO that monitors human rights violations in Syria. The four activists were deprived of their liberty after being abducted from the VDC offices in Duma, part of the Eastern Ghouta area which is under the effective control of armed opposition groups, in the evening of 9 December 2013 & have not been heard of since. One of the most powerful groups in the area at the time of the disappearance is Jaysh al-Islam, who have so far denied involvement with the crime & appear to have made no significant efforts to investigate what happened to the four activists.

We protest forcible disappearances to stop the vile practice & to demand an accounting of every person disappeared by the Assad regime or by armed militias.

Today is International Day of the Disappeared. Human rights activists in Srinagar, Kashmir are holding a day-long silent sit-in protest. Please express solidarity with their protest & with activists rallying around the world against forcible disappearances by posting images, poems, articles, expressions of opposition to this monstrous form of repression & violence which involves torture & execution.

Many are saying it’s not Trump; it’s the system. How astute. That would explain why the same people give him backhanded support, refuse to criticize him, & ridicule all the protests against his policies. Maybe they don’t know what the system is. Knock knock, is anybody home?

Hats off to the first responders, deputies, police officers, & hundreds of volunteers who are rescuing people & pets in Houston.