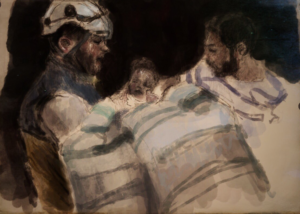 Artist Marc Nelson’s tribute to the several White Helmet rescue workers recently killed in ‘double tap’ bombing sorties: a double-tap strike means bombing a target, waiting a period of minutes, often during which first responders arrive, & then bombing the target a second or even third time. Syrian & Russian bombers do it for the sole purpose of killing White Helmet rescue workers.

White Helmets have been maligned in the worst possible ways by Assadist two-bit propagandists like Bartlett & Beeley because the courageous humanitarian work of these men & women exposes the criminality of the Assad regime. History will record things quite differently: Bartlett & Beeley will be shamed as the Ann Coulter & Leni Riefenstahl of the Assad dictatorship. Those political deadbeats who fell for & promoted their lies will be shamed right along with them but have already become politically corrupted & irrelevant. Syria is not a complicated issue. Either you stand with the civilians being persecuted & bombed for trying to build a democratic society or you stand with Syrian, Russian, Iranian, Hezbollah, & US-coalition forces working in their own ways to pulverize the Syrian Arab Spring.

A salute to the work of the White Helmets. May they Rest In Peace after sacrificing their lives to trying to make this world a humane place to live.