Nancy Reagan died today. Don’t try to tell anybody you feel bad about it. She was a vapid, shallow, insufferable snob married to a dangerous nincompoop. He would have remained a nonentity if he hadn’t been a complete sycophant to power, honed in the skills of sucking up by service to General Electric. You could hear that sucking sound all the way to the White House.

We won’t dance on her grave or take a leak on it either–like we did on Ronnie’s grave. But we raise a toast to say the world is a little better off today without her. 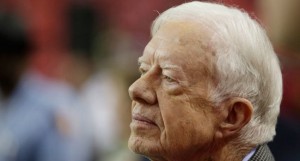 There’s a farcical side to lesser evil politics & you gotta find it or you’ll need medications to get through the election campaign. Jimmy Carter (former US Commander in Chief of monstrous human rights crimes now born again as some kind of human rights guy) provides some needed comic relief. He told Britain’s House of Lords (a real venue of democracy) that he’d choose Drumpf over Cruz, “which may surprise some of you.” That’s like saying he’d choose beheading over hanging; diphtheria over cancer; waterboarding over electrocution. And the same is true of the choice between Clinton & whoever.

Well it may surprise that gathering of stiffs but it’s of a piece with Carter’s political resume. He brokered the Camp David Accords which armed the Egyptian military against its own people in return for abandoning support for Palestinians. He maketh protest about Israeli human rights crimes & occupation whilst publicly opposing BDS, the only weapon Palestinians can wield in self-defense. Is there some lesser evil involved here that the rest of us can’t discern? Or is it Carter’s realpolitik dressed up in double-talk?

Carter’s vision of options is not a good guide to political action. He’s been dead wrong most of his life & caused a lot of human suffering for a lot of people in a lot of countries. That’s where lesser evil takes you. It ain’t good enough for working people.

(Photo of Carter by AP) 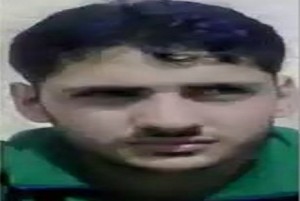 The story of 19-year-old Ishaq Ahmad Parray (known as Ishaq Newton), the Kashmiri man shot dead by Indian soldiers last week in a shootout, raises the issue of guerrilla warfare as a political strategy. According to the story, he was a serious-minded, scholarly, pious young man who joined the guerrilla group called Hizbul Mujahideen to fight the Indian military. He wasn’t a delinquent youth or criminal in any way & it stunned his family & those who knew him that he would join a guerrilla group.

Those who came of age politically in the 1970s well know the phenomenon of inspired youth, just like young Ishaq, all over Latin America & elsewhere (notably Northern Ireland) joining guerrilla groups to fight occupation, military dictatorships, & repressive regimes. It was a disastrous strategy, especially since those juntas were backed by the military arsenal & training of the US Pentagon. Tens of thousands of young people were disappeared, tortured, murdered in unspeakable ways.

Serious-minded political people around the world had to debate the strategy of guerrilla warfare & come to terms with its political failures–primarily that armed struggle by small, even committed groups, is not the solution for the oppressed. The struggle against oppression is politically organizing working people to stand united, not military training for what is usually small numbers of students & rookies.

The strategy of political organizing is frustrating for many young people because of contending currents of thought in broad movements & the political debates, even wrangling often involved. In social movements there are conservatives who compromise or drag their asses; there are impetuous who want trashing actions; & there are sectarians who want things done their way or they will be divisive & not cooperate. There are all kinds of competing perspectives that have to be debated out, often under repressive conditions. Some lose patience with all that & turn to guerrilla strategy as a shortcut past the frustrations of movement building.

This is not to fault those who choose guerrillaism but to remove their perspectives from the realm of criminality & explain why pious young people would opt for not just a misguided but a dangerous choice against repression & occupation. Most young people in Palestine & Kashmir have charted the harder strategy of Intifada or unarmed struggle against military occupation–which is why international solidarity is essential to their struggles. It is also why Israel is so hellbent to associate violence & terrorism with Palestinians–as in the trumped-up rubbish about a “knifing Intifada”–& why the Indian government justifies summary executions of ambushed Kashmiri youth.

Our support for those struggles is unconditional. We don’t demand first that activists conform to our specifications nor do we turn on them if they do use a knife or pick up a gun. We understand the impatience & desperation of some youth against brutal tyranny. The criminals are not those who oppose occupation; the criminals are the occupiers.

This is a photo of Ishaq Ahmad Parray whose funeral was attended by thousands of Kashmiris chanting pro-freedom slogans. We honor him as they do. We honor all those who have died in the struggle against tyranny. May they Rest in Peace. 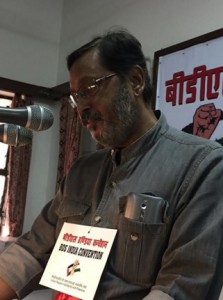 US based veteran activist Mary Scully had sent a solidarity message to the BDS India convention which was read out by Satyam Varma on behalf of the organisers.
‪#‎BoycottIsrael‬ ‪#‎BDSIndia‬ ‪#‎IndiansAgainstIsrael‬, ‪#‎IndianWithPalestine‬ ‪#‎BDS‬

It is such an honor to express solidarity & forge bonds of unity with Palestinian solidarity activists in India. Palestinians stood alone for decades in their struggle against colonialism, marshaled unarmed against the mightiest military forces in the world. At last, the big battalions of active support are coming to their defense. Their intransigence is a beacon to suffering humanity so much like the struggles of Indians, Irish, & many other nationalities against English colonialism, & like the struggle of the Vietnamese against French colonialism & American militarism. The links & affinities are profound & teaching people in the Americas the brutal truths about our own past & present of colonizing Indigenous peoples.

Indian activists must well understand the power of boycott in opposing colonialism from their own historic experience. Perhaps less known is the role of international solidarity since study of those movements, at least in the US, has only been published in the last several years. There was active support from Irish & Irish-Americans because of their own familiarity with English colonialism. There were several solidarity groups formed by Indians in exile in the US & elsewhere. Indians traveled & lectured throughout the world explaining the struggle for Indian freedom & its importance to people around the world.

The Vietnamese had a regular & guerrilla military force experienced from decades of opposing French colonialism & US military might but they were no match for the power of the US Pentagon. The international antiwar movement of millions of people all over this globe was essential to their victory against the US & the Vietnamese leadership acknowledged the important role of solidarity in restraining the Pentagon in its military barbarisms–which were as unbridled as Israel against Palestinians.

The massive power of US militarism backing Israeli apartheid against unarmed Palestinian Intifada makes forging bonds of solidarity more imperative than ever. It not only advances self-determination & makes justice for Palestinians possible, but it breaks down the walls of isolation, racism, xenophobia, & suspicion that are fostered between peoples under capitalism as a means of social control. It helps create a new way for human beings around the world to relate to one another as brothers & sisters. It moves forward to that new day when solidarity is no longer a political imperative but has become the joyous birthright for children everywhere.

Several have asked me to post about the political struggle at Jawaharlal Nehru University (JNU) in Delhi, India along with analogous student struggles in Pakistan. It’s an extremely important development involving free speech & the right of dissent, rightwing nationalism, the occupation of Kashmir, & the relationship to Pakistan. Students have always played a leading role in political change; their activities reflect deeper, broader currents in society. So it’s necessary for activists around the world to understand what’s going on with students in India.

Please be patient with my tardiness & I’ll try to post about the student struggles in the coming week. If you have articles or analyses you think important, please message them to me.

Will US presidential campaigns ever be the same again after Drumpf talked about the size of his penis? Can the Republican Party posture any dignity when it’s clearly a cesspool of machismo, racism, stupidity, & backwardness? Can the ruling elite represented by both parties allow the charade of electoral politics to be exposed in such a degrading way & reduced to a circus side show? Are they willing to risk a president with fascist politics rather than employing the usual strategy of patiently eroding & dismantling our rights?

They have a crisis of leadership. But then so do we. Progressive forces in this country don’t have enough cohesion & unity to even stand steadfast & massively against war. That’s the crisis of leadership that matters. That’s the political problem that needs to be solved because the President of the US does not represent working people; he/she represents Wall Street & war.