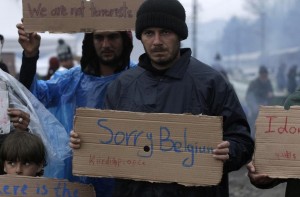 When the obituary of the EU is finally written documenting its inglorious existence & celebrating its demise, this photo should be included.

What a poignant & galling historic sarcasm that refugees whose lives were devastated by US & European bombers must stand supplicant at the locked down borders protesting that they are not terrorists & apologizing for a terrorist act committed 1,300 miles (2090 km) from where they stand.

Open the damn borders. Immigration is a human right.

Let the children of war speak for themselves.

This is a boy at the Idomeni camp (near the Greek-Macedonian border) which aid agencies have evacuated citing security concerns. Is it because they are afraid of starving refugees or of Greek riot police who will soon enter the camp for forcible deportation to Turkey? 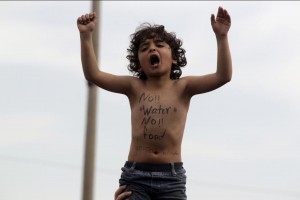 As an entry point for refugees from the Middle East & Africa, Greece long served as the front lines of European Union (EU) immigration policy. Prior to the election of Syriza in January 2015, Greece was notorious for vigilante assaults on refugees, refugee homelessness, squalid detention centers, & the inability of refugees to move north because Greece, at the behest of the EU, refused to process papers.

Syriza was elected promising a more humane policy toward refugees & for a few months last year that meant 850,000 refugees freely entered & could move north with relatively little impediment after registering. But it was only a matter of time after Syriza signed the devil’s pact with the EU selling out its own working people that it would revert to its previous barbarism.

The refugee registration centers issuing papers soon became detention centers redux described by refugees as a hell hole with refugees sleeping exposed to cold without tents or sleeping bags, subject to police beatings, hunger, lack of sanitation. Journalists were prevented from visiting without escort, from photographing the squalid facilities, or speaking to refugees. Riot police outnumbered aid workers, especially since the UN refugee agency (UNHCR) only assigned a dozen personnel to assist.

Under the terms of the new deal brokered between the EU & Turkey, refugees (who manage to get their dinghies past NATO patrols & Turkish & Greek coast guard vessels attempting to disable their boats in the Aegean Sea) are being arrested, incarcerated in the former registration centers, & will be deported to Turkey. Turkey isn’t a safe haven for its own citizens & has no functioning refugee system in place. The EU agreement is nothing but a dumping operation.

Now, because they don’t want to be implicated in the EU barbarisms (administered by Syriza) at the detention centers, the UNHCR & MSF (Doctors Without Borders) have withdrawn & suspended operations. There is no one to monitor the situation or provide even a modicum of aid. Actually, the UNHCR withdrawal may be a backhanded way of supporting EU policy.

MSF, citing security concerns, has also suspended operations at the Idomeni camp on the Greek-Macedonia border where up to 20,000 refugees are stranded in unbearable conditions. The camp is flooded by rain water, buried in mud, freezing cold, stinks to high heaven from lack of toilet facilities or ability to bathe, lacks adequate food & water. Refugees are getting sick, hear rumors about deportation, are terrified for themselves, their children & elderly, & engage in frequent protests to get the border opened up. Yesterday, a man set himself on fire in protest. If some people snap under such miserable conditions, that is not a judgement of them but a condemnation of EU refugee policies.

This little boy is at Idomeni, participating in a refugee protest demanding the border be opened. We stand with them demanding: Immigration is a human right. Open the damn borders. 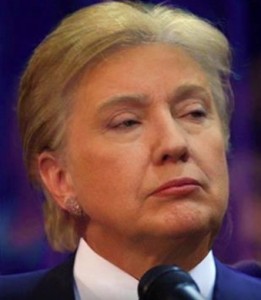 Smug, arrogant, hateful: that about sums up the lesser evil options.