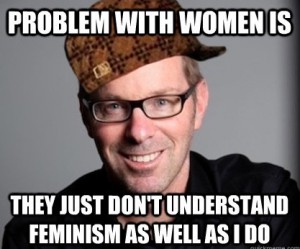 One of the most stressful & protracted conflicts on my FB wall was in 2011 over the Slut Walks phenomenon where women half-dressed in sexy lingerie marched ostensibly to reclaim the streets. Many, even those opposed to “identity politics,” heralded it as the rebirth of feminism. Many feminists, young & old, including myself, but particularly Black & Latina women in the US & Dalit women in India, considered Slut Walks racist & playing to misogyny–exactly as FEMEN does today.

You wouldn’t believe the vituperations we received. I was told by men & even some women that I was “sex-negative” & had aged out of credibility & usefulness as a feminist–drawing of course on the misogynist cliche that older women are as good as dead.

But I am one to do my homework. I went through every city I could & contacted the organizers of Slut Walks. In some places, the organizers were students with the brand of feminism that considers exhibitionism to be empowerment. In most places the organizers were prostitute front groups & strippers, & believe it or not, in several cities the organizers were men. Let’s get real! The feminist revolution will not be led by such forces who are among the most politically fractured, vulnerable, apolitical, & unorganized in the world.

The organizer in Los Angeles was a man named Hugo Schwyzer, unknown then except on a few feminist blogs he wrote for but now notorious. He was a college professor who called himself a “male feminist,” a category I do not accept–anymore than I would call myself a Black activist because I march for civil rights. Hugo’s schtick was promoting prostitution & pornography.

Our man was consequently publicly exposed as a pervert, a sexual predator, an unstable opportunist who used feminism to get laid by dozens of women students half his age & by prostitutes he invited to his classroom to speak. When he was completely discredited, he did one of those born-again moves, did a little meltdown, some public prostrations & contritions. Then he laid low & took an extended leave from disgracing himself any further in the public eye–hoping a new generation of coeds would come of age that he could prey on when he re-emerged from hiding.

Now, after being dumped by his fourth wife, he’s trying to get back in the dating scene & is on FB asking for internet dating advice for a sexual reprobate with an international reputation as a dishonest, manipulative swinger who uses women & tried to murder his girlfriend. My suggestion would be he join a cloistered monastery on the North Pole.

I post this not in the vindictive spirit of “I told you so.” Just let me restate for the record: the women’s revolution will not be led by women in their underwear playing up to misogyny. The struggle against women’s oppression is deadly serious because the violence is so extreme & we will allow no confusions about whether or not we mean business.

(Photo is meme of our “male feminist”)

Maybe I ought to clarify something: there are many people I know who vote lesser evil out of good will because they see no options. There are no options in the electoral arena. The lesser evil voters I have trouble with are those who call themselves socialists, even Marxists, or those Palestinian, antiwar, & immigration/refugee rights activists who don’t just quietly hold their noses & vote Sanders but actually campaign for him. It’s unseemly at best but to my mind it represents a betrayal of those being bombed, ethnically cleansed, and/or deported. 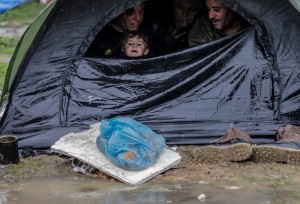 Umpteen millennia of human civilization & this is what the European Union (EU) is reducing it all to. These are refugees in an overcrowded tent at Idomeni, Greece on the border with Macedonia. There are 30,000 refugees stranded on that border not allowed to move north.

Turkey is now engaged in attacking Kurds militarily, cracking down violently on press freedom, & allowing its bases to be used for US warplanes in Iraq & Syria. But the European Union (EU) deems it a ‘safe country’ & has brokered an unsavory deal with Turkey to take back refugees on dinghies intercepted by NATO & FRONTEX gunboats in the Aegean Sea.

The EU & Turkey have had a deal since last November that in exchange for €3 billion, visa-free travel for Turkish nationals into the EU, & fast-tracking Turkish entry into the EU, Turkey would prevent refugees fleeing massive bombing from crossing their border with Syria. In the new deal hammered out this week, the Turkish representative tried to extort twice the blood money in return for taking back refugees intercepted at sea or deported straight back to Turkey when they land in Greece.

UN & human rights officials are “deeply concerned” at the “blanket returns” of refugees because they are flagrant violation of international law & EU regulations governing treatment of refugees. They also question how Turkey can be considered a ‘safe country’ for refugees when it already has 2.5 million living in squalid conditions without adequate housing; when it is forcibly deporting Syrians back to a war zone; & when it does not recognize refugee status for those fleeing the war zones of Afghanistan & Iraq & is deporting them.

One wishes the UN would do more than stand there & do hand-wringing, that it would mobilize some sanctions against the EU like they do so often to legitimize war & bombing. But doing more is up to human rights & immigration/refugee rights activists around the world since the UN is now the executive body of neoliberalism, the barbaric phase of capitalism.

Bernie Sanders supporters are proudly circulating reports that comedian Sarah Silverman tweeted her endorsement of his campaign. That’s no surprise since last year she hosted a Sanders rally in Los Angeles.

Sanders supporters who also support Palestinian justice & BDS must be unaware of Silverman’s active & strong support for Israel which she has shown in several ways but most ignominiously in support of Israel’s murderous seven week carpet bombing siege of Gaza in 2014. During that siege, an organization called Creative Community for Peace published a statement in several entertainment journals signed by 190 Hollywood celebrities including the most prominent Zionists like Mayim Bialik & Haim Saban, the Zionist financial backer of Hillary Clinton; & political reactionaries like Arnold Schwarzenegger & Kelsey Grammer.

Silverman also signed the statement which said in part, “Hamas cannot be allowed to rain rockets on Israeli cities, nor can it be allowed to hold its own people hostage. Hospitals are for healing, not for hiding weapons. Schools are for learning, not for launching missiles. Children are our hope, not our human shields.” That puts Silverman not only in the company of Haim Saban but also Elie Wiesel, Zionism’s archdeacon who circulated an ad in several publications during the 2014 siege accusing Palestinians of using their children as human shields.

Creative Community for Peace is a pro-Israel group founded in 2011 to bring together “prominent members of the entertainment industry to counter the cultural boycott against Israel & promote an accurate image of the Jewish state.”

Sarah Silverman is ‘feeling the bern.’ Meanwhile Gaza is becoming uninhabitable from repeated Israeli carpet bombing sieges. Human Rights groups have detailed several human rights crimes, including the use of white phosphorus munitions in one siege & directly targeting children. In the 2014 siege alone, 2,310 people were killed, including 521 children; 11,000 were injured including permanent disability from losing limbs; over 100,000 were made homeless.

It’s a cliche that ‘politics makes strange bedfellows.’ But in the politics of expedience over principles, that’s actually the norm. That explains the other cliche that those who lie down with dogs get up with fleas.

(Photo of children in Gaza during 2014 siege from Ibtimes)

In following the vagaries of lesser evil thinking & damnations of Clinton & Cruz in FB discussions, it turns out many now consider Drumpf the lesser evil. The political crisis in progressive circles is profound. Mostly profoundly embarrassing.