Bassem Eid is a Palestinian who once worked as an investigator for B’Tselem, the Israeli human rights group which plays an important role in documenting the occupation of Palestinian territory & human rights crimes by the Israeli military. Somewhere along the way, our man went sour–maybe partially because he felt slighted in recognition & partially because he saw fortune lied with Israeli apartheid. We only speculate because it’s an old story with a cliched plot: man gets wounded ego; man seeks revenge by making an ass of himself.

He formed his own group in 1996 with the misnomer, Palestinian Human Rights Monitoring Group, specifically so he could go after Palestinians for human rights crimes, but it folded in 2011, ostensibly for lack of funds & probably because he couldn’t get anybody to work for him.

Now Eid has aligned himself with the Gatestone Institute in the US run by Elie Wiesel (a Zionist ideologue & big fat liar), John Bolton (US official under Bush), Nina Rosenwald (a notorious Islamophobe), & James Woolsey (former CIA director). Gatestone publishes writings by Alan Dershowitz to give an idea of its low intellectual caliber.

Eid is now touring campuses in the US & Canada, racking up honorifics all over the place by calling himself a Palestinian human rights activist & campaigning against BDS. He associates with Avi Posnick, the managing director of Stand With Us New York, a rightwing Zionist group that got the New York State Assembly to pass a resolution last year condemning BDS. The strategy is to get the NYS Assembly to follow up with a bill that goes beyond condemnation of BDS to outlawing New York from investing in companies that participate in BDS. The resolution was supported by both Democrats & Republicans. Of course.

(Photo is screen shot from video of regrettable moment:https://www.youtube.com/watch?v=Q_pLDGNrhKs)

Got an insistent friend request from a guy whose wall postings were private. When I accepted his request, the lead posting was about the “Jewish ethnic cleansing of Europeans.” That ain’t happening on my wall. Our friendship lasted about 30 seconds. Now he’s in Facebook hell.

How many times & how many ways do I have to say, if you want to hate on Jews, don’t come knocking on my door.

So the plot sickens in US lesser evil politics in an entirely predictable & cliched way. Tom Hayden, an ultra-left political activist in his youth, aged into an entirely conformist Democratic Party politician. That’s not an unnatural progression for grandstanders who have no commitment to or confidence in working people as agents of social transformation.

He has issued the first volley in uniting Sanders’ supporters behind Clinton using alarmism about Drumpf. (The typos in his statement are all his):

“I am seeking a seat on the DNC to spread one message far & wide: to defeat Trump & win back the Supreme Court, we need to build a united front to defeat Republicans in November & elect a bloc of senators in swing states. The most important need is to put together a ticket & platform doing the least damage & divisions in our ranks. Build without bruising? We have suffered losses in close or stolen elections before & with we might have conducted ourselves differently. Trump represents a growing, virulent, violent & hateful resentment of too many groups to event count up. I do what I can everyday to engage both Hillary & Bernie supporters on how to best repair their differences & achieve unity in the short & long run.”

That Hayden is a hack comes as no surprise. That Sanders’ supporters would endorse this proposal exposes the fault line of lesser evil politics: that it lacks the bearings of political principle. It would be good for Sandernistas to explain how the differences between Clinton & Sanders can be brokered. But of course, meaningful differences never existed in the first place, except in the realm of chimera.

It is with a mixture of glee & regret that we report the death of Chilean General Sergio Arellano Stark, a chief architect of the September 11, 1973 coup against Salvador Allende that ushered in the reign of terror under General Augusto Pinochet.

Arellano is most notorious for organizing death squads, including one called the Caravan of Death, whose crimes & massacres of Chileans are too gruesome to describe.

Like all generals who achieve such heights of criminality–including Mubarak & Omar Suleiman of Egypt, Westmoreland & Schwarzkopf of the US, Ríos Montt of Guatemala, the six generals who led the 2009 coup in Honduras, & so many others (many of them trained at the US School of the Americas)–Arellano escaped justice in the courts, which in all cases are run by cohorts of the generalissimos. In an international pattern of injustice we are familiar with, he was found guilty of a few crimes out of hundreds but because of his advanced dementia was not required to serve prison time.

A forensic report on Arellano’s brain was done for the courts when he was trying to weasel out of jail time. It was concluded the combination of dementia with multifactorial Alzheimer led to mental derangement, including cognitive & psychotic disorders. He was also diagnosed with metabolic encephalopathies (a syndrome of overall brain dysfunction) & alcoholism. One could claim these were the very qualities which made him so effective as a general of death squads. But it’s also a possibility they were the direct consequence of his murderous, rightwing politics.

The glee is that he croaked; the regret is that he never answered to justice for his monstrous crimes against the people of Chile.

Good riddance to him.

(Photo of Arellano by Santiago Llanquin/AP)

Clearly, Israel & its supporters intend to weaken BDS by tying up supporters in civil liberties battles over our right to boycott. But they are also targeting companies who more & more are withdrawing from business contracts with apartheid Israel.

The civil liberties battles have to be fought so we can use them to educate about democracy, the character of Israeli apartheid, its importance to maintaining tyranny in the Middle East & elsewhere, & about the importance of boycotting as a way to politically arm unarmed Palestinians. 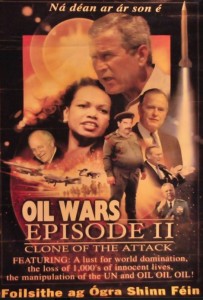 This is a poem Rafiq Kathwari wrote in 2003 in response to the US invasion of Iraq. Today is the 13th anniversary of that monstrous event.

Civilization’s Cradle,
I said, is broken.
I am a witness
I must howl.
In every well in Baghdad
A rafiq is weeping
While long black coats
(With gas masks)
Huddle at the Wailing Wall
As if prayers could halt
Smart bombs.

“Rhetoric, not lyric,”
My peers echoed Yeats
“Argue with yourself not others.”
An adjunct admonished,
“A warhead soaring
From the earth’s womb
Was over the top. Navy Seals
Stockpiling kneepads was sick.
Not ars poetica.”