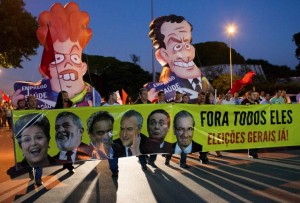 One of the most disturbing trends in “left” politics is the glibness of political analysis about extremely momentous events. There is often no depth to analysis, a tendency to rely on academic celebrities who have no experience in social movements, a prepossession with electoral politics. At heart, what is going on is a disinterest in working people who are viewed as brute beasts to be led.

That is manifesting right now in reports about the massive demonstrations going on in Brazil against president Dilma Rousseff. An estimated 3 million people from every corner of the country are in the streets demanding her resignation over corruption charges. Such protests have been going on since 2013 when at least a million people took to the streets, set off by fare increases on mass transportation.

The corruption of her regime & fare increases are only the ignitions for these protests. What is at issue is the entire panoply of neoliberal austerity policies imposed for the past several years on working people in Brazil, coming down with particular devastation on indigenous tribes. Rousseff, who has been in office since 2011, is an integral part of the process as administrator of these policies for the Brazilian oligarchs.

When massive protests erupted in 2013, it was after years of isolated protests by indigenous tribes whose lands were being violently expropriated by multinational agribusiness & mining corporations. Those neoliberal projects included the Belo Monte Dam, a hydroelectric dam complex that would destroy the environment & involved extreme human rights crimes against indigenous peoples being displaced to urban slums.

There were also constant protests by organizations of homeless people, many of them displaced farmers, farm workers, & indigenous people. There were constant pitched battles between slum dwellers & Brazilian riot police protecting bulldozers as they tore down slums for neoliberal gentrification schemes.

As the Brazilian regime prepped the country for the 2014 World Cup & 2016 Olympic games, the favelas (urban slums) were occupied & administered, & in some cases forcibly cleared under a state of martial law. In one of the ugliest scenes, displaced Guarana Indians living in an abandoned museum near a sports venue were militarily evicted with no place to go.

Brazil had become notorious for the tens of thousands of homeless children & for vigilante assaults & murder of them, & had become a preferred destination for the sex tourist industry preying on children.

When the 2013 protests erupted, they were in some places led by indigenous peoples who for the first time in decades were not marching alone. Brazilian working people had an entire legal & human rights brief against the regime. But immediately left demagogues began promoting the idea on social media that the protests were taken over by fascists. The same charges were made by left demagogues about the 2011 popular uprising against the dictatorial Assad regime in Syria, against the 2014 Hong Kong protests, & against protests in other countries.

Now we hear from the same political sources that the 3 million people marching in Brazil are the privileged elite who oppose Rousseff’s so-called egalitarian policies. There are reports that the US Koch brothers are bankrolling rightwing forces in Brazil to bring down Rousseff. Of course they are–& the CIA is there too, probably along with Mossad agents & Brazilian agents provocateurs.

Those multinational corporations invested in agriculture, mining, & hydroelectric dams have billions at stake in Brazil & will pull every dirty trick in the book to hijack popular protests & give them a rightwing dynamic to render political support to the status quo of neoliberal austerity at the expense of working people. That does not invalidate those protests one iota but shows the necessity for international solidarity against Rousseff’s corruption & policies.

This contingent of protesters among the 3 million are auto union workers at General Motors in Sao Jose dos Campos, Brazil. They are carrying inflatable effigies of Rousseff & a Brazilian senator. The banner has pictures of Lula da Silva & other politicians. Lula da Silva, president prior to Rousseff, was involved in implementing neoliberal policies & is now part of her regime. The banner reads, “Out all of them, General Elections now!”.

If left demagogues want to claim these protests are fascist & rightwing, they will have to demonstrate that Rousseff’s policies have benefited working people. They can begin with explaining all those sports venues built for the elite sports games while favela dwellers, indigenous tribes, & homeless people are being forcibly evicted & assaulted. 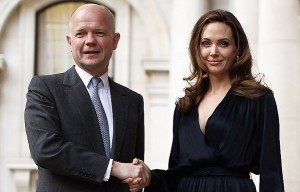 It would be touching that Angelina Jolie showed up in Syria to advocate for refugee rights–& it cannot be denied her brief statement was pro-refugee–but she does so only to more effectively promote military action, as she has more than once, including at the UN, for US military intervention into Syria; in her film about Bosnia titled “In the Land of Blood & Honey”; & in Libya.

Jolie, who is politically conservative, is a shill for humanitarian wars & uses her celebrity for that purpose. Why has she never spoken out against US wars in Afghanistan, Iraq, Somalia, or US drone bombing in Pakistan & Yemen? Why does she only show up in countries to promote intervention under the guise of humanitarianism?

She is a member of the Council on Foreign Relations, a so-called think tank for promoting US government policies & is here shown with conservative British politician William Hague.