Whoever pulled off the bombing of the Brussels airport committed a monstrous crime against unarmed civilians. I hope they are hunted down & prosecuted. No one who values justice has any soft spot for such barbarous & bankrupt political methods. But I’ll be damned if I’ll join those wrapping themselves in the Belgian flag & chanting “Je suis Bruxelles” or “Ik ben Brussel.”

What happened in that airport is a microcosm of what is happening in the killing fields of Yemen, Syria, Iraq, Afghanistan, Somalia, Gaza. When people start organizing against those wars, then the crocodile tears will prove more than just another manifestation of white supremacy.

My deepest sympathies to the families & friends of those killed & for those injured. But enough with the “Je suis” crap unless it includes all who are victims of US, European, Israeli, & Saudi coalition bombers. 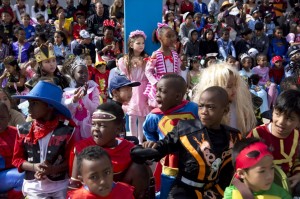 This is an extremely deft & subtle propaganda piece which appeared in the Guardian-UK. The caption says it’s children in Tel Aviv watching an acrobat perform during the Purim festival, a Jewish religious holiday.

The solidarity being forged between US Blacks & Palestinians is a cause of great alarm to Israel, especially since they have always touted the role played by American Jews in the civil rights movement of the 1960s. That progressive role is beyond dispute but of course they weren’t the only white people to participate in that movement.

Israel is being exposed for the ethnic cleansing of African refugees & immigrants–either imprisoning them or deporting them back to war zones like South Sudan where Israel is engaged in substantial economic plunder. There have also been frequent mob actions against refugees encouraged by Israeli politicians.

Last year, after an Israeli court ordered the release of African refugees held in detention over a year, the Israeli government declared those released would not be allowed to live or work in Tel Aviv or Eilat.

But perhaps these children are Ethiopian Jews. Israel has about 136,000, most of whom were airlifted into Israel in the 1980s & 1990s after a farcical rabbinical ruling they were direct descendants of the Jewish tribe of Dan. Such are the sarcasms of Israeli immigration policy.

In the past few years, there have been countless protests by Ethiopian Jews against the mob violence & protesting systematic discrimination & racism against them. Over half of Ethiopian Israelis live in poverty & only half graduate from high school. In 2013, Israel admitted it forcibly administered birth control injections to Ethiopian Israeli women without their consent or knowledge.

Given racist realities in Israel, it is not conspiracy-thinking to call this charming photo of children at a festival in Tel Aviv nothing but shameless propaganda to peddle the image of Israel as a haven of ethnic harmony when it’s a cesspool of white supremacy toward Palestinians & Africans.

Cut through this crap & build BDS.

The Vampire’s Ball: no matter who you vote for, this is who you get.

Lesser evil speculations about who is worse–Cruz or Drumpf? Clinton or Drumpf?–make a burlesque of the presidential campaign which needed no new infusions of debasement. But instead of comedy, this campaign has become cause for mourning–not the crisis of leadership among the 0.1 percent but among progressives.

If you want to change the world for justice, turn away from the fiasco & rebuild the antiwar movement, Palestinian solidarity & BDS, civil liberties, immigrant/refugee rights, the new civil rights, women’s, LGBT movements.

You wouldn’t be wasting your vote; you’d be helping change the world. 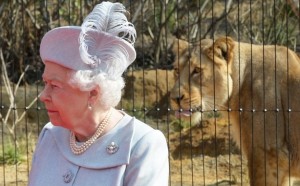 History is moving so swiftly that Betty Windsor has gotten lost in the shuffle but taxing things have been going on in her otherwise indolent life. Willie was accused of being lazy by his helicopter crew mates for not showing up to work. Monarchists rushed to his defense saying he was a young father who wanted to stay home with the kids. Don’t all aristocrats want to take over from the nannies & change nappies rather than engage in gainful employment? So try that alibi next time you want to take a year off work. See if it flies.

Andy, the perennial near-do-well, if not outright reprobate, purposefully crashed his car into a castle gate after it failed to open automatically. In his defense, he was half in the wrapper & unaware of any obstacles. He thought it was just a serf he’d run down & on the wages Betty pays them, they’re easily replaceable.

Betty has kept Harry busy on goodwill adventures all over the world to repair the damage he keeps doing to his public image. She doesn’t want to send him back to Afghanistan for photo ops since last time she did that, he almost singlehandedly handed the war to the Taliban.

Her 90th birthday celebrations are coming up next month & go on for three months with nightly horse shows to console her for having to pass on the horse track & let all those trifectas go by without laying a bet. Camille, her track mate, is inconsolable. There will be a street party for 10,000 of Betty’s closest friends wearing those silly hats that typify the British aristocracy & are historically derived from horse culture–as is the entire culture of the aristocracy.

She recently visited the London Zoo with her good-for-nothing consort to open an Asiatic lion pavilion. Zookeepers thought they’d have to keep some of the lions in isolation during the visit for safety reasons but the smell of all that blue blood was an unexpected deterrent to mayhem. And Phil never once had to be held back from attacking the lions.

Photo is Betty & lion. You shouldn’t have to ask but Betty is on the left.