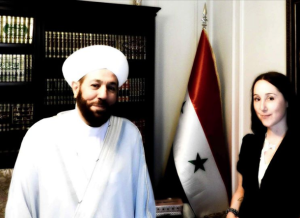 Yesterday, fascist propagandist Eva Bartlett posted this photo of herself with Syrian Grand Mufti Ahmad Hassoun commenting that it “brought out the illuminati-ists” & that she looked forward to her next meeting with “this wonderful spiritual leader.”

Bartlett once edited Sott, a journal directly associated with David Icke who believes that extraterrestrial reptiles in the form of Illuminati/Jewish bankers run the world–a theory, minus the crazy-assed reptile thing, that they hold in common with Adolph Hitler. Icke & Bartlett likely descended on Syria along with other fascists because the Assad dynasty had purged all Jews from the country, making it suitable political terrain for anti-Semites. They are just as antipathetic to Muslims which is why their propaganda entangles threads of both hateful ideologies. Bartlett is so emboldened by the near-defeat of the Syrian uprising against Assad that she no longer feels a need to disguise her motivations & hatred for Jews.

As for the “wonderful spiritual” leadership of Grand Mufti Hassoun, according to the Amnesty report on torture in Saydnaya prison, Hassoun is the chief hangman who signed off on the torture & hanging of at least 13,000 political prisoners in a five-year period. In October 2017, he came out on Indian TV supporting the Burmese junta’s genocide against the Rohingya people & in support of India’s plans to deport 40,000 Rohingya refugees who the Modi regime characterize as terrorists. On his visit to Kashmir, he supported the occupation in order to “weed out the cult of violence” from Muslim society.

Hassoun’s support for fascism & genocide in Burma, the occupation of Kashmir, & the persecution of Muslims & Rohingya refugees in India is of a piece with his support for the Assad dictatorship. It ought to give pause to those taken in by Assadist propaganda that they are marching with fascists, Islamophobes, anti-Semites, white supremacists, rabid nationalists. It’s not too late to jump ship from this crowd but it is perilously close to being so.

Bartlett is a professional propagandist, not an independent journalist. She sucks off the Palestinian struggle for credibility & like Alice Walker, another Icke fangirl, should be held at arm’s length by those who believe in the justice of Palestinian self-determination which is inextricably bound to the fate of the Syrian revolution against Assad.

The Syrian revolution is being destroyed by bombers & special forces from nearly 70 countries. If you’re talking about that imaginary plan for a greater Israel posited by fascists & anti-Semites, don’t be surprised when I kick your ass to the curb.

So much adulation for Jeremy Corbyn. So little criticism of his silence on the bombing of civilians in Syria. Swell that he champions the homeless & disabled, the NHS & worker & human rights. But what about the homeless, disabled, healthcare, worker & human rights of those being carpet bombed in Syria? That’s not a tolerable political foible. It’s a fatal political betrayal.

This moving video was an expression of solidarity with the Syrian revolution from Kashmiris in December 2016 at the fall of east Aleppo to Assad forces allied with Russian & Iranian forces. Unarmed civilians were no match for squadrons of bombers & special forces. This is not a requiem but a tribute to the Syrian revolution against dictatorship. Kashmiris understand setbacks in struggle against tyranny. They also understand revolutionary commitment to freedom.

Fascist triumphalism against the popular revolutions of the Arab Spring is premature. Social revolutions are tectonic struggles & we know that true because massive military repression & incarceration, massacres, carpet bombing, military intervention by several foreign militaries, along with the complicity of the corrupt antiwar movement have been necessary to crush them in Egypt, Yemen, Bahrain, & Syria. They will rise again but they can only succeed by rebuilding antiwar & solidarity movements on a principled basis.

“Black skin is not made of steel. You don’t need 20 bullets. That’s not “fear”, that’s rage. School shooters, church shooters, concert shooters, cinema shooters and fedex bombers are scary. Not a young father in his grandmother’s backyard with a cellphone. #StephonClark” 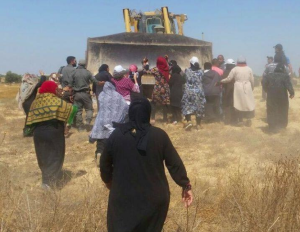 Stand with Palestinians & honor the economic & cultural boycott of Israel. Buy no product whose country of origin is Israel. 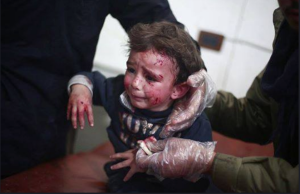 “We are human too. March for our lives.”