“Resist the narrative. Assad is fighting against ISIS. ISIS are using civilians to achieve international support / a ‘humanitarian’ reprieve. Do not buy into white helmets’ Oscar winning performances. You need to choose your monsters. And Assad is the best we have. #Ghouta”

Resist the fascist narrative. Stand with the people of Ghouta against Assad.

This is a cogent article on Syria written by a Syrian refugee living in the US. The only issue I take with it is the designation of “leftist” for antiwar & socialist activists (& sometimes longtime deadbeats) or their imposters who support the Assad dictatorship & carpet bombing of civilians. Maybe we need a new definition of left & right in politics since even Hillary Clinton is called left & calls herself the resistance. What the hell does leftist mean these days?

As historically defined, if you support dictatorship, colonialism, war, occupation, genocide, you are rightwing–the extremes of which are fascism, but which include Zionism, anti-Semitism, Islamophobia, Assadism, white supremacy, every kind of stinking racism & elitism. Regrettably that means that those who support Assad & bombing civilians are far right, not leftists, no matter what kind of delusions they have in their pea brains.

It’s not too late for those who lost their way by following people like Tariq Ali, Vijay Prashad, Fisk, Pilger, Cook, Mackler, & the other degenerated leftists to reverse course & stand with the Syrian people against Assad & all his military allies. But it’s getting there. A good rule in politics driven home by the deplorable degeneration over the Syrian revolution is: don’t be an uncritical follower of big wheels who don’t know their ass from their elbow but ride the crest of old prestige. Those who support Assad because they’re driven by hatred of Muslims, Arabs, or Jews were always goners. Good riddance to them.

It’s a sad world we live in. Nobody wants to be a chronicler of human suffering. We all want to post about love & puppies. But there’s no other way to change things if we don’t know what the hell is going on & don’t take a stand against it. We do it not because we wallow in the suffering of others, God forbid, but because there are human beings involved, including little kids. That’s just the way it has to be.

Protests in Kashmir over another massacre in Shopian.

This is Mahmoud Abou Zeid, known as Shawkan. He is one of 53 jailed journalists in Egyptian prisons. He & other defendants on trial now are charged with illegal protesting, use of force, illegal arms possession, vandalism with “a terrorist intent,” belonging to a banned group, premeditated murder. The prosecutor is demanding the death sentence. In fact, Shawkan is a photojournalist who was on assignment & carrying a press card.

While groveling Assadist journalists like Robert Fisk, John Pilger, & Patrick Cockburn & embedded professional propagandists Bartlett & Beeley are feted around the world by fascists, Islamophobes, anti-Semites, & corrupted antiwar forces as “independent journalists,” those authentic journalists who chronicle war, occupation, repression, genocide are hunted like animals, exterminated like bugs or jailed as criminals. The Burmese military wiped out or disappeared almost the entire network of underground citizen journalists who chronicled genocide against the Rohingya at great peril to their lives. Two Reuters reporters in Burma are now in jail for trying to expose a massacre of Rohingya men. Kashmiri photojournalist Kamran Yousef has been in jail for over six months for covering protests & funerals of those killed by occupation forces rather than ‘social work’ by the Indian army & paramilitary forces like blood drives.

There are organizations like Committee to Protect Journalists (CPJ) who aggressively monitor & wage defense campaigns on behalf of jailed journalists. We must get on the stick & significantly increase our defense work on behalf of jailed journalists in the interests of protecting journalists on the front lines of struggle so that we know what is happening behind news blackouts & repression. We cannot allow propagandists & washed up Islamophobes & blowhards to replace the courageous work of reputable journalists.

The Zionist group J Street say “It’s time for President Trump & Prime Minister Netanyahu to come to the two-state table.” Really? Those damn fools have brain rot from their racist ideology. A halfwit with family investments in Israeli settlements & a criminal presiding over apartheid & ethnic cleansing should decide the fate of Palestinians who they’re already bombing, shooting down, & jailing?

It is Palestinians who will decide their fate & they concluded long ago in 1948 that Zionist colonialism has to go. Historically they have called for a democratic secular state where Palestinians & Jews can live as equals, as brothers & sisters. Israel & the US have no rights whatsoever over Palestine. 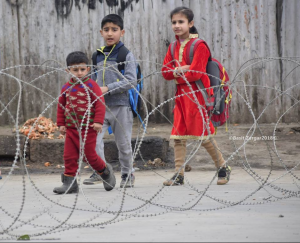 “Kashmiri children walk near a barbed wire during restrictions in many areas of Srinagar in view of a strike call issued by the joint resistance leadership (JRL) against the civilian killings in Shopian district on Sunday.”

Imagine placing razor wire in the public streets where children pass, jostle one another, run! Such is the insanity of military occupation. 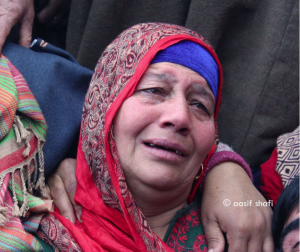 As this article in Kashmir Life points out, what happened at Shopian, the full story of the massacre of six civilians traveling in different cars, the execution of two militants, & the possible forced disappearance of others is not yet fully understood. Partially because the army version doesn’t have an ounce of credibility but mainly because there weren’t enough local witnesses to the slaughter since it happened at 8:00 at night.

There is a credible account according to local sources which is not mentioned in this article. It explains that eight, not six, civilians were murdered by the army. They were local fruit businessmen working at local storage cold rooms to pack apples & were traveling late night back to their respective homes. While nearing an army camp, the occupying forces indiscriminately fired on the first vehicle, killing five, & then fired on a following vehicle, killing three. The occupying army attempted to portray them as Over Ground Workers (OGW) & resistance fighters to justify the extrajudicial executions of unarmed civilians. Compare this to the army version elaborated in this article where fruit workers & businessmen are morphed into gunmen. It still isn’t entirely clear how the two resistance fighters were murdered. The massacre of civilians may have been part of covering up those crimes.

This article is useful, not for its elaboration of the confusion, but because it describes something about who the executed young men were. They were beloved family members & friends whose lives were cut short by professional butchers & thugs. A complete strike shutdown is going on in Shopian to protest the massacre. It’s likely Kashmiri human rights activists will be investigating & we will eventually learn what happened & exactly how many died. But we know enough already about the barbaric & violent character of the Indian military occupation to stand with Kashmiris & to demand the end of the occupation & self-determination for Kashmir. 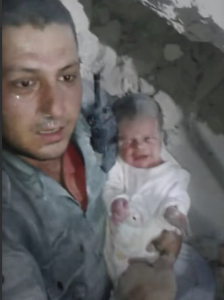 The While Helmet rescue workers announced that Khaled Harah, the main character in “Last Men in Aleppo,” the film about their work nominated for an Oscar award, was killed during the filming & that 223 other volunteers have also been killed in the line of duty.

We should take a moment to honor their lives & their contributions to the Syrian revolution & to human freedom. May they Rest In Peace. Their honor will live forever. What happens to their detractors & the hacks who support dictatorship & bombing of civilians is of no concern to those who stand with justice.