Now that the CIA kidnapping & torture operation has come up again, it’s worth mentioning that of the 54 countries which cooperated, Syria was widely known as the preferred destination for torture–or what they delicately called “coercive interrogation techniques.” That’s what makes the Amnesty & other reports on torture in Assad’s gulag so believable. 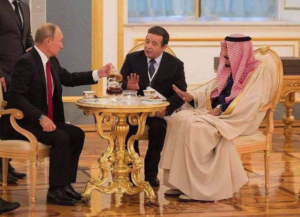 “When Putin offers you tea.”

(Putin with translator & Salman of Saudi Arabia at Kremlin)

The Southern Poverty Law Center (SPLC) is considered by many as an unimpeachable source on US hate groups. But many of us disagree with their lists, bans, determinations, & methods. That is particularly so after they spent a month privately training Israeli lawyer Nitsana Darshan-Leitner who founded the Shurat HaDin law center in 2003. Shurat HaDin is a law firm associated with the Israeli government which engages in “lawfare,” i.e., bringing suits on behalf of “terror victims” against “Islamic & Arab groups engaged in terror attacks.” It’s primary political goal is to destroy BDS groups through tying them up in litigation using methods learned from SPLC.

On March 9th, SPLC published an article titled “The multipolar spin: how fascists operationalize left-wing resentment” by a university lecturer named Alexander Reid Ross. The next day they withdrew the article after complaints by Assadist Max Blumenthal because it impugns him & his fascist political associations. What the article addresses in a labyrinth of organizational maps & accusations is the seemingly peculiar amalgam between antiwar activists, “retired” CIA, FBI, & Pentagon officials, sectarian socialists, Stalinists, libertarians, anti-Semites, Islamophobes, & Assadists & other fascists which most dramatically manifest on the issue of Syria.

The article lucidly lays out the associations but attributes the problem to fascist interference into progressive but sectarian political circles. There’s no doubt that progressives, especially the social climbers & careerists like Blumenthal, are being played by fascist & Assadist propagandists. But the profound degeneration in progressive politics has been going on since at least the end of the Vietnam War in 1975 & can be said to originate in the isolation of the McCarthy witch-hunt when the left attracted too many social misfits & crackpots. There never has been a political analysis of this degeneration because of the rift which prevails between theory & practice.

It’s useful to read the article though it should not be read as the gospel truth without vetting the accusations the author makes. It’s useful but accusations do not replace analysis about what the hell happened that in 2018 people who call themselves socialists & antiwar activists are marching in lockstep with dictators, CIA agents, & fascists. Analysis is necessary because this grotesque amalgam is engaged in discrediting struggles against war, occupation, & genocide in Syria, Palestine, Kashmir, Burma, Afghanistan, the Philippines, & wherever the hatred of Muslims can be used as a weapon against freedom.

Trying to set up Roku, I outsmarted myself & lost my entire browsing history so that I’m locked out of my blog. In searching for how to reclaim the info I learned that some agency is tracking my blog & that I am ranked 2,853,599 in the world (though I once reached 1,801,199) & 422,589 in the US with 518 readers a day & half-a-star approval. To increase my stature in the world I will be shifting political positions to that of a groveler. Kissing the ass of power is my only way to fame & fortune. 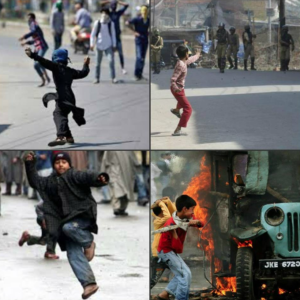 Kashmir’s littlest stone pelters: a nationalist posted this collage as “the other side of the story” to justify the use of pellet guns by Indian troops. Hundreds of young stone pelters are arrested in Kashmir. One sees the same thing in Palestine where Israel can incarcerate a child stone pelter for up to 20 years. Most of them are working class kids. Ahed Tamimi, who remains in prison, began resisting occupation as a small girl & is one of thousands of Palestinian & Kashmiri children robbed of childhood by military occupation & colonialism.

There have been moralist halfwits who denounce Kashmiri or Palestinian parents for allowing their children free to engage in resistance politics. Perhaps it isn’t fair to call them moralist halfwits so much as profoundly ignorant of what military occupation & genocide are all about. Children go about their daily lives or have their lives circumscribed by the presence of soldiers & paramilitary forces engaged in frisking, intimidation, & harassment, hunt to kill operations, forcible disappearances & arbitrary arrests of their family members, friends, & neighbors. Does anyone actually think one can keep children from rebelling when there is something about the very nature of a child that bristles at injustice & oppression? It is the child’s insistence on dignity & freedom that bring them into the streets against armed troops.

Those who stand for human rights look at this collage & feel outrage not at the children, nor certainly justification for pellet guns, but outrage & grief for children denied childhood & forced to fight for their very right to exist as free human beings. 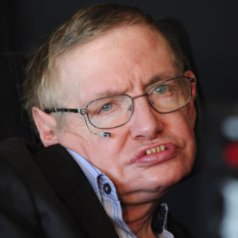 Physicist Stephen Hawking died today in Cambridge at the age of 76. Mostly he will be eulogized for his brilliance & contributions to science; those who knew him will describe the richness of his character. But we should honor him for respecting the cultural & academic boycott of Israel (BDS) in 2013 by publicly refusing to attend the Israeli Presidential Conference at Hebrew University in Jerusalem under the auspices of Shimon Peres. Peres (now dead) from Poland, was part of the Zionist paramilitary squads that forced Palestinians off their lands in 1948, was an architect of Israeli apartheid, & in 2013 was president of Israel; Hebrew University is built on illegally annexed Palestinian land; & Israeli universities & academics develop the psychological & technological systems used to suppress the Palestinian struggle against occupation, apartheid, ethnic cleansing, including the bombing of civilians in Gaza.

“Kashmiris fighting the occupation may derive their motivation and inspiration from varied sources, some commendable and some potentially disastrous, but the gun which kills Kashmiris is One, it is the Indian gun, and it does not differentiate between them. It is the Indian gun which is the source of all problems in Kashmir and this gun needs to go; we are more than capable of dealing with our disagreements in absence of this gun. #GoIndiaGoBack”

Trump’s new CIA head Gina Haspel ran a secret CIA prison in Thailand where ‘suspected terrorists’ were waterboarded. One suspect was waterboarded 83 times in one month. She also oversaw an interrogation program where suspects were deprived of sleep & stuffed into coffins–straight out of the CIA torture manual.

Now consider that her former colleagues run the corrupted US antiwar movement. And weep. A new antiwar movement must be built without any such odious connections. Psycho-girl needs to be prosecuted for crimes against humanity. 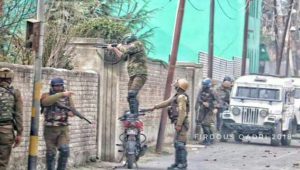 Did you ever see any recklessness quite like this? The guy is shooting a pellet gun! Apparently what or who he hits is all the same to him. But not to them. 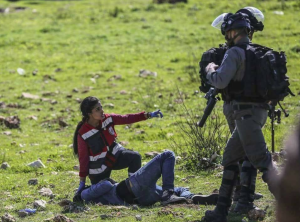 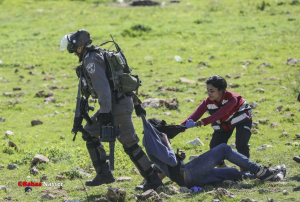 A young Palestinian first aid volunteer trying to protect an injured young man from Israeli soldiers: such is the toughness of Intifada.