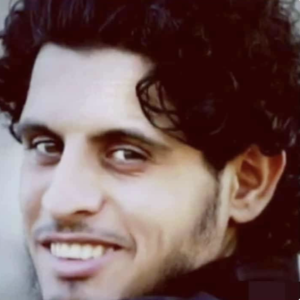 To discredit him as an “al-Qaeda affiliated Salafi-jihadi terrorist,” Assadists put up a video of Abdul Baset al-Sarout (killed by Syrian forces last Saturday) leading chants at the Arab Spring protests proclaiming “we are all jihadis.” The so-called ‘war on terror’ which Assadists completely support has twisted popular understanding of what jihad & jihadi mean in the Quran. It does not refer to holy wars or terrorists but to the religious & ethical struggles to promote what is right & prevent what is wrong. In that Islamic regard, Abdul Baset al-Sarout was a true jihadi & Assadists are still Islamophobic & anti-Semitic dirt balls who support dictatorship, gulags, & counterrevolution against the Syrian Arab Spring uprising. Would that we could all be jihadis. 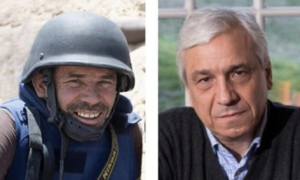 Tomorrow the Irish Syria Solidarity Movement & Peace Studies Trinity College in Dublin will sponsor a talk with Paul Conroy, the journalist wounded with Marie Colvin when she was killed by Syrian forces, & Yassin Al Haj Saleh, the influential writer who spent 16 years in the Syrian gulag & has written cogently about the Syrian revolution.

Some may think my objections to Facebook censorship at odds with my autocratic control over my own wall. The way I see it, people can spew whatever kind of political swill they want elsewhere on Facebook but not here. I cannot afford the services of an exorcist to clear out the toxic miasma left by Assadists, Zionists, fascists, anti-Semites, Islamophobes, Hindutvas. I stay away from commenting on their walls & I expect them to stay away from me. Amen.

A vignette of daily life from the occupation of Kashmir: 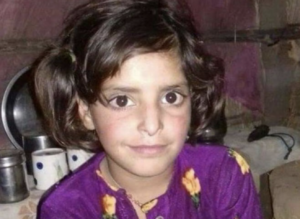 A verdict has been returned in the trial referred to by most media as ‘the Kathua case’, a regrettable tag which has a way of distancing us from 8-year-old Asifa Bano who was kidnapped, held hostage in a Hindu temple, sedated for four days, repeatedly gang raped by grown men, & then bludgeoned to death. The chief priest of the temple where the crimes were committed, a police officer, & another lowlife were sentenced to life in prison for criminal conspiracy, murder, kidnapping, gang rape, destruction of evidence, & drugging the little girl. Three other defendants, all police officers, were convicted for destruction of evidence in the crime & sentenced to five-years although they were accused of involvement in planning the crimes. A seventh defendant who is a juvenile was acquitted although he was also accused of rape & murder.

Asifa’s parents Muhammad Yusuf Pujwala & Naseema Bibi are members of a religiously Muslim oppressed caste living in Hindu-majority Jammu. This savage crime against little Asifa was a deeply personal violation of her humanity but it was also a political crime involving gender, ethnic, religious, caste, & class oppression in the same way as the lynchings of Blacks in the US South were personal & political oppression. The family & community have not received even the semblance of justice in this verdict.

Many are expressing outrage over the verdict & the defense will be appealing the verdicts because the brutes were not sentenced to death. All seven should certainly be sentenced to life in prison without the possibility of parole but even in the case of such unspeakable violence against a child, the death penalty remains a weapon of the oppressors & not a suitable form of justice for the oppressed. There is no possible justice for the monstrous crimes committed against this little girl or for her family & community. Bloodlust doesn’t cut it. To address justice, we must commit ourselves to active solidarity with the struggles against gender, ethnic, religious, caste, & class oppression, & to the struggles against Hindutva nationalism & the military occupation of Jammu & Kashmir.

May little Asifa Rest In Peace although justice is not yet forthcoming. 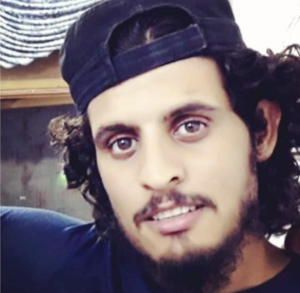 We should take a moment to honor 27-year-old Abdul Baset al-Sarout, a Syrian soccer star from Homs who became known as the “singer of the revolution” for leading rallies as part of the Arab Spring uprising in 2011. He led a unit of fighters against Syrian regime forces & was killed in a battle with them last Saturday in Hama province. Four of his brothers & his father were killed in earlier battles with regime forces.

This courageous young idealist is who Assadists vilify as an “al-Qaeda affiliated Salafi-jihadi terrorist.” We honor him for representing the highest ideals of human freedom from dictatorship, inequality, & violence. May his noble spirit Rest In Peace. 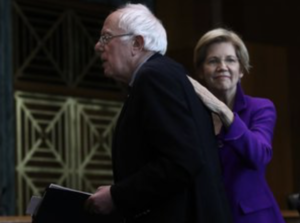 We can already hear the calls for beatifying Sanders & Warren for their grandstanding, election year stunt of introducing a non-binding resolution in the US Senate supporting a two-state solution & against Israeli annexation of any parts of the West Bank. But what a stinking, unimpressive resolution it is warranting scorn more than praise:

“Jeopardize” the bantustate solution? Do they mean the one already dead in the water from provisions of the Oslo Accords? “Harm Israel’s relationship with its Arab neighbors”? Do they mean the autocratic regimes long since bought off (in the Camp David Accords) by US military equipment to keep down their own citizens? “Threaten Israel’s Jewish & democratic identity”? Really!? Sanders & Warren, the vaunted champions of US democracy, accept the validity of a colonial, apartheid, theocratic Israeli state? “Undermine Israel’s security”? Do they mean those unarmed protesters in Gaza getting shot at by Israeli snipers or protesters in the West Bank standing against the razing of whole villages by Israeli bulldozers are a threat to Israel’s security?

You can’t have it both ways in politics, not even in election year showboating. Either you stand unequivocally with the Palestinian struggle against colonialism, apartheid, genocide or you come up with drivel like this resolution that makes an ass out of all who support it. 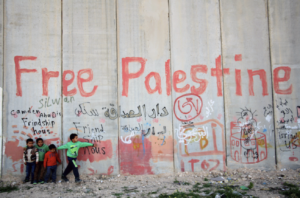 Actually, a bantustate solution, beside being completely unsustainable, would preclude the possibility that millions of Palestinian refugees could return to their homeland. The right of return, held sacred by Palestinians, is a central demand of the Great Return Marches. It is a right for which hundreds of Palestinians in Gaza have been killed & thousands injured, including with amputations & other disabilities.

If Sanders were truly committed to Palestinian justice, he would support the right of return for Palestinian refugees. He would end his opposition to BDS & start campaigning against the attempts to outlaw BDS that now prevail in several US states. Sanders should not be allowed to play both sides of the street & get called a champion of the Palestinians. Neither should Philip Weiss be allowed to water down self-determination for Palestinians because of his commitment to ‘lesser evil’ in US politics.

This 2014 photo of Palestinian children on the Jerusalem side of the apartheid wall near the village of Abu Dis is from a March 6, 2019 Mondoweiss article by Helena Cobban titled “The two-state solution is dead. Let’s start planning for the one state.” 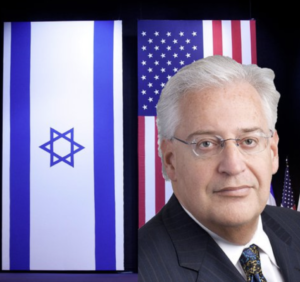 US ambassador to Israel David M. Friedman said Israel has a right to annex parts of the West Bank after Netanyahu threatened to do so. So-called liberal Zionists like J Street are up in arms because such an assertion of colonial rights against Palestinians exposes the fraudulence of the bantustate solution for Palestinians, something US policy & liberal Zionists have always used to mask their support for colonialism, apartheid, & a Jewish-only state. But annexing the West Bank is the logic of the Oslo Accords which legitimize occupation & expropriation of Palestine.

Ambassadors don’t make policy. Friedman is voicing & executing US policy formulated by the White House, the State Department, & the Pentagon. He was chosen to be ambassador because US policy toward Palestinians is no longer hiding behind the bantustate charade. The policy shift to more open aggression is most likely in response to increasing international support for Palestinians, opposition to Israeli genocide, & US & Israeli fear of the tsunamic force of the Arab Spring uprisings.

Friedman was a bankruptcy lawyer with no more knowledge of diplomacy or politics than real estate agent Jared Kushner who Trump put in charge of the treacherous US-brokered peace process that created the Oslo Accords. Their rabid uncompromising Zionism makes them appropriate for the aggressive shift in US policy toward Palestinians. Kushner’s real estate company has millions of dollars of financial ties to & investments in Israel, including in the West Bank settlements. Friedman, who has long openly opposed a bantustate solution, serves as a volunteer president to raise money for the nationalist Beit El settlement near Ramallah. A school in that settlement is named after his Zionist father who was an ardent advocate for the settler movement. His daughter is a settler in the West Bank in one of the 131 Zionist settlements which Netanyahu will be trying to annex.

In response to more aggressive US policy toward Palestinians, we must more consistently & more massively organize international opposition to stand with Palestinians against colonialism, apartheid, & genocide.

(Montage of Friedman from the Forward) 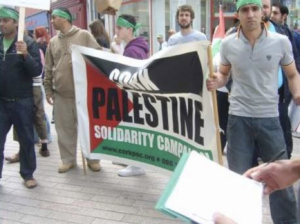 Reposting this fringe June 8, 2014 on the character of international solidarity since it has been so much maligned as noblesse oblige when it is in fact the iron law of social transformation.

You wouldn’t think there’d be much dispute about what solidarity is but in fact there is–or at least there is confusion. For those who want to change the world, “an injury to one is an injury to all” isn’t a sentimental or ceremonial mantra but an iron law of social change.
Somehow, in an attempt by some to thwart the appeal of socialist ideals, solidarity became identified as an act of white supremacy, the noblesse oblige of privilege. Some of that discredit is due to political chicanery by those who prefer capitalism since conformity can be a lucrative career move. But also implicated in the confusion is the “mismanagement” of those ideals by some socialists who have made solidarity an expedience–or much worse, the pivot of betrayal. Mismanagement is the politic word for treachery.

Solidarity is not an act of supremacy; nor is it not an expression of sympathy or, heaven forbid, pity. Nor is it negotiable. We don’t express solidarity with sweat shop workers, immigrants, homeless, unemployed, starving, & those millions fighting tyranny & austerity because we feel sorry for them because they’re the “underdog.” Solidarity has more muscle than mere weepy-eyed sentimentality. It means we recognize our connections with others in a complex, international nexus of economic, social, historic, & political bonds. Our fate is inextricable from that of all others.

Neoliberalism, the barbaric phase of capitalism, tries to sever those bonds by creating competition between working people from Asia to Africa to Europe to the Americas. Racism is central to that competition & the rancid, hateful howlings of that ideology change little from one continent to the next.

We render solidarity–of the muscly hard-nosed kind–because of our common humanity, because we are committed to the ideal that all human beings are equal, & because one consequence of neoliberal globalization is making working people around the world completely dependent on each other for justice & emancipation.

This photo of a 2010 protest in Cork, Ireland in solidarity with Palestinians is repeated thousands of times at thousands of protests around the world to support those being targeted by tyranny. These protests represent humanities highest aspiration: solidarity. Someday it will represent our highest achievement. Solidarity forever!