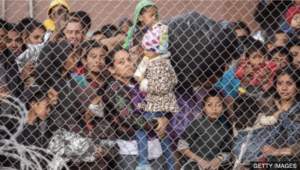 Acting Homeland Security Secretary Kevin McAleenan told a US Senate hearing that 60,000 child refugees–both unaccompanied & kidnapped from their families–were arrested at the US-Mexico border & stuffed into concentration camps just between April 25th & June 11th. There were already thousands being held & thousands arrested since.

Trump’s officials, including from immigration agencies, the Justice Department, Homeland Security, Health & Human Services are all defending these camps & promoting his racist, xenophobic, & pathologically nationalist ‘zero-tolerance’ policy. We should not for one moment forget that Trump’s policies are US policy. He remains in office despite overwhelming evidence that he is deranged & stupid because he so well serves the extreme right-wing section of the capitalist class which now dominates US politics.

These are refugees at one of the now notorious El Paso, Texas concentration camps.