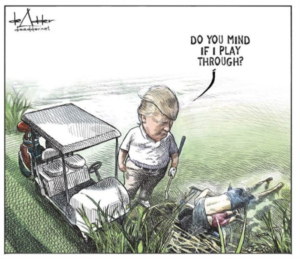 Trump’s barbaric policies toward refugees are US policy. But this political cartoon captures the amorality of the US concentration camp guard-in-chief. Just two days ago, Trump’s top immigration official Ken Cuccinelli actually blamed Salvadoran father Óscar Alberto Martínez Ramírez for his own drowning & that of his 23-month-old daughter Valeria. Cuccinelli told an interviewer that Martinez drowned because “that father didn’t want to wait to go through the asylum process in the legal fashion, so decided to cross the river.” In fact, even if Óscar Ramirez had waited outside in sweltering temperatures in lines that go on for nearly a mile, it is most likely his application for asylum would have been denied.

Michael de Adder who did this political cartoon highlighting the amorality of Trump’s immigration & refugee policies was fired for it by his employer the Brunswick News in New Brunswick, Canada & they refused to publish it. It has since gone viral.

Open the borders. Immigration & asylum for refugees is a human right.