Considering the US-NATO war against Afghanistan when Islamophobia was first used in a major way to justify bombing civilians, it is absolutely odious to antiwar & Muslim feminists that feminist ideas were incorporated as fundamental to Islamophobia & that establishment feminists were marshaled to promote it. Any compromise on war debases feminism & threatens the liberation struggles of women. The whole scam is to justify war, occupation, persecution, genocide & at the same time discredit & destroy feminism. If you don’t get that, take up basket weaving & leave politics alone.

It isn’t just his smarminess that makes Justin Trudeau such an ideal target for ridicule. It’s that in effect he has the same politics as Trump, Modi, Duterte, Suu Kyi, Assad, & Putin & all the other bums but tries to pretend he’s the second coming of Jesus. 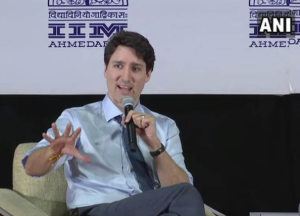 While in India, Justin Trudeau declared himself a feminist. Will someone please tell that puke that you cannot sell arms to Saudi Arabia which is bombing Yemen, support the bombing of Gaza & the apartheid state of Israel, or support the Rohingya genocide even in a backhanded way & call yourself a feminist? Are not Yemenis, Palestinians, Rohingya women too? Isn’t feminism a liberation ideology quite distinct from war criminality?

Photo is the pompous ass pontificating to students in India. 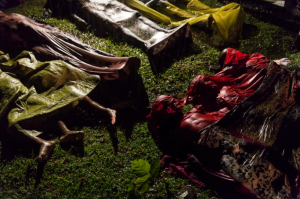 This unbearably gruesome photo is the bodies of Rohingya refugees laid out on a beach near Cox’s Bazar, Bangladesh on September 28, 2017. There were only 17 survivors on a boat carrying about 100 people which capsized trying to flee to Bangladesh. The photo is one of the six finalists for the 2017 World Press Photo of the Year award.

It is not possible to speak of forcible repatriation whilst Rohingya continue to cross into Bangladesh fleeing genocide in Arakan/Rakhine state. No decisions can be made about their futures without their direct participation. They are not pawns in some high-stakes geopolitical negotiation. They are a people in the crucibles of genocide.

There is increasing talk of turning Arakan state into an autonomous region so that Rohingya refugees can return safely. There are billions of dollars invested in ‘development’ projects in Arakan, particularly, but not only, the Chinese oil & gas pipelines from offshore wells directly to China. It is highly unlikely, if not absolutely excluded, that China, other countries, & Burma will agree to transfer those assets to the Rohingya people. You cannot have an autonomous territory unless you can control the infrastructures of the economy. But the most compelling reason autonomy is not advisable is that Burma has a high-tech military that will not respect autonomy while the Rohingya people have no military to defend them from genocide by war & other means, including nationalist Buddhist death squads within Arakan state. How would they defend themselves when China, Russia, Israel, India are arming Burma? Who would sell them arms? Would they be forced to become an unarmed military encampment to fend off death squads within Arakan & the Burmese army at the borders? Would autonomy mean they would be safe or that they would be just as unsafe as if they were forcibly deported to the killing fields they fled? That is for the Rohingya people to decide.

(Photo by Patrick Brown for UNICEF)

There’s a fellow from Canada who once argued on my wall that there are two sides to the occupation of Kashmir. Now he’s arguing there are two sides to the US occupation & bombing of Afghanistan. Stupid is international. There’s always somebody somewhere who won’t side unequivocally with the oppressed because it doesn’t pay that well & you’re not welcome in elite circles. Fox News will never ask for your opinion. The majority of humanity are a different kind of person & the heart & soul of social transformation.

Despite the weakness & corruption of the US antiwar movement, the majority of Americans have long opposed US wars, including in Afghanistan. We have to rebuild the antiwar movement in the US & internationally with that in mind. There is nothing more imperative. War, occupation, genocide are not just issues on a par with other demanding social issues but are preeminent. We can integrate all other social issues into protests in solidarity with those in the crucibles of war, occupation, genocide. Such are the highest traditions of antiwar protest around the world. 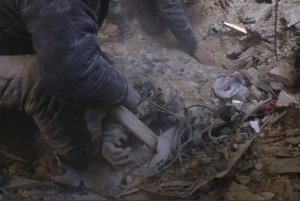 It’s one thing for professional propagandists like Eva Bartlett & Vanessa Beeley to write panegyrics to Assad & the Syrian army. They get paid big bucks to do so. Fascist political circles are their natural habitat. But it’s another story altogether when long-time antiwar activists & erstwhile socialists like Jeff Mackler from Socialist Action write the same rubbish honoring the Assad dictatorship & crowing about how Syria & its military allies are defending Syria’s self-determination against US imperialism. Unconcerned about his political associations with dictatorship, Islamophobia, anti-Semitism, & fascism, he wrote a nearly 1,500 word article of Assad apologetics without one word about the massive bombing of civilians by Syria, Russia, or the US coalition. Antiwar activists & socialists like him are rotted to the core, beyond political redemption, when they engage only with power politics & not with the human toll of war.

There was a time I grieved at the political corruption former allies express. But grief has long since been replaced with outrage at their betrayals of antiwar principles, betrayals that have made the US antiwar movement complicit in aiding & abetting counterrevolution in Syria. May they rot in hell. The historic mission now is to rebuild the international antiwar movement on the principles of solidarity & anti-militarism.

Photo is the aftermath of Syrian & Russian bombing in Ghouta. Rescue workers are trying to recover bodies from the rubble. 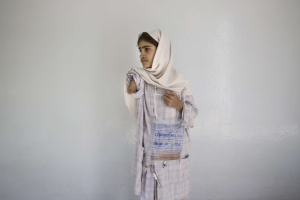 A little Afghan girl who lost her arm, but fortunately not her life, in a land mine explosion. Wonder if she can feel all the solidarity going her way from Democratic Party feminists (including Gloria Steinem) who supported the US-NATO war as a way to emancipate women from Islamic fundamentalism? Wonder if she appreciates all the war-mongering & Islamophobia used to justify bombing, occupation, war crimes? Probably not. That would be an understatement & a condemnation.

Those women around the world who stand with the Afghan people against war must make our voices heard loud & clear: no US-NATO war in Afghanistan. War is a women’s rights issue.

Our fullest solidarity with the men, women, & children of Afghanistan. Out now! 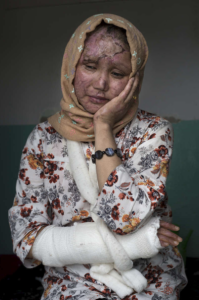 The US-NATO war in Afghanistan has gone on for over 16 years & is now being called “the forgotten war” despite the US dropping the Mother of All Bombs (MOAB), the largest non-nuclear bomb in its arsenal, last April & despite US deployment of 5,000 more troops just in the past few months. Last year, the US admitted to 11,000 troops in Afghanistan but even the NY Times called the Pentagon out for lying. They don’t include all of the troops nor the CIA operatives & the thousands of mercenaries they deploy.

The war which was launched after 9/11/2001 was originally justified by the hunt for Osama bin Laden who they claimed was holed up in a cave with his dialysis machine. Then they claimed it was to liberate women from Islamic fundamentalism by bombing the hell out of schools, fields, mosques, hospitals, villages, & dropping land mines by the hundreds of thousands. For evidence of that obscenity they pointed to a beauty parlor in Kabul where women could get their nails done for the funerals of their loved ones who were bombed to death or killed by a land mine. The Pentagon won’t deal with the issue of sexual assault within the US military but had the temerity to claim it gave a damn about Afghan women. It was the first major use of Islamophobia combined with misogyny as a propaganda tool to justify war, occupation, persecution, genocide.

The war has created millions of refugees & massive homelessness; child labor is rampant because their labor is needed for survival when adults have been killed; Afghan children suffer one of the highest malnutrition rates in the world; thousands have had limbs blown off by land mines; thousands are subjected to drone aerial bombings; war crimes are routine.

This is an Afghan woman with injuries sustained from war. This is what the US Pentagon dares call emancipation. We cannot let the war in Afghanistan be forgotten. It is a political imperative to rebuild the international antiwar movement on a principled basis that opposes occupation & the bombing of civilians & demands the immediate, unconditional withdrawal of all foreign armies, undercover operatives, & mercenaries.

We stand in full solidarity with the people of Afghanistan in their fight against US-NATO aggression.

Pellet gun victims in Kashmir lead campaign to end their use & receive compensation: