Trump claims immigration officials arrested 100,00 “criminal aliens” last year for “tens of thousands of crimes.” He’s talking through his ass again even though under his tenure the arrest of undocumented immigrants is up 900-percent in some areas. He also argues for immigration “based on merit,” which means rich, not working class immigrants. He then recited a poem comparing immigrants to snakes. Racism & xenophobia is the leitmotif of his stinking rotten politics. He does not represent the majority of Americans, nor certainly low wage white workers. He represents rich white supremacists. 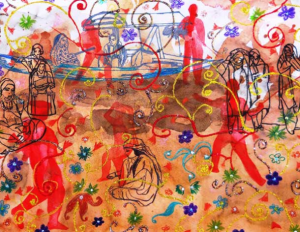 In commemoration of Kunan Poshpora, Kashmir mass rape & torture on February 23rd, 1991 as part of the campaign demanding justice:

Trump wants to arm teachers & train them as SWAT teams & is blaming “crazy people” for school shootings. He operates politically & personally from the level of primal slime & is incapable of thought. He is not the leadership Americans deserve but he is an expression of the political bankruptcy of American capitalism. 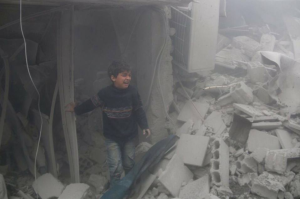 A terrified, crying boy standing in the rubble caused by Russian & Syrian carpet bombing of 400,000 civilians in Eastern Ghouta, Syria:

Fares Shehabi, the Assadist politician who presided over the capture of eastern Aleppo in December 2016, mocks this boy, the White Helmet rescue workers, & those being treated in hospital for injuries & dismemberments as all Hollywood actors. That the US under Trump & UN officials condemn this slaughter does not signify they are on the side of Syrian revolutionists. Assad has a price to pay to the US & its other allies for their military involvement in the counterrevolution & that price is coming due. It’s a messy alliance & a ruthless operation. The US doesn’t care any more about the civilians of Eastern Ghouta than it did about those in Raqqa, Syria & Mosul, Iraq where it carpet bombed hundreds of thousands of civilians in the name of fighting ISIS.

Stand with the Syrian people & demand the immediate cessation of Syrian, Russian, & US coalition bombing & the immediate, unconditional withdrawal of all foreign military forces from Syria.