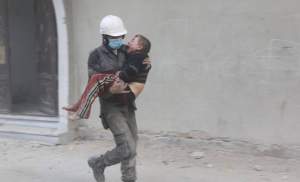 It is not gratuitous or politically factional to object to the authority & leadership “retired” CIA & FBI agents & former US State Department & military officers have in the corrupted antiwar movement. The most prominent among them are Ray McGovern (CIA), Ann Wright (US Army colonel & State Department official), & Colleen Rowley (FBI). They are all of the 1960s political generation but instead of joining with the millions protesting US wars, beginning with the Vietnam War, they committed their lives to working in service to the Pentagon. It wasn’t until retirement & the Iraq War in 2003 that they found their souls & transubstantiated into leading voices of a weak & fractured antiwar movement.

Let me say, in the interests of full disclosure, that Colleen Rowley is the FBI agent who by her own admission to me flagged my criminal record for using a Weapon of Mass Destruction in 2000, just a few years before morphing into a leader of those she had previously been spying on. In 2009, she was unwilling to lift a finger to get that removed from my record, making me unable to get jobs requiring a security clearance.

Transformation & political change are possible at any age so it could be just coincidence that their pensions were secure before they did their morphing. But the problem is that they haven’t changed from their Pentagon days. Now they are ardently promoting Assad & Putin & have helped corrupt the US antiwar movement by supporting Syrian & Russian bombing of civilians. They’re on the same side as the US when it comes to counterrevolution in Syria, regardless of their new anti-imperialist rhetoric. They advance conspiracy theories in place of political analyses & promote the writings & speak on panels & platforms with outright fascists. It was McGovern who admitted in a 2004 interview with Mother Jones that their group Veteran Intelligence Professionals for Sanity collaborates with “virtually all the agencies,” including “very distinguished operations officers, & from the FBI, Defense Intelligence, from the NSA, Army Intelligence, & from the State Department.” So the question emerges: just how independent are these “retirees” from the US Pentagon?

If each has nearly 50 years of working, spying, & doing analyses for the Pentagon, why did it take till 2003 to oppose the many US wars millions of Americans have been marching against since 1965? What was it about the barbarism of the Iraq War that snapped for them when Vietnam, Granada, Panama, Nicaragua, Afghanistan, Somalia, & all the other barbarous wars went right over their heads? Just asking for a friend–that little boy being rescued by a White Helmet in Afrin City where Syrian & Russian bombs are “falling like rain.” 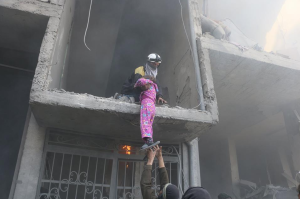 A White Helmet rescue worker lowers a small girl in her pajamas to safety after Syrian bombers tore the face off her family home in an early morning bombing raid. It is reported that every single town in Eastern Ghouta is being bombed by Syrian & Russian bombers. In Idlib, it is reported that bombers are targeting hospitals, clinics, & ambulances.

While White Helmets risk & lose their lives rescuing people in the bombing raids, Russian & Syrian media along with professional propagandists & corrupt antiwar activists are vilifying the rescue workers as al-Qaeda (al-Nusra) operatives planning a chemical weapon “provocation” using chlorine gas. Assad’s best defense is an offense accusing rescue workers of the war crimes routine for the Syrian military. There’s a simple measure for cutting through the propaganda & confusions: those who drop the bombs are the war criminals; those who rescue civilians are the freedom fighters.

The international antiwar movement must be rebuilt without compromise demanding the immediate cessation of Syrian, Russian, & US coalition bombing of civilians & the immediate, unconditional withdrawal of all foreign military forces from Syria.

This is a boy in Eastern Ghouta today where Syrian & Russian bombs “are falling like rain.” Thousands have been forced to live underground to escape shelling & an estimated 190 people have died since Sunday night, according to the Syrian Observatory for Human Rights. Syria & Russia are laying siege to a civilian population with bombers, helicopter gunships, missiles, & artillery.

The corrupted US antiwar movement led by “retired” CIA, FBI, & military officers claims the bombing of civilians is necessary to defend Assad’s “self-determination” & heralds the Syrian Army as freedom fighters. Syrian children weep at such monstrous betrayal of principles.

The only principled demands are the immediate cessation of Syrian, Russian, & US coalition bombing of civilians & the immediate, unconditional withdrawal of all foreign military forces–overt, covert, & mercenary–from Syria. 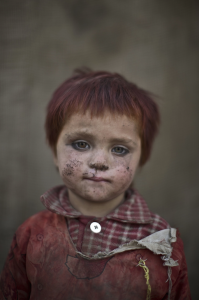 This little Afghan war refugee in Pakistan is who you think of when you read about the US sending more troops or dropping the Mother of All Bombs on Afghanistan. There is no other side to war, occupation, genocide.

(Photo by Muhammed Muheisen from 2014)