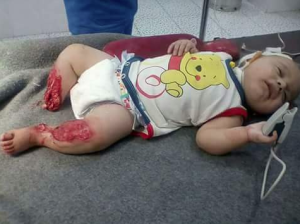 This is 2-month-old Omar Quwaidar who lost his right leg in Syrian/Russian airstrikes over Arbin, Syria near Damascus. His two-year-old sister Batoul was operated on for brain injuries sustained in the same airstrike. It hasn’t been reported if she survived.

In your opinion, does defense of Assad’s national sovereignty justify the carpet bombing of civilians & the massive suffering of children–even if he weren’t a monstrous dictator?

Stand with the children of Syria & demand the immediate cessation of Syrian, Russian, & US coalition bombing & the immediate, unconditional withdrawal of all foreign military forces from Syria. 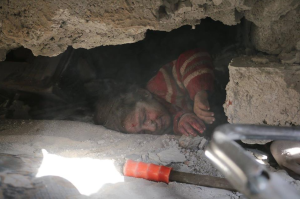 Russian bombing in eastern Ghouta caused a building to collapse & bury civilian residents under the rubble. Eight were rescued alive. There is no report on the number who died or are still buried under rubble. It isn’t reported whether this child survived or not.

Those who glorify Russia’s role in Syria & support Syrian, Russian, or US coalition bombing of civilians should hang their heads in shame. Do they really dare argue that protecting Assad’s national sovereignty to arrest, torture, disappear, execute political dissidents, & carpet bomb civilians is a progressive, antiwar position? It is not too late to reclaim political principles & oppose the bombing of civilians by any military force. It is not too late to stand with the Syrian revolution against Assad’s dictatorship. 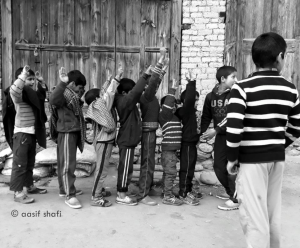 Kashmiri kids playing ‘frisk’, a game they invented after seeing the Indian army regularly stop civilians & submit them to this humiliating procedure. Frisking is routine practice under war & military occupation. It was done in Northern Ireland under British military occupation, Iraq under US occupation, is done selectively by Israel to those entering the country & to Palestinians under Israeli occupation, & of course elsewhere. It is an intrusive procedure & a violation of human rights. In Northern Ireland & Iraq, it was an issue that male soldiers would frisk the bodies of women civilians.

Stand with Kashmiris in demanding India end the occupation & self-determination for Kashmir.

Did I mention that the Bollywood propaganda film “Padmaavat” is in 3-D? So when the psycho Muslim-ISIS villain is coming at you, he is ten times the size & ferocity of the courtly but stupid Hindutva hero. There was no cinematic device not misused & turned into treachery in this piece of crap. If it weren’t for the violent political climate of Islamophobia, people would have been rolling in the aisles laughing at such an over-the-top catastrophe.

On the politics of Swedish Doctors for Human Rights:

Many have written about the role NGOs & human rights groups play in coopting the narratives about humanitarian needs & human rights demands to serve state power. Just the most egregious examples: there were 10,000 NGOs in Haiti after the 2010 earthquake with nothing to show for it, including the Red Cross which raised $500 million & only built six houses; Human Rights Watch refuses to condemn war but only elaborates less barbarous ways to conduct it; Amnesty International reported that Hamas war crimes were as responsible for Israel’s seven-week carpet bombing of Gaza in 2014 as Israel; the International Rescue Committee is a Kissinger operation run by Madeleine Albright, Colin Powell, Kofi Annan, Condoleezza Rice, & other such criminals. Shameful stuff.

That’s why you have to vet the politics of every so-called human rights group. It’s not that some of them don’t do important work–because they do–but that their politics are compromised by too close association with the power elite. Now extreme right & fascist forces have picked up on the value of using human rights for their front groups. One of the most notable of these is Swedish Doctors for Human Rights, a front group for Assad propagandists. If one vets the individuals involved, one will see they are doctors more of the Joseph Mengele than of the Benjamin Spock kind. Now they are using their dishonor to promote the Rohingya genocide as “fake news & massacre marketing.” If one stands on the wrong side of Syria & the Rohingya genocide, one is squarely in the camp of political reaction.