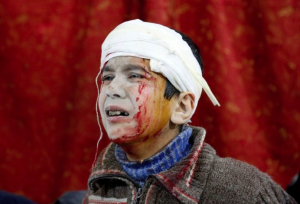 This is a boy in Eastern Ghouta today where Syrian & Russian bombs “are falling like rain.” Thousands have been forced to live underground to escape shelling & an estimated 190 people have died since Sunday night, according to the Syrian Observatory for Human Rights. Syria & Russia are laying siege to a civilian population with bombers, helicopter gunships, missiles, & artillery.

The corrupted US antiwar movement led by “retired” CIA, FBI, & military officers claims the bombing of civilians is necessary to defend Assad’s “self-determination” & heralds the Syrian Army as freedom fighters. Syrian children weep at such monstrous betrayal of principles.

The only principled demands are the immediate cessation of Syrian, Russian, & US coalition bombing of civilians & the immediate, unconditional withdrawal of all foreign military forces–overt, covert, & mercenary–from Syria.