So for a round-up of “anti-imperialist” experts denying Assad gassed civilians at Khan Sheikhoun:

Do observe that, with the exception of Putin’s spokesperson,  their transubstantiations from government spies & agents of war to “anti-imperialist” experts & leaders of the current degenerated & lilliputian antiwar movement was after their hefty pensions were well-secured.

If these are your experts, you might consider that you are being played.

Hiroyuki Hamada is an artist of some success, an ardent Assadist & admirer of Duterte for talking hard-ass to Obama. The death squads don’t bother him. My falling out with him came when he posted a vile misogynist caricature of Hillary Clinton which he defended as feminist critique & mansplained to me at exhaustive length.

Some people call it trolling to follow social media posts of those you disagree with. You don’t stalk but you’d be foolish not to follow what they say. Some also think it censorious to dump Assad supporters. But supporting Assad isn’t like a dispute over toothpaste brands. It involves all the most important issues of war, racism. & revolution against dictatorship & barbarism.

This is what Hamada reposted from another of his friend’s wall about the United airplane incident:

“The 3 big Blacks who manhandled the poor 69 year old Chinese doctor from Louisville, Kentucky were Chicago police officers…summoned by the Black manager of UAL to forcibly remove the fully-paid ticketed doctor with a confirmed seat.

The doctor had to be back in Louisville, Kentucky because he has patients scheduled to see on Monday morning.

He said so but was nonetheless manhandled and brutalized.

This is Chicago, the homicide capital of the U.S. exceeding Oakland…where the high-school drop-out rates in it’s public high schools exceed over 60%…mostly Blacks, and Latinos.
America has no standing to lecture Filipinos about human rights.”

With that outrageous racism against Blacks & Latinos, I rest my case for putting 6-degrees or more of separation between oneself & supporters of Assad, Duterte, & Trump.

According to media, Ivanka Trump brings a kinder, gentler approach to bombing other countries. Or as Shafali Darling put it a “more vapid emotional manipulation of the public using the “soft Ivanka as a mom” angle.”

Whoever suggested the bombing of the empty airport hangars was about making Trump presidential may have had a point. We know it had nothing to do with the gassing of civilians at Khan Sheikhoun. Mosul is the most current testimony to that. The US hit a couple rusting airplanes & the airport is fully operative today.

What makes this seem more about Trump’s image is media coverage trying to present him as a man who grew into the presidency combined with the shuffling & demotion of personnel like Steve Bannon & Kellyanne Conway.

The guy’s a lowbrow, loud-mouthed skunk with no morals, no ideology, precious little intelligence & that is twisted, & no abilities at anything except bullying. Not unlike a lot of other US presidents but at least they didn’t have a Twitter account. 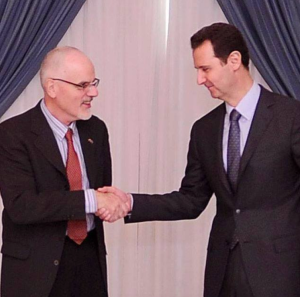 Discredited Australian professor Tim Anderson in a pas de deux with Bashar Assad: the dance is called “The Grovel” & it’s executed with a shuffle, a curtsey, & that fawning smirk Anderson displays here.

Assad executes his moves with a special adagio called the “sucker punch” dedicated to those who bend the knee to dictatorship & defend his crimes.

(Photo is Tim Anderson on left with Assad)

The United Airline story just gets worse & worse. Now they’re impugning the 69-year-old doctor for having a criminal past. Even if he was on the lam from police authorities, he was forcibly & violently removed not for those crimes but because they wanted to put an airline employee in his seat.

He is Asian ancestry & is claiming racism. Of course racism was involved in aggression on an airplane. It’s become a venue for the free expression of racism. 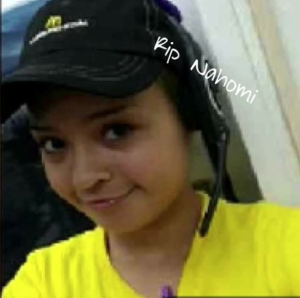 Nahomi Rodriquez, a 19-year-old woman, disappeared in July 2016 after her late shift at a McDonald’s in a town nearby here. Police just found her body dumped in a canal, the victim of homicide.

When women or children are kidnapped, disappeared, tortured, murdered, it is understood as personal crime, a matter of deranged sexual pathology. It is a political crime deriving from the oppression of women.

For every person who dies from violence, including murder, forcible disappearance, in the gulags of injustice & tyranny, suicide (often a political act against oppression), the world shifts a little on its axis & life is forever off-kilter for those who grieve.

Our condolences to the family of Nahomi. May she Rest In Peace. May the police hunt down the perpetrator & bring him to justice. 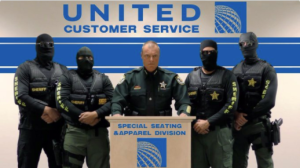 Call me a litigious American, but one hopes that doctor forcibly hauled off United airlines sues their ass off. They must have broken any number of tort laws with other outraged passengers providing video documentation. He also appears to have a bloodied face.

Like the Bowling Green massacre, social media is having a field day with this incident, not out of lack of sympathy with the man but out of outrage. United will not soon recover from this debacle.

Aung San Suu Kyi really ought to consider denying interviews to the BBC because the interviewers are no longer reverential as previously. As slick as she is in handling questions, her deference & outright collusion with the military junta in Myanmar stand exposed.
When she was interviewed in 2013 on BBC & asked pointed questions by news presenter Mishal Husain, Suu Kyi was outraged & lost her composure off-air, snapping “No one told me I was going to be interviewed by a Muslim.”

Last week, BBC correspondent Fergal Keane interviewed her with questions less pointed than accusatory: “Do you ever worry that you will be remembered as the champion of human rights, the Nobel laureate who failed to stand up to ethnic cleansing in her own country?” That’s when Suu Kyi outright denied ethnic cleansing in Arakan state & said Muslims are killing each other.

Keane also asked: “Do you think people in the west misjudged or mischaracterized you or misunderstood you, expecting you to be an amalgam of Mahatma Gandhi & Mother Teresa…& maybe you’re closer…to Margaret Thatcher?” Actually, if you dispense with the mythologies about Gandhi & Mother Teresa to assess their real politics, Suu Kyi has an affinity with all three of them. But the barb is well-taken.

One can blither on about MSM till the cows come home but Fergal Keane has done a marvelous job exposing the legend of Aung San Suu Kyi.

Everybody, from the far left to the far right–Assadists & libertarians, socialists & social democrats, Trump, Putin, & even Duterte supporters–are having a field day going after the liberals. In an era of alt-rights, alt-lefts, neocons, neo-liberals, & undefined other amalgams, who knows what the hell a liberal is? Is a liberal Maxine Waters? Hillary Clinton? Barack Obama? Noam Chomsky? Tariq Ali? John Pilger? Patrick Cockburn?

Or are the liberals those who marched against the Muslim ban, those who oppose Russia & Syrian bombing of civilians, not just US bombing (& vice versa), the ones who have always made up most of the social movements, who bankroll those movements & are out trying to make the world a better place?

Next time you attack the liberals with your hatchet could you take a moment to identify by name who it is we’re supposed to hate? No sense in wasting a precious commodity in such short supply. We all know there is never enough hate to go around in the world. The confusion is that liberal is starting to take on the perplexities of that Wahhabi/Salafi jihadi thing where nobody knows nothing except we’re supposed to hate them. Hating on cue is just so yesterday.