When this crazy Assadist crap first emerged not that many months ago, it was a period of grieving, of loss & separation, of fractured personal & political relationships. It seemed a devastation & political wreckage.

You get a closer look at who they are & what they think, the shabby hatreds lurking in their hearts, it isn’t wreckage any more but a recreation on solid foundations of solidarity. Every time you employ the block button to dispatch another, choruses of angels encircle you singing an up tempo rendition of that old classic tune “What the hell took you so long? Let’s boogie.”

Tariq Ali’s sole contribution to the momentous discussion about the gassing of civilians in Syria is a stupid meme from an Assadist denying Assad gassed civilians. The meme said “The government lied about Vietnam, Afghanistan, Iraq, & Libya. And you think they’re telling the truth about Syria?”

One stands in awe of such irresponsible imbecility. Or is it just indifference?

When I was a young working class socialist, a very privileged older socialist said to me that his indignation had waned with age. It seemed incomprehensible to me at 25. It still does at 72. Maybe that’s what happened to Ali. Maybe his indignation flew the coop. But then he should just stfu rather than post memes from trivial minds apologizing for dictatorship & the bombing of civilians.

Just days ago, Assadists thought they were approaching the end-game in Syria & began expressing concern about US partition plans. Partition is the quid pro quo for US involvement in the counter-revolution. Of course it should be opposed–not to protect Assad’s national sovereignty but to protect the revolution against Assad.

Khan Sheikhoun changes things. Assad stands exposed because they can’t even get their damn story straight. Syria says it didn’t gas civilians. Russia said Syria did bomb but gassed accidentally. The hired propagandists are all over the place. They aren’t looking at end-game anymore. They’re looking at a crisis for Assadism.

For those who think debating with Assadists can lead to breakthroughs in their cement heads, I received these two memes today:

Putin flipping me the bird was from an unknown Assadist who took umbrage at my criticisms but was at a loss for words because of diminished capacity.

The gorilla flipping one (or is he looking at his booger?) was from a friend (now former) after I removed an article he posted titled “Swedish Medical Association Says White Helmets Murdered Kids for Fake Gas Attack Videos” by Gordon Duff, a deranged libertarian who writes for SOTT the David Icke publication edited by Eva Bartlett.

See why I’m trigger-happy with the block button?

Netanyahu is shocked & outraged over Syria’s chemical attacks on civilians, especially on children. Does he think we’ve forgotten Gaza? The white phosphorus, the carpet bombing for weeks, the deliberate targeting of children?

How did Vijay Prashad come to be known as a hotshot intellectual on the left? The guy’s a long-winded putz who wrote a piece on Khan Sheikhoun that sounds just like Vanessa Beeley, Assad’s version of Hitler’s Leni Riefenstahl.

The only good thing you can say about him is that he will teach us not to defer, not to accept authorities without doing our own investigation.

That sound harsh? Not for a guy who tries to talk around the gassing of civilians. 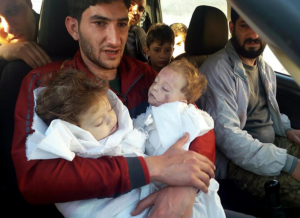 We need to stare this man’s loss & grief straight in the face to understand the enormity of Assad’s crimes at Khan Sheikhoun. Abdel Hameed Alyousef lost his 9-month-old twins Aya & Ahmed, who he’s holding here before burial, his wife, two brothers, nephews–altogether over 20 members of his family who were buried together in a mass grave.

Assadists, including Eva Bartlett, have the psychotic gaul to say this is a hoax: “If dead children are paraded in front of cameras, it does not show a chemical weapons attack. It is proof of murder, someone massacred these children & their families.” Beeley calls them “alleged attacks” & blithers on about fake news & the White Helmets. Tim Anderson said “bearded jihadis” kidnapped hundreds of Syrian children & murdered them. These propagandists are falling apart before our very eyes, coming up with competing “alternative facts” because even Syria & Russia can’t get their lies coordinated.

Leave the counter-revolutionary dirt-balls in the Hands Off Syria Coalition to scurry around like vermin looking for a story to whitewash Syrian war crimes. Our historic mission is to rebuild the international antiwar movement on a principled program demanding Syria, Russia, the US stop the bombing of civilians in Syria. US, Russia, & all foreign military operatives out of Syria.

We cannot bring back this man’s family nor allay his grief–nor make up for the epic failure to build international solidarity with the Syrian revolution against dictatorship. The only thing we can do is commit to rebuilding the antiwar movement so the Syrian people can finish off the Assad regime without impediment.

Our deepest condolences to Abdel Hameed Alyousef & to all who have paid such a horrific price for freedom.

There is serious flooding in Kashmir which requires reporting, partly because of the way India handled the last major flooding episode. Even natural catastrophes are impacted by military occupation.

Maybe Kashmiris could post what we need to know since events in Syria are prepossessing. It is not a lack of concern but only a matter of time. 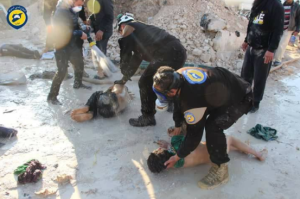 Assadists are dragging out 3-year-old news reports (from mainstream media, no less, which they consider the very fountainhead of deceits) claiming that in 2014 the Organization for the Prohibition of Chemical Weapons (OPCW) attested to the removal & destruction of Syria’s chemical weapons stockpiles. That’s true, but chlorine was not included in the chemical weapons ban & Assad continued to use it against civilians.

The OPCW investigative teams apparently had not shown due diligence–or at least were outsmarted by Assad forces hiding caches of chemical weapons–because since then OPCW reported traces of undeclared sarin & VX gas (another nerve agent) at a military facility in Syria & there have been several reports of chemical attacks by Assad bombers.

After the sarin gassing by Syrian bombers in Khan Sheikhoun, the OPCW today announced another fact-finding mission to Syria. They will be taking witness testimony & physical evidence for analysis. Meanwhile, Assad is free to continue chemical attacks with chlorine & has done so repeatedly according to doctors treating the victims & according to the reports of human rights organizations. 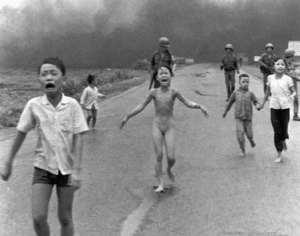 Vietnam War, June 8, 1972: US ally South Vietnam dropped bombs with a mixture of incendiary napalm & white phosphorus jelly on children fleeing from the bombing of their village in South Vietnam.

Phan Thanh Tam, the boy in the left foreground, lost an eye. His sister, 9-year-old Kim Phuc was naked from having her clothes burned off by the napalm. She was not expected to survive the severity of her burns & has endured countless painful surgical procedures, including skin transplantations. The bombing killed two of their cousins & two other villagers.

Then US president Richard Nixon questioned the authenticity of this photo for the same reason Assadists deny Syria gassed civilians in Khan Sheikhoun. They do not want Assad’s war crimes used against him to expose the character of his dictatorship in the way this photo exposed US war crimes in Vietnam & strengthened international antiwar opposition.