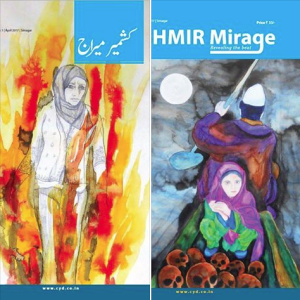 Rollie Mukherjee’s artistic work on Kashmir will be the cover of Kashmir Mirage journal on the stands tomorrow.

Congratulations, Rollie. It is a tribute to the power of your art & to your commitment to ending the occupation & to Kashmiri self-determination–& to the inspiration your art gives to building international solidarity.

Many are tripping up over Syria because they think in formulas about US regime-change combined with what can only be called an orientalist attitude toward Arab regimes. It’s simple-minded politics including from those who call for “nuanced” analyses of Assad’s dictatorship.

The differences between Iraq under Saddam Hussain & Syria under Assad are substantial & so is US intervention. The decisive difference is that Syria has a popular revolution against Assad as part of the Arab Spring; Iraq did not have a mass uprising against Hussain. The resistance in Syria to Assad, Russian, Iranian, US intervention is primarily coming from the revolution. The militias are both pro-Assad & pro-revolution; others are psycho operations.

If you try to impose a US regime-change matrix on both Iraq & Syria & derive your politics from that, you will end up where all Assadists & orientalists do: denying political agency to the Arab regimes at the same time as becoming the champions of dictatorship.

Does the US have a strategic orientation to the Middle East? Of course. But the Pentagon doesn’t call all the shots. Arab regimes have their own interests at odds with the US & these need to be brokered with a long-term approach. For now, the one thing they agree on, the collaboration between Assad, Putin, & Trump in Syria rests on, the bombing of Yemen, the massive repression in Bahrain & Egypt, is the need to destroy every vestige of the Arab uprisings against dictatorship. They can all abide tyranny but none abide democracy.

Jonathan Cook has long been an invaluable writer on Palestine but on Syria he’s been completely lost for a while. He doesn’t write often about Syria but his sources are always regrettable, Assadist, & exhibit little exploration of an issue that profoundly impacts the fate of Palestinians. Because of his cogency & clarity on the Palestinian struggle, many keep hoping he’ll start to show some investigative integrity about Syria. Hope is fading fast. So is Cook’s credibility.

Unfortunately he’s now joined the Assadist cry baby chorus doing the “Wah-wah-wah, we’re maligned for supporting Assad & portraying the revolution against Assad’s dictatorship as Wahhabi/Salafi head choppers. We’re being blacklisted & smeared & we can’t take it any more.” In the inimitable words of William Shakespeare: cry us a river.

In a March 7th, 2017 blog entry titled “Is the BBC still lying over Syria footage?” Cook championed the work of Robert Stuart who has spent four years trying to prove footage at an Aleppo hospital of victims of a Syrian incendiary chemical attack on a school is staged. That attack was in August 2013 & while tenacity at getting to the truth is admirable & necessary, what’s stopping Cook from investigating allegations of Syrian & Russian carpet bombing of civilians in several Syrian cities with thermobaric, barrel, cluster, smart bombs & missiles?

No one is expected to know everything in a world of such complexity & deceits. But the fate of Palestinians is dialectically related to the fate of the Syrian revolution against dictatorship & if Cook doesn’t get that or stands on the wrong side crying up a storm that’s he’s maligned, maybe he should consider taking up tiddlywinks.

Ever since Rania Khalek made it fashionable to be a cry baby & whimper about persecution when she gets criticized for being an Assadist & supporter of Russian & Syrian bombing of civilians, a whole new crew of Assadists are making the unseemly whimpering a Greek chorus of “Wah-wah-wah, I’m being blacklisted & maligned. Ugly McCarthyism is doing me in for supporting Assad. I don’t really support him after all; he does bad things. I just vilify the revolution against him as all head-choppers.”

There is no blacklist, there is no new McCarthyism. That’s just ‘alas poor Khalek’ rubbish. There’s revulsion at the grotesque misrepresentation of revolution against dictatorship as a jihadi, head-chopping operation. It’s the kind of revulsion fascists & KKK creeps also get from human rights & antiwar activists.

If people don’t want to associate with Khalek, Blumenthal, Norton, & all the other creeps blithering about Wahhabism/Salafism & other things they don’t know a damn thing about, that’s life in politics when people morph from left to right, from antiwar & human rights to Assadist apologetics & pro bombing of civilians. That isn’t a blacklist. That’s a commitment to political integrity & to the power of social revolution against dictatorship. If Khalek & her Greek chorus of chumps & scoundrels & fools don’t get that, if they want to be popular again & get a lot of likes on FB, they should reconsider their descent into right-wing hell like other opportunists do. Otherwise just stfu & accept the consequences of alliance with David Duke & David Icke.

This is the disembodied arm of a refugee who drowned this week in the Mediterranean just off the Libyan coast. His body was retrieved by the private rescue group named Proactiva Open Arms. Ironic that.

We aren’t told how many other bodies were retrieved in this rescue operation. Was this the one last Wednesday where 146 refugees drowned & the only survivor was a 16-year-old boy whose life will be forever changed? Or was this another mass drowning?

It happens so often it probably doesn’t seem important for media to report. It probably seems wiser not to discomfort us by telling us just how many are drowning: almost a thousand so far this year, in just three months. But that figure is just an estimate anyway. No one’s really counting how many dinghies & boats leave Libya or how many are crammed into each boat. They’re only poor people after all. It’s not like they’re human beings.

We are not discomforted. We are outraged that human life is treated with contempt & human death is treated in a disembodied way to hide reality from us. There are tens of thousands of refugees massed on the borders of Europe, northern Africa, & the US living through harsh winters & inclement weather because of barbaric immigration practices which governments are whipping up racism, Islamophobia, “jihadi-phobia,” & xenophobia to justify.

The mantra of immigration rights is no human being is alien to us, no human being is illegal. They are all one of ours. Open the damn borders. Immigration is a human right. Asylum for refugees is mandated by 4 million years of evolution & civilization.

If the US & Russia spy on each other, who gives a hoot? That’s how their kind of politics is done. If capitalists can’t trust each other, distrust is how the system works. If Trump & his minions make unsavory financial deals with Putin & the oligarchs, that’s how capitalism operates in its period of decay.

The problem with Trump’s backdoor dealings with Russia is not backstabbing the CIA or FBI but the deals made at the expense of Russian, American, Syrian, & other working people. That’s where the treason comes in. That’s why capitalism stinks. The governments work at odds with us, not for us. 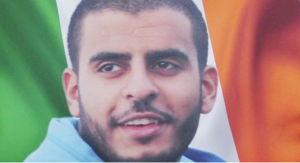 Libertarian Trump supporters think Michael Flynn is being framed. The rest of us want to know: what does Flynn know about Trump’s dealings with Russia & when did he know it was treason?

The retired CIA & FBI agents who lead the US antiwar movement & Hands Off Syria Coalition are writing up a storm about the surveillance state & Russiagate. It’s a good thing they had their pensions in hand before they went off the deep end.

Maybe they could explain to us why all that deep state crap didn’t scare them for the several decades they drew a paycheck spying on Russia & the rest of us.

If you’re concerned about the Kremlin & Putin in all this Russiagate stuff, I really get your angst. I really do. But could you unfriend me anyway? I prefer sane people as friends.