Went to check on Twitter if Charlie Hebdo had died yet. It’s psychosexual level remains that of an adolescent boy saying naughty words that could get his mouth washed out with soap. It’s political level is still that of a braying ass. (With all apologies to the ass for such an invidious comparison.)

Don’t know about the rest of you but the Facebook policy of covering photos it deems sensitive annoys the bejesus out of me. Photos that appear all over media are considered offensive here. 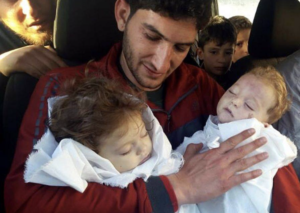 Remembering the Syrian chemical attack on Khan Sheikhoun on April 4, 2017. Seventy-two civilians, including 20 children, were killed. The White Helmet rescuers & other witnesses say the attack was notable for its barbarism with men, women, & children gasping for air & foaming at the mouth.

Here Abdul-Hamid Alyousef holds his twin babies who were killed in the chemical attack along with his wife, two brothers, nephews & several other family members. The Assad regime, its propagandists & their guppies in the antiwar & socialist movements, drawing on the ideology of the ‘war on terror’, call them “Wahhabi jidahi terrorists.” We call them brothers & sisters.

Cease the bombing of civilians in Syria. All foreign military forces out of Syria.

Australia has passed a law in response to live-streaming of the New Zealand massacre on Facebook. It will fine social media companies & imprison executives for up to three years if violent content is not removed “expeditiously”. The question is, who defines what is violent content?

Animal control tells me it wasn’t an anaconda hole but rather a minor sink hole. Big enough to swallow me but minor to animal control. 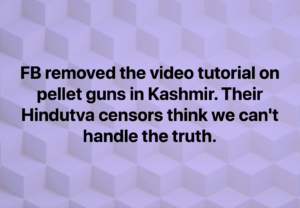 Please take a moment to sign this pledge to boycott Nestle & Starbucks.

The Iranian government asked Foreign Minister Javad Zarif to meet with the group when it arrived since the delegation went there to express solidarity with the repressive Iranian government & not to meet with dissident political groups opposed to theocratic rule & to Iranian military intervention in Syria. February 25th was the day Assad was on a state visit to Iran. Zarif (who has been Foreign Minister since 2013) was miffed that he was excluded from that meeting & forced instead to meet with a group of half-baked groupies from the US. So he resigned that very day. (It was a stunt on his part & Iranian president Rouhani refused to accept the resignation.)

Upon his resignation, Benjamin tweeted her high regard for Zarif. High regard for a man described by most sources as a sleezeball? A man who defends, without blanching, all the excesses of the Iranian government, including ordering women what to wear, repression of Kurds, arrests of journalists (46 currently in jail in Iran), persecution of homosexuals, & worst of all, military intervention against the Syrian Arab Spring? Of course the Code Pink delegation fully supports the Assad regime & Iranian & Russian intervention in Syria. It’s a surprise they didn’t beg to also meet with Assad so they could kiss his ass too.

Code Pink has substituted the politics of spectacle & grandstanding for building a mass social movement to oppose the several US wars. Not rooted in movement democracy, it has lost its bearings completely when it forges links with repressive regimes under the imbecilic rubric of “regime change operations” & does not stand with the people of Iran & Syria. Shame on Code Pink as they limp at a steady pace into oblivion.

“India has made these highways in Kashmir ONLY for the smooth travel of its Occupying forces, while the collaborators always try to fool people into voting by promising better roads and highways. This rightwing thuggish government with its hateful policy is unmasking Indian presence in Kashmir for what it is and has always been: brutal bloody occupation.”

“Closing highways to civilian traffic so that army convoys can move smoothly for two whole days in a week simply demonstrates, like everything else india does here on a daily basis, that “Kashmir Dispute” is nothing but a deceptive term coined for Indian Military Occupation of Kashmir. Period.”