It was reported in February 2019 that an independent review of workplace culture at Amnesty International showed a “toxic” environment with widespread bullying, public humiliation, discrimination & other abuses of power. Staff reported widespread racist & misogynist discrimination along with the targeting & mistreatment of LGBT employees.

Perhaps in trying to get to the bottom of this toxic work environment, Amnesty should take a look at its aggressive campaign to decriminalize prostitution & its efforts to shout down the Nordic Model. The Nordic Model is not just promoted by former prostitutes, feminists, & human rights workers but by over 600 organizations including trade unions & rape crisis centers. Amnesty frames prostitution as sex work, pimps & brothel owners as legitimate business operators, & johns as customers. But prostitution is on a continuum of violence against women which teaches men & boys that women’s bodies are play things, commodities, & that women are not fully human. Amnesty’s policy, implemented in 2016, was bankrolled & promoted by one of the leading pimps in England. If Amnesty publicly promotes sex for sale, the commodification of women & children in the name of human freedom, it is no wonder that its internal work climate reflects that ignominy.

Two prominent socialist organizations, one in England & one in the US, recently went through crises over rape allegations against one of their male leaders. In the postmortems, many are speculating that the problem was the organizational form of the groups. It’s much more likely that it’s the politics of those groups where they both aggressively campaign for decriminalizing prostitution as sex work, where they glorify the commodification of women & children as just another way to earn a living when it is the sexual exploitation of the poor, declassed, & vulnerable. 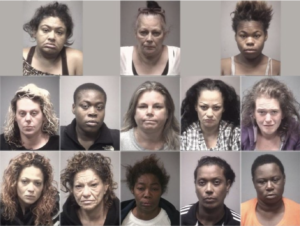 What these apologists for the oppression of women do not see is that the same political forces who lobbied against the Nordic Model–the pimps, traffickers, & call girls who thrive from turning women & children into commodities–are the exact same people that media sources are citing to prove the Nordic Model is a failure. One source they cite for statistics is Ugly Mugs, an internet site run by one of the biggest pimps in Ireland & the other is a prostitute named Kate McGrew who speaks for a group of prostitutes which may not include any actual members. You cannot tell the difference in the campaign to prevent the Nordic Model from the recent spate of articles proclaiming its failure. But if you’re trying to document your prejudices, that kind of research is good enough.

There are problems with the Nordic Model & not just in Ireland but Norway & elsewhere. That problem is that the police do not enforce the law by arresting those trying to buy sex, including from trafficked children. There have been no prosecutions of any kind in all of Ireland for pimps, traffickers, brothel owners, or johns. Using sophistry, the proponents of a complete free-for-all in prostitution try to distinguish between trafficking & paid sex between ‘consenting adults’. But pimping is on a continuum with trafficking. Declassed women & certainly children are not free agents when most of them are trafficked, addled with drug addiction, or coping in a self-destructive way with child sexual assault which is true for a majority of prostitutes.

The argument that prostitution is just a job ignores the homicide, rape, & violence rate involved in prostitution. It ignores the commodification of women & children, the reduction of their humanity to the equivalent of soybeans or pork bellies. Meanwhile the trafficking of women & children continues to grow exponentially in every country & fundamental to trafficking is pedophilia, racism, hatred for & violence against women. Those who call it sex work to sanitize its image claim it is patronizing & sex-negative to consider prostitution a scourge on humanity, a debasement of womanhood. Do they seriously want to argue that furtive sex with strangers in an alleyway or at a truck stop is sex positive? Would the middle-class proponents of decriminalizing prostitution want such a degrading, dangerous occupation for their own daughters? Prostitution is not the oldest profession but it is certainly one of the oldest oppressions despite being glorified in art & film.

(Photo is the real faces of prostitution from women arrested in New Haven, CT 2016)

This is the remarkable story of Behrouz Boochani who recently won highest literary honors in Australia for his memoir written one text message at a time from detainment at the Manus refugee camp maintained by Australia.

If it were all just about raking in the ‘likes’ on social media, it would be the line of least resistance to swallow the Assadist poison & just gibber on about ‘regime change operations’ by Mossad & the CIA in Syria & the other Arab Spring uprisings. But it’s not about a worthless popularity. It’s about antiwar & human rights principles & above all about standing with those being vilified & turned into monsters & terrorists to serve the militarist interests of predatory nations like the US & Russia. You have to be willing to be in a minority of opinion. But in this case, the voices of oppression are the minority hellbent on shouting down the voices of emancipation represented by the Arab uprisings, by Palestinians, by Kashmiris, Uyghur, Rohingya. We have to be confident that if we stand on principle against hatred of Muslims, that in the not-so-long run, truth will triumph over the propaganda that turned a dictator into a champion of democracy.

It staggers the mind when a Muslim or Jew does not see the antipathy & hatred for Muslims & Jews or the ‘war on terror’ rhetoric written all over Assadist propaganda. It represents a profound debasement in political analysis when hatred is mistaken for liberation.

This family traumatized by Syrian bombing of civilians are called “Wahhabi jihadi terrorists” by Assad propagandists & their guppies in the antiwar & socialist movements. Such a monstrous betrayal of principles signals the need for a new movement as the corrupted one limps it way to oblivion. 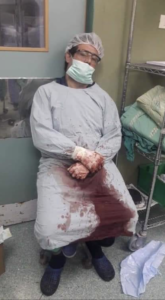 Exhausted Palestinian doctor Mosheer Amer who is treating those injured in the Great Return March on Saturday. 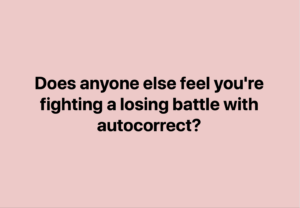 In a senior moment I forgot that I just posted this video by Basharat Amin on the miscarriage of justice in the case of little 8-year-old Asifa Bano who was monstrously gang-raped by grown men in January 2018 in Jammu.

Can Kashmiri friends update us on where justice for Asifa stands?